No shock, McClendon out as Mariners manager

Lloyd McClendon lobbied to return to the Mariners in 2016, but new general manager Jerry Dipoto had permission to make his own choice, and it wasn’t Lloyd. 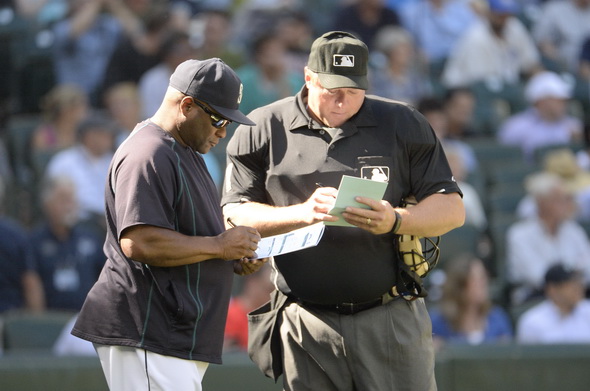 The Mariners made it official Friday, announcing that Lloyd McClendon will not return as manager of the club next season. The firing has been widely anticipated since Jerry Dipoto was hired to replace Jack Zduriencik as general manager two weeks ago.

“I have a great deal of respect for Lloyd, as a person and as a manager,” Dipoto said. “It is a credit to his professionalism that the team continued to play hard through the final day of the season. However, after extensive conversations it became clear to me that our baseball philosophies were not closely aligned.

“On behalf of the Mariners I want to thank Lloyd and his staff for their hard work the past two seasons, and I wish him the best moving forward.”

Dipoto spent his first week on the job getting to know McClendon, obviously as a courtesy. McClendon two years ago forecasted a “golden age” for Mariners baseball that didn’t come  to pass under his two-year watch, although he leaves with a 163-161 Seattle record, the only manager besides Lou Piniella who had a winning mark.

Dipoto also received permission from team ownership to make his own managerial choice and did the expected, letting McClendon go with a year remaining on his contract.

Tim Bogar, who managed the Texas Rangers for 22 games at the end of the 2014 season after Ron Washington resigned, is a leading candidate to replace McClendon. An Indianapolis native who played for the Mets, Astros and Dodgers from 1993-01, Bogar spent this past season as a special assist to the GM of the Angels which, until July, was Dipoto.

The Mariners went 87-75 in McClendon’s first year (2014) and were eliminated from the playoffs on the final day the regular season. The club regressed this past season to 76-86 and was never in contention for a division title or wild card spot after the All-Star break.

McClendon publicly lobbied to keep his job, but his old-school approach to baseball was reportedly at odds with Dipoto’s preference for inclusion of advanced statistical data in analyzing players.

The Mariners have employed six other full-time and two interim managers since Pinella left the franchise following the 2002 season. None had a winning record. When the Mariners hire their next manager, they will tie the Marlins for most full-time managers since 2002, the year Piniella left.