Thiel: McClendon let himself get run out of job

New GM Jerry Dipoto fired Lloyd McClendon Friday, a predictable event once it was clear McClendon was no more adaptable to new information than was Dipoto’s manager in Anaheim. 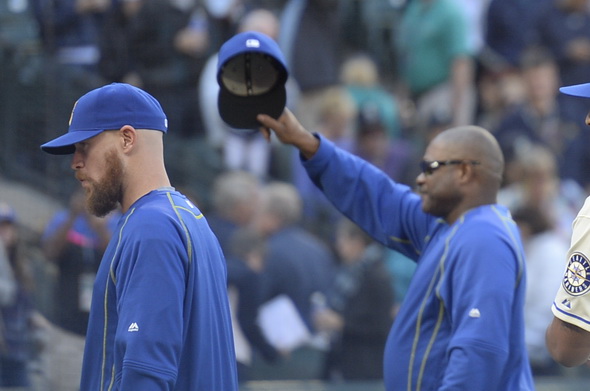 Lloyd McClendon probably knew the moment he learned of the firing of general manager  Jack Zduriencik in August that he was done as Mariners manager. Any lingering doubt was made moot by the hire of Zdurinecik’s replacement, Jerry Dipoto, who clashed with his manager in Anaheim, Mike Scioscia, a classmate of McClendon’s in The Old School.

But after his final game Sunday, McClendon still seemed to be lobbying for his job.

He knew well that the postseason was reachable in both of his Seattle years, if for no other reason than the advent of a fifth playoff berth made it attainable with a modest record of seven games above .500. He also chose to make a point that his players played hard for him, thereby indirectly endorsing his ability to motivate.

“They came out and played hard every single day,” he said. “I’m very proud of this club. They gave everything they had. Some days were better than others. I can’t fault the effort.

“I try not to think about what-ifs. (Knowing that) 86-87 wins gets the playoffs is a little frustrating, but there are no regrets.”

In those words were the explanation of the sinking of McClendon’s tenure, at least as it relates to what is valued in baseball today.

Playing hard is a good thing, but not playing hard virtually is career suicide for every big league player who is average or less, which is most of the Mariners roster. As much as some managers and many fans believe otherwise, the intensity that a player brings to a 162-game season is strictly under the control of the player.

The manager may be responsible for getting a player to play a little better, but harder? No. The season is too long and the money is too much and too hard to get to long indulge a lollygagger. No credit is given, then, for big leaguers playing hard. It’s a requirement.

As to McClendon’s frustration at being left out of the playoffs, it is understandable, particularly given the parity in the American League. But injuries and poor production from key players aside, McClendon had under his control multiple small aspects that could have been difference-makers in a season when the Mariners were so close to winning a lot more often — they had club-record and major league-high 23 extra-inning games, and 27 of their defeats came in the opponents’ last at-bat, also a major league high.

The Mariners’ lineup included a lot of Zduriencik-favored brawny types ill-suited to steal a base, advance to third from first on a single, or score from third on a medium fly ball. Yet there seemed to be a perpetual green light under McClendon. For a roster hard-pressed for much of the season to create baserunners, squandering such a valuable asset was inexcusable.

Bad baserunning was not the worst problem in a lackluster season. It can’t be proven that 10 outs saved with smart baserunning would have produced another half-dozen victories. But the Mariners ran themselves out of numerous games, which is something that McClendon could have controlled. He failed to give his team the best chance to win.

That’s what Dipoto believes advanced analytics can do. The stolen-base failure rate isn’t advanced analytics; it’s merely obvious. But information about runner/pitcher/catcher tendencies is valuable. The information is simply a tool, not voodoo, that quantifies performances and offers predictive outcomes. Dipoto understands its value. McClendon does not.

That’s why Dipoto offered his surprisingly candid explanation for firing McClendon Friday despite a winning record of 163-161: “After extensive conversations it became clear to me that our baseball philosophies were not closely aligned,” the club release quoted him as saying.

Dipoto did not want a repeat of his experience with Scioscia, who won the Anaheim argument when owner Arte Moreno sided with his 16-year manager. He wants a manager who will work with the more granular information now available to put the Mariners in the best position to win.

Adapting is not easy. The amount of information available for each key situation can be overwhelming. But with MLB pitching so dominant and run production down, every at-bat, every baserunner is more important than they were 10 years ago.

The game has grown too strategically intense to rely upon a three-run homer to fix things.

“At what turned out to be his final presser, McClendon said another curious thing, referencing the Mariners’ backslide from 87 wins to 76.

“Sometimes when you’re on the verge of winning, most clubs take a step back,” he said. “It’s unfortunate.”

Such things have happened. That doesn’t mean there aren’t ways to prevent it, in part by using every available tool. As baseball is again showing in the playoffs with the ouster of the 98-win Pirates, and World Series favorite Toronto down 0-2 to the Texas Rangers, margins are excruciatingly thin.

Baseball remains a fluky sort of game because it is put in motion by a round club striking a round object. The potential outcomes may seem endless, but they aren’t. After more than 100 years of data at everyone’s disposal, the key is to learn a little more than the other team about potential outcomes.

The data helps instruct about one’s own team too. If a roster is full of slow guys, it’s good to know to hold ’em. Otherwise you fold ’em until next year.