After years of failing to live up to expectations, Andy Dalton has emerged as the hottest quarterback in the NFL with 9 TDs, 1 INT and a 123.0 passer rating. 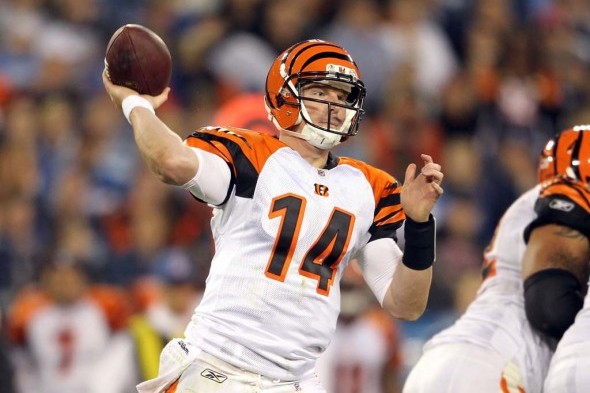 Few quarterbacks in recent NFL history have endured as many TV/Internet bashings as Cincinnati’s Andy Dalton, who, frankly, has brought most of the criticism on himself. Dalton’s biggest shortcoming: His 0-4 record and 57.8 passer rating as a playoff starter. Only one other quarterback in NFL history lost his first four postseason games, Y.A. Tittle (1948-64).

Exasperation over Dalton, a second-round pick by the Bengals (35th overall) in 2011, peaked in July when the Texas Christian University grad participated in a celebrity softball event at Cincinnati’s Great American Ballpark prior to the MLB All-Star Game.

He was booed, heavily, during his at-bats.

“That hurt,” Bengals offensive coordinator Hue Jackson told SI.com’s Peter King Thursday. “When you have had the success he has had – four seasons in the league, four times in the playoffs – getting booed in your own city, that has to hurt a bit. But I truly believe that was a turning point for Andy.”

The turn is abrupt. Aaron Rodgers and Tom Brady aside, Andy Dalton is probably the last quarterback the Seahawks need to see Sunday as they continue to recover from an 0-2 start. Long considered an underachiever, Dalton has suddenly emerged as mega-elite.

Due to the new-and-improved Dalton, Cincinnati leads the NFL in explosive pass plays (25 yards+) with 15, four more than Rodgers and the Packers (11) and well ahead of Seattle’s eight.

“They’re loaded,” Pete Carroll said of the Bengals, and for once Carroll wasn’t engaging in hyperbole. “Dalton has been on the mark, really hitting his stuff, and he’s been protected well. So it’s a big problem. They’re making trouble for everybody and we’re going to try to minimize that as best we can.”

”I think Andy gets in rhythm and just delivers the ball, and he’s doing it great right now,” added CB Richard Sherman. “He’s finding his spots, he’s getting his receivers the ball where it’s supposed to. He’s hitting his receivers in stride and his receivers are doing a great job after the catch. I think he’s being smart with his decisions, not forcing anything, taking his chances whenever they are there.’”

It’s not often a modern quarterback winds up on a list that includes Hall of Famers from the 1940s, but Dalton’s performances against Baltimore and Kansas City the past two weeks landed him there.

Against the Ravens, Dalton averaged 11.97 yards per attempt (32 attempts), and then followed with 13.38 against the Chiefs (24 attempts). Those are the top two single-game marks of Dalton’s career and they increased his yards-per-attempt for the season to 10.23. For that stat, these are the top seasons in NFL history, Dalton shown for comparison purposes:

The other big number in Dalton’s portfolio: in addition to being one of the least-sacked quarterbacks in the league (16 fewer than Russell Wilson), Dalton has tossed only one interception (his 0.9 INT percentage ranks second in the NFL) in 116 pass attempts. Dalton will face a Seahawks secondary that has yet to record a pick.

“Yeah, that eats at me,” Carroll said this week. “We’re extremely committed to getting the football and taking it away. But you’ve seen some games and some ways that people have thrown the ball at us to maintain their possession of it. We had a lot of quick throws against us last week from a very high-powered offense, and the week before (Chicago) they were very careful with the ball.

“When you play here, we’ve taken the ball off people pretty consistently for years, so it’s a good way to try to nullify that factor. I think it’s a combination of stuff, but (interceptions) are going to come in bunches now. It’s going to happen.”

If the Seahawks don’t record an interception Sunday, they will tie the franchise record most consecutive games without one. The longest such streaks:

Cincinnati is one of five teams with a 4-0 record, and the Seahawks have never defeated a 4-0 team on the road. The caveat is that the Seahawks have only played one such team in their 40 years. They lost that one 30-23 at New England in 2004.

The Seahawks have faced a 3-1 team away from home 10 times. They are 5-5 in those contests, including 2-0 under Carroll. But in neither of those wins did the Seahawks face a quarterback as hot as Dalton.

“This is his team, his offense. He knows it now,” said Pro Bowl teammate A.J. Green.