The Seahawks built a 24-7 fourth-quarter lead and rookie RB Thomas Rawls rushed for 169 yards, but squandered it all and lost 27-24 in overtime at Cincinnati Sunday. 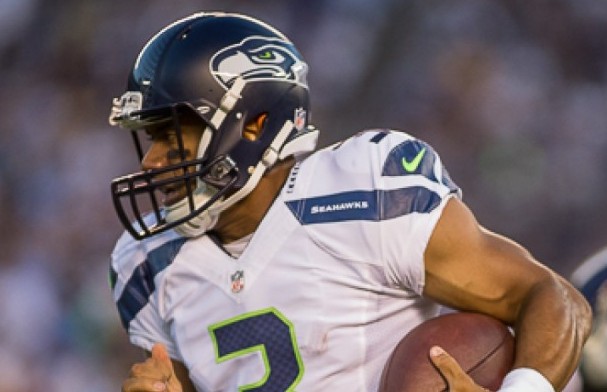 Russell Wilson threw one TD and one INT Sunday, but couldn’t generate offense in the fourth quarter or overtime./ Drew Sellers, Sportspress Northwest

The Seahawks frittered away a 24-7 lead in the fourth quarter and fell to Cincinnati Sunday at Paul Brown Stadium when Mike Nugent’s 42-yard field goal attempt at 3:36 of overtime hit the left upright and bounced through, giving the Bengals a 27-24 victory. Seattle had not squandered a 17-point, fourth-quarter lead since Oct. 10, 2004, when it led the St. Louis Rams 27-10 and lost 33-27 (box).

Several plays doomed the Seahawks, three in particular. Holding a 24-21 lead with 2:27 remaining in regulation, the Seahawks had a chance to run out the clock by converting a 3rd-and-4. But the Bengals sacked QB Russell Wilson, forcing a punt. Cincinnati drove for a Nugent field in the final second that sent the game into OT . Seattle aided the Bengals’ march with a 27-yard pass interference penalty on CB Cary Williams.

The Seahawks had two scoring chances in OT, the but the first ended when Wilson, hurried by the Bengals’ pass rush, threw short of a wide-open WR Tyler Lockett.  The second failed when, following a personal foul on RT Gary Gilliam that forced the Seahawks to start a drive for their 10, Wilson was sacked again, forcing another punt.

After building the 24-7 lead on Wilson’s 30-yard TD pass to WR Jermaine Kearse, a 24-yard Steven Hauschka field goal, a 69-yard TD run by RB Thoma Rawls, and Bobby Wagner’s 23-yard fumble return, the Seattle offense left the building. Its final six drives ended in Jon Ryan punts. In the fourth quarter, the Seahawks managed only 27  yards. In the fourth quarter and overtime, the Seahawks went 1-for-6 on third down.

Wilson completed 15 of 23 for 213 yards, one touchdown and one interception, which came on a poor decision when he attempted to force a pass over the middle with Seattle driving in the red zone. Wilson finished with a 91.39 passer rating, but was sacked four more times, bringing his 2015 total to 22.

Rawls, who started in place of the injured Marshawn Lynch (hamstring), rushed for a career-high 169 yards, including his 69-yard TD (first of his NFL career), on 23 carries. That’s the most yards in a game by a Seattle running back since 2006, when Shaun Alexander had 206 against Green Bay.

The Seahawks sacked Cincinnati quarterback Andy Dalton four times, but that didn’t offset his 331 passing yards and two touchdowns, both to tight end Tyler Eifert. Dalton had 102 yards and a touchdown before his first errant throw.

Earl Thomas prevented a Cincinnati touchdown in the first half when he picked Dalton in the end zone and returned it 68 yards — Seattle’s first pick of the season. But a penalty on the return by DT Michael Bennett (he hit Dalton multiple times) cost Seattle 51 of those 68 yards. Wilson had 22-yard completions to Tyler Lockett and Graham following Bennett’s penalty, but the Seahawks had to settle for a field goal instead of a touchdown.

Seattle won the turnover battle 3-2, but allowed Cincinnati 173 yards on its final three possessions of regulation.

Cincinnati entered as the NFL’s No. 2-ranked offense, averaging 422 yards per game. The Seahawks “held” the Bengals to 419.

When Cincinnati scored a touchdown on its first possession, a 14-yard pass from Dalton to Eifert, that snapped a streak of 20 consecutive defensive possessions Seattle had gone without allowing a touchdown.

“We had them, but they did a great job of finishing. We just have to get more prepared and improve. We hold ourselves to a high standard.” — Rawls.

“We just didn’t finish and that’s a huge thing for us in this organization. In the fourth quarter and overtime, we didn’t execute. We need to keep grinding until things start going our way” — Kearse.

The Seahawks return to CenturyLink Field at 1:05 p.m. Sunday to face the Carolina Panthers (FOX). Carolina is 4-0 and will be coming off a bye week.