Culprits were many and varied, but the Seahawks’ failures in the final minutes by the offensive line, which couldn’t sustain early success, blew the chance for an important road win. 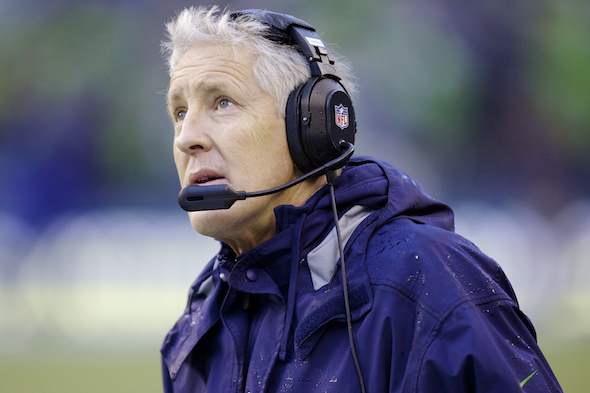 Nothing will top (bottom?) the Super Bowl loss to New England. But the Seahawks in Cincinnati Sunday offered a strong runner-up candidate for premium agony, when the Seahawks blew a 24-7 lead in a way that stumped Pete Carroll.

“That’s why I’m so baffled; it’s startling that it’s happening,” he said after the Seahawks lost 27-24 in overtime to drop to 2-3 while allowing the Bengals to sneak off to 5-0. “All three losses are the same story at the end. We’ve been in this mode — about outlasting, and doing right longer — for three years. For some reason, that didn’t happen.”

It began not happening in NFC Championship against Green Bay, in which a string of near-miracle plays was required to overcome a 16-0 deficit to win in overtime. Then came the certain triumph/certain defeat from one play in the Super Bowl, in which Seattle led 24-14.

This season, the Seahawks have lost twice on overtime field goals, and a third time, in Green Bay, that was to a better team, but still was winnable. Sunday, after allowing a touchdown drive on the opening series, the defense for a long while smothered the Bengals’ No. 2-ranked attack, and on offense solved for the injury absence of Marshawn Lynch with a remarkable 169-yard game from rookie RB Thomas Rawls.

After the 17-point lead early in the fourth quarter that shocked a rare sellout crowd at Paul Brown Stadium, everything ground to to a halt. The Seahawks had one first down in the fourth quarter and OT, while Bengals QB Andy Dalton revived to move the Bengals 206 yards against a tiring defense in the final period and OT.

The depth and breadth of the collapse so stunned Carroll that he couldn’t pinpoint anything, offering up a generic buck-stops-with-me assessment.

“I look right to me when we don’t finish, across the board,” he said, referring to all three phases of the roster. “When everybody doesn’t get it done and finish like we need to, I’ve to  got make sure I’m calling it right.

“It was probably the best job we’ve done this year for three quarters against a good team in a tough situation. It’s really difficult to leave here not winning.”

He couldn’t even muster up the standard bouquet for QB Russell Wilson, who completed 15 of 23 passes for 215 yards, one TD and one pick for a rating of 91.8. He ran three times for 21 yards.

“I really can’t give an assessment until I see the film,” Carroll said. “This film is really going to be important to watch what happened.”

That’s because Carroll is bewildered. They ran the ball well (200 yards), had a 2-1 turnover advantage including a defensive score, and strangled the NFL’s most explosive offensive after its opening drive.

In fact, all the Seahawks needed was one less second.

The Bengals’ final drive in regulation to a field goal that forced overtime required every tick of the two minutes, 13 seconds Cincy had. After the last scrimmage play ended with 4-and-3 at the Seattle 13 with no timeouts and about 13 seconds left, the Bengals managed to scramble their special teams onto the field for PK Mike Nugent’s 31-yarder at 00:00.

Almost plaintively, Carroll asked, “Is there one more second in there for us?”

He meant one less second, but you get his drift. If the Seahawks had burned up a little more time, things might have been different. But the defense on the final series first gave up a 27-yard pass interference penalty on CB Cary Williams, followed by a 25-yard reception by Tyler Eifert to reach the Seattle 20. The Bengals could have kicked the game-winner then, but wisely chose to drain the final minute.

But before the hammer comes down on the defense, consider that it was on the field for 40 minutes.

The decisive culprit in the outcome was the offensive line, again. For three quarters, the unit was having the best game of its tumultuous time together. It helped resurrect the power running game, and actually gave Wilson occasional time to throw from the pocket, including a first-quarter 30-yarder to an undefended WR Jermaine Kearse that answered the Bengals’ first TD.

Yet that turned out to to be the lone Seattle TD drive of the day. Besides a Steven Hauschka field goal, the Seahawks scored on a single-play, a 69-yard run by Rawls, and a defensive scoop-and-score when LB Bobby Wagner picked up a fumble created by a tackle-for-loss by DE Michael Bennett.

The group is still mistake-prone and appeared to wear down as the game went on. Carroll promised last week that the group would be better, because it had to be. And it was better. Just not enough better.

Until it can deliver four quarters, too much pressure is on Wilson and the defense to be near-flawless.

In the big picture, losing to the hot Bengals on the road was little surprise to most, and the Seahawks at 2-3 can still rely on the fact that they were 3-3 a year ago and still made the Super Bowl.

The problem with that reliance is that if they lose next week at home to Carolina, 4-0 and coming off a bye week, they will be out of serious contention for the playoffs.

Disappointed as he was, Carroll expressed his usual rock-like faith.

For the Seahawks and their fans, the film study of the Bengals’ defeat this week needs to be Ph.D-level class entitled, “Hurry the Hell Up.”