Big underdogs Washington and Washington State upended the Pac-12 world with wins at USC and Oregon. Huskies primed to end the long nightmare with the Ducks. 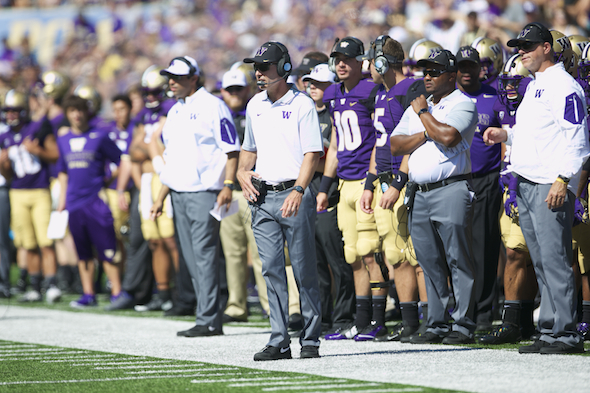 Chris Petersen and the Huskies are upon a turning point. / Drew Sellers, Sportspress Northwest

The natural order of things in the Pac-12 Conference football universe was disturbed the past week, at least the universe since Washington after 2001 flamed out into scandal, despair and Tyrone Willingham.

When double-digit underdogs Washington and Washington State beat powerhouses USC and Oregon on the road, it was like instant climate change: Surf shops on the North Slope, Santa Monica pier in Green Bay and salt water on the Space Needle observation deck.

Freakiest yet, the Utah Utes are the conference’s national representative as the No. 4-ranked team. Logic crumbles at the enormity of its task of comprehension.

The disturbance was breathtaking. Not only was beating the Trojans 17-12 coach Chris Petersen’s signature win at Washington, it was the toe tag on Steve Sarkisian’s career as USC coach. Four days later, Sarkisian was fired for drinking on the job.

The irony is that as Washington coach, Sarkisian’s back-to-back wins over USC (2009-10) were his signature wins, and appeared to open his perpetual bar tab — as well the dewy eyes of Trojans athletic director Pat Haden, who poached a son of Troy from Montlake in 2013.

Haden now has the distinction of creating the situation in which USC has its fourth coach in four years for the Notre Dame matchup Saturday (Clay Helton, Sarkisian, Ed Orgeron, Lane Kiffin). That’s managerial turnover the Mariners can only hope to one day replicate.

Saturday, the perpetually basset-faced Cougars beat the Ducks in Eugene, 45-38 in double overtime, making just about every non-Nike college football fan in the Northwest eager to set a couch afire to honor Coug nation. Coach Mike Leach, whose contract was being examined for buyout clauses by eager reporters after a loss to FCS Portland State, is now trending ahead of Capt. Jack Sparrow on Twitter’s #favoritepirates hashtag.

The disruption has reached a point where the Ducks, who have not lost to Washington since before Lewis met Clark, are 1½-point underdogs when they come to Husky Stadium for a 7:30 p.m. game Saturday that figures to produce whitecaps on Lake Washington.

This changed landscape, his role in it and the pending drama Saturday, has not caused a single hair on Petersen’s surgically crafted hairstyle to displace.

“I think it’s important to a lot of people around here, no question about it,” he said in a way that suggested he was not among revenge-minded purples. “It’s a long-time rivalry, and I think it’s really important. I was on the other side for a while (a Ducks assistant coach from 1995 to 2000) and it was really flipped.

“On both sides, I think it’s an important game.”

But how are you looking at it, Chris?

“This is our next most important game.”

Petersen’s perpetual dial tone does, however, have a bit more resonance now, given that the remaining conference schedule seems to have toughened up, coupled with the fact that the Huskies may have caught the Trojans in, well, happy hour.

“Everybody we play is really good,” he said. “It’s just always got to be that we can’t be super-motivated for one team and kind of motivated for another team. It’s really hard every single week to be off the charts in terms of motivation.”

But when pressed, Petersen will own up to the significance of the Thursday win, internally and externally.

I hope it gives me, our coaches, everything we’re doing around here, some credibility: ‘This will work if you keep just sticking to the process.’ . . . You can have a lot of small victories (in practice and in game performance) that nobody else is talking about — it’s hard for (players) to even pay attention to — but because this is such a game of confidence, it’s nice when it shows up on the scoreboard, as well.”

“It was good being down there; we got some good recruiting done. Everybody has so much respect for that program, (when) you go down there and beat them, there’s a lot of respect because they know what’s there. It’s good for the program. But I think for us to continue moving forward, it’s got to be more than one game.”

Which brings up the Ducks, 3-3 and far removed from the skill level that had them in the national championship game 10 months ago. With a lousy defense and an ineffective three-quarterback rotation, the Ducks are vulnerable.

The Huskies are in a prime position to beat USC and Oregon back-to-back.

After all teeth-gnashing that accompanied Petersen’s 8-6 first season, and with the freshman-rich two-deep roster of his second season, it’s difficult to contemplate. Like orange groves in Moose Jaw.