Seahawks’ starting fullback was arrested in Bellevue Wednesday after the truck he was driving struck another car and injured its driver. His attorneys say he fell asleep at the wheel. 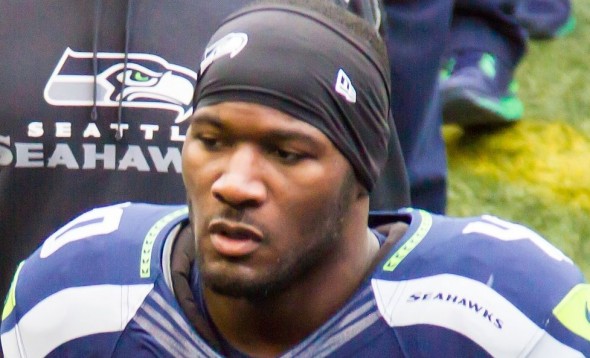 Seahawks FB Derrick Coleman was arrested after he walked away from a two-car collision that left the other driver injured. / Wiki Commons

Bellevue police chief Steve Mylett said Thursday that authorities have reason to believe that drugs or alcohol could have played a part in an automobile crash Wednesday evening involving Seahawks FB Derrick Coleman, a notion disputed by Coleman’s attorneys. Coleman, 24, remains in King County Jail on suspicion of vehicular assault and hit-and-run, both felonies.

The crash occurred Wednesday evening and resulted in a two-car roll-over in the 13600 block of Southeast 36th Street at approximately 6:20 p.m. Coleman, whom the Seahawks placed on indefinite suspension pending “further information,” was not injured, nor has he been charged. The other driver, a man in a Honda Civic, sustained serious “but not life-threatening” injuries,” according to Mylett.

Coleman departed on foot following the crash and police located him “a significant amount of time” later two blocks from the scene, according to Mylett. He was arrested without incident and then submitted to field sobriety tests and booked into King County Jail. Mylett said the results of blood tests for alcohol and drugs could take weeks to process.

Mylett said Coleman had an obligation, under state law, to remain at the scene, and that his department will “continue to investigate and gather evidence.”

“The burden to determine what happened rests with the Bellevue Police Department,” Mylett. The decision to charge Coleman rests with the King County prosecutor.

“As a result of the collision, the Honda Civic was pushed on an embankment, where it came to rest upside down,” Mylett said. “As a result of Mr. Coleman’s actions and subsequent behavior, he was arrested. We did field sobriety tests. He was cooperative throughout.”

After the crash, Coleman, apparently uninjured, walked away. An investigating officer said the other driver was hurt, possibly breaking a collarbone.

Coleman’s attorneys, while acknowledging that the player left the scene, had an explanation for his behavior.

“Our belief is there is a concussion involved,” said attorney Diego Vargas. “He did not knowingly leave the accident.”

“While the facts of the case are still being determined, it seems Derrick may have fallen asleep while driving home from a Seahawks facility. The health and well-being of all is our primary concern, and we are thankful to report that both parties are expected to make a full recovery. We will continue to work closely with the local officials while a full investigation is being conducted.”

Mylett would not comment on whether police believe Coleman fell asleep.

Coleman appeared in 22 games since he joined the Seahawks in 2013. He made six starts, including two this year. Coleman missed the final 11 games of the past season after breaking a foot prior to a game against the St. Louis Rams.

Coleman, deaf since he was three years old, played college football at UCLA and signed with the Seahawks Dec. 5, 2012 after he was released by the Minnesota Vikings.