FB Derrick Coleman was released without charges pending an investigation of a two-car accident, called “complex” by the Bellevue Police Dept. Pete Carroll has yet to talk with a player he calls “significant.” 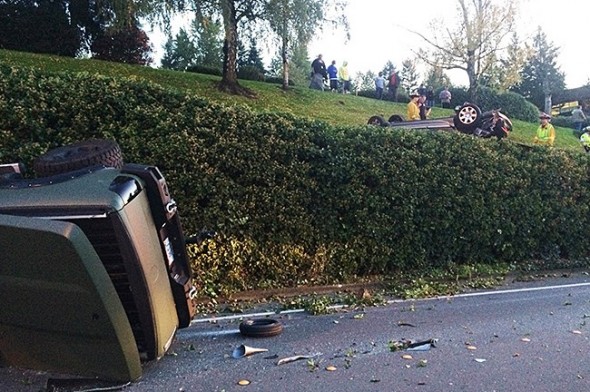 Derrick Coleman’s truck is at left, and the car it struck is overturned atop the slope. / Bellevue Police Dept.

Seahawks starting FB Derrick Coleman was released from King County Jail Friday afternoon after being arrested Thursday by Bellevue police for vehicular assault and felony hit-and-run. A planned court date Friday was canceled and charges will await an investigation.

“A decision regarding charges will be made when the investigation is complete at a later date,” said Dan Donohoe of the King County prosecutor’s office.

The Seahawks suspended Coleman indefinitely after the incident and filled his roster spot for Sunday’s game at the Clink against Carolina.

Coleman had no apparent injuries. Police found him on foot at an intersection two blocks away from the accident scene within four minutes. The police report said he was cooperative.

The driver of the vehicle that was hit by Coleman’s truck was released from Overlake Hospital Thursday afternoon, according to a hospital spokesperson.

Steve Hayne, Coleman’s lawyer, said that if Coleman left the scene, it was because he was dazed from a possible concussion. He also suggested that Coleman, who left Seahawks’ practice facility around 6 p.m. Wednesday, may have fallen asleep at the wheel.

The attorney released a video publicly Thursday (above) that he produced several hours after the accident that included Coleman’s denials he had consumed alcohol or drugs before the collision. Police tested Coleman’s blood, but results of the toxicology report will be weeks away, which is typical because of backlog.

Hayne asked that the Seahawks to reinstate Coleman since no charges were filed.

“Now the police are going to have to find evidence to support the conclusion they jumped to,” Hayne told komonews.com.

Bellevue Police Chief Steve Mylett said that Coleman’s reasons for leaving the scene will be the focus of the investigation.

“Regardless of the reason why, he has a duty to remain at the scene and provide certain information and render aid if he’s able to,” Mylett said.

Bellevue police spokesman Seth Tyler told komonews.com the case is “complex” and “pretty common” to hold off on charges when it appears an investigation will be lengthy.

“They don’t see the judge because they haven’t been charged,” he said. “That gives us more time to complete the investigation . . .  There’s a lot of other pieces we’re still working on, including the search warrants from the vehicles and downloading the data from the vehicles.”

“We’re concerned for everybody’s health, and we’ll make sure that’s the first thing we’re going to take a look at,” he said. “Other than that, it’s not really about the game right now, We just need to see that Derrick’s OK and see what we can do to support him.

“We haven’t been able to find out a word about what’s going on. We’re just really thrilled that he’s getting out and there’s no charges and that kind of stuff.”

Coleman was replaced on the roster by WR B.J. Daniels, who was cut earlier in the week and passed through waivers. The backup fullback is Will Tukuafu, who also plays on the defensive line.

“Derrick been a significant part of our team,” Carroll said,  “so we do have to shuffle some stuff to get that done.”

According to police, Coleman was driving a Dodge pickup eastbound in the 13600 block of Southeast 36th Street about 6:20 p.m. Wednesday when the vehicle struck a Honda Civic traveling in the same direction.

Mylett said Coleman’s car was traveling at “a high rate of speed” at the time of the crash. The speed limit on the road is 35 mph.

Coleman, 24, became an inspiration for the hearing-impaired when his story of athletic success after going deaf as a three-year-old reached a national audience prior to the Seahawks’ appearance in Super Bowl XLVIII in New York.