The Legion of Boom includes three Pro Bowlers — Richard Sherman, Earl Thomas and Kam Chancellor — but results have been uncharacteristically poor so far. 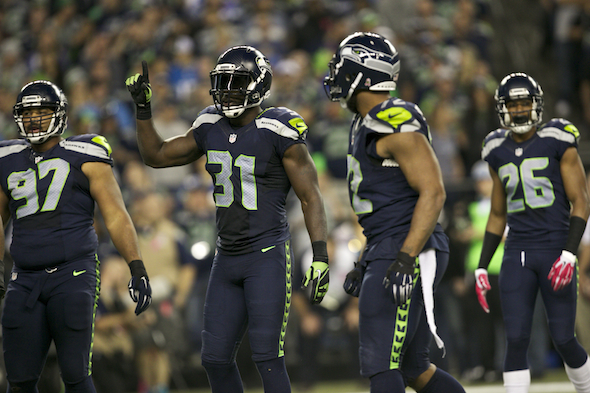 Kam Chancellor and his mates in the secondary are backsliding. / Drew Sellers, Sportspress Northwest

Hard to figure which is more preposterous: that Fernando Rodney, a poster boy all summer for blown saves, could end the baseball season by firing an arrow to cap a World Series victory for the Chicago Cubs, or that the Legion of Boom, rife with three Pro Bowlers, would rank after five weekends among the NFL’s most beleaguered secondaries.

Rodney at least follows a well-documented pattern of ex-Mariners flourishing in new environments. But the Legion of Boom finds itself in alien territory, even factoring in the two games missed by SS Kam Chancellor is a contract dispute.

Two years ago, en route to their Super Bowl vanquishing of the Denver Broncos, the Seahawks allowed a league-low 172 passing yards per game. Last year, that increased roughly 13 yards to 185.6, still the NFL low. This year, that number has jumped to 214.2. It gets worse.

In 2013, Seattle allowed 30 pass plays of 20+ yards. Last year, it allowed 32. This year, the Seahawks have allowed 19 through five games (in the NFC, only San Francisco with 21 and Detroit with 19 have allowed more). That’s a pace for 60, double the total allowed two years ago.

Or maybe not. Two years ago, the Seahawks posted the NFL’s lowest opponent quarterback rating, 63.4. That ticked up last year to 80.4. This year, the number is 97.2. Only five NFC teams are worse, and the 97.2 represents  — so far – the nadir in franchise history:

Lots of chatter this week about Seattle’s blown fourth-quarter leads after the Seahawks couldn’t hold a 17-point, seeming slam dunk against the Bengals Sunday in Cincinnati. But the Seahawks also lost to the St. Louis Rams by allowing Nick Foles to orchestrate a 12-play, 84-yard drive to force overtime in Week 1, and couldn’t hold a one-point lead at Green Bay in Week 2.

A three-year starter and three-time All-Pac-12 honoree at the University of Washington, Shaq Thompson went to the Carolina Panthers the past spring as the 25th overall pick in the first round of the NFL draft. Now Carolina’s starting strong side linebacker, Thompson followed fellow ex-Huskies Danny Shelton (No. 12, Cleveland) and CB Marcus Peters (No. 18, Kansas City) in the first round and preceded Hau’oli Kikaha (No. 44, New Orleans), selected in the second.

Despite losing a record three No. 1 picks, plus a second rounder, the Huskies statistically lost nothing. They have allowed fewer rushing, passing and total yards per game this year than last, and 9.8 fewer points:

So much for being decimated by great players leaving a program.