The Huskies’ offense came to life late and had a chance to win, but Ducks QB Vernon Adams was too much to overcome as Oregon prevailed for the 12th consecutive time. 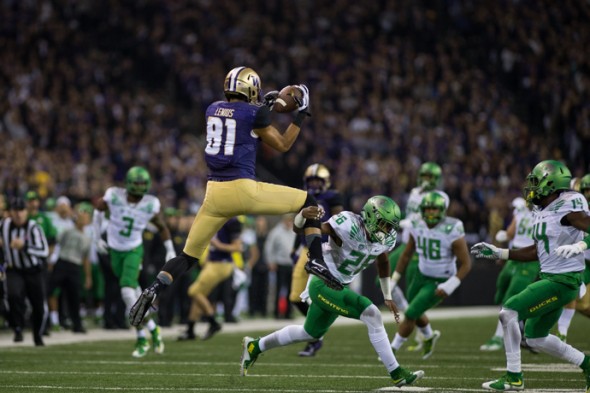 It was a night of the familiar for Washington as the Huskies largely fell flat against the Oregon Ducks 26-20 (box) Saturday night at Husky Stadium. A defender was ejected for targeting, a young core of players failed to produce meaningful results on offense, and the losing streak to the Ducks was stretched to 12 consecutive games, albeit by the closest margin since the one-sidedness began.

With under nine minutes to play in the fourth quarter and trailing 26-13, the Huskies defense managed to halt a 60-yard drive, allowing an inefficient offense an opportunity. Freshman QB Jake Browning led a 12-play, 71-yard drive capped by a three-yard touchdown toss to WR Jaydon Mickens. But the drive lacked urgency, eating 5½ minutes. The Huskies also burned a second timeout on third-and-goal because of personnel confusion, leaving little time to work on their ultimate drive.

Browning had difficulty finding his receivers downfield from the pocket, going 19-of-30 for 199 yards with a TD. Browning’s longest was a 30-yarder after scrambling out of the pocket on third and long to WR Brayden Lenius. The freshman was sacked four times for 28 yards. On the play before the TD pass, Browning injured his shoulder and was replaced by redshirt freshman K.J. Carta-Samuels for the final possession with 1:11 remaining.

Carta-Samuels ran for a first down, but was picked by Oregon’s Ugo Amadi with 24 seconds left to seal the victory.

Myles Gaskin ran for 155 yards on 18 attempts, notably a 72-yard scamper up the middle for a touchdown in the closing seconds of the third quarter. But momentum was largely neutralized by an 86-yard return from UO’s Bralon Addison, which sucked the energy out of Husky Stadium’s near-sellout of 69,285. But the opportunity came to naught when the Ducks shanked a field goal early in the fourth quarter.

Not long after Huskies in the second half welcomed the return of LB Azeem Victor, who sat out the first half as a hangover penalty from a targeting call in the USC game, CB Brian Clay had the same fate, tossed midway through the fourth quarter for leading with his head while tackling WR Darren Carrington.

RB Royce Freeman was held to 138 yards and no touchdowns on 27 attempts. The Ducks averaged 3.3 yards per carry as a team.

QB Vernon Adams, the graduate transfer from Eastern Washington returning from a two-game injury absence, was a load, completing 14-of-25 attempts for 272 yards and two touchdowns. Adams’ mobility gave no end of trouble to the Huskies’ pass rush. He was sacked just twice and often found receivers downfield after extending the play with his feet.

“I don’t pay attention to how long it’s been. It’s like, we’re here and now. I think we have a team, if we play like we’re capable of playing, that could win. And we didn’t. I thought we had too many self-inflicted wounds. I’ve seen us play better. Sometimes that’s what you get with a young team, these spurts where you say, ‘Wow, why can’t they do that every time?’ But it’s that inconsistency.” — Washington coach Chris Petersen.

The Huskies travel to California for a 7:30 p.m. Saturday match with Stanford (Pac-12 Networks). The Cardinal has won five in a row, outscoring opponents by 111 points.