The Seahawks (2-4) blew another fourth-quarter lead Sunday, their fourth this year, losing to the Carolina Panthers and dimming considerably their playoff hopes. 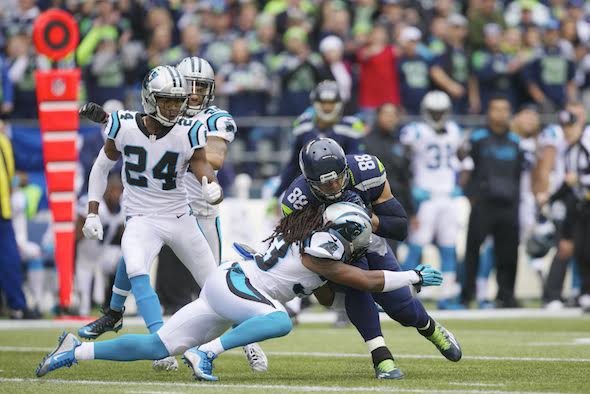 Tight end Jimmy Graham had his best game as a Seahawk in Sunday’s loss to Carolina. / Drew Sellers, Sportspress Northwest

The Seahawks continued their mysterious, almost inexplicable trend of blowing fourth-quarter leads Sunday. They coughed up a nine-point advantage to the Carolina Panthers in the final eight minutes at CenturyLink Field and lost when QB Cam Newton threw a game-winning, 26-yard touchdown pass to TE Greg Olsen with 32 ticks left (box). The Seahawks (2-4) have squandered fourth-quarter leads in all of their losses (St. Louis, Green Bay, Cincinnati, Carolina), outscored 59-10 in those periods.

The Seahawks would have to win all of their remaining games to match last season’s 12-4 record, and probably can’t afford more than one more loss if they hope to reach the postseason.

Trailing by three points with 2:20 to play, Newton engineered what became an 80-yard drive (Carolina’s fourth of 80-plus yards) that reached the Seattle 26. Olsen ran right through Pro Bowlers Richard Sherman and Earl Thomas and caught an easy touchdown pass as Carolina improved to 5-0.

“They (Sherman and Thomas) didn’t get the right signals,” said head coach Pete Carroll, at a loss to attribute the mistake to anything other than miscommunication.

The Seahawks built a 20-7 lead midway through the third quarter on a one-yard run by RB Marshawn Lynch, a 40-yard touchdown pass from QB Russell Wilson to WR Ricardo Lockette and two Steven Hauschka field goals. They extended it to 23-14 with Hauschka’s third field goal. But Carolina scored the game’s final 14 points to win its first against Seattle after four consecutive defeats.

Wilson completed 18 of 30 for for 241 yards, no interceptions and a 96.7 passer rating, but was nearly picked off three times and suffered four more sacks, hiking his season total to 26. He’s on a pace for 69, which would be one of the highest single-season totals in NFL history. Wilson also rushed for 53 yards.

Lynch returned from a two-game injury absence, ran for 54 yards and a touchdown, but had two long gains nullified by penalties. The touchdown was Lynch’s first.

After Seattle took a 20-7 lead, four of its next five drives ended in punts, setting up the Carolina comeback.

Thomas recorded his second interception in two games when he picked off Newton midway through the first quarter on a play that led to Hauschka’s first field goal.

DE Cliff Avril made one of the biggest plays of the game when, in the third quarter, he whacked Newton’s arm while throwing. That made possible a Kam Chancellor interception and saved a touchdown as Ted Ginn Jr., the intended receiver, was running free in the secondary past exposed Seattle CB Cary Williams.

“This puts us in a position of tremendous adversity. This was a difficult loss, as was last week’s (Cincinnati). So we’re going to do everything we can to hang together and find ways to win. What’s important now is how we handle this. But this is going to be very challenging” —  Carroll.

“We didn’t finish once again, and it comes down to the defense. That’s three games we let get away from us this year. The breaks we got last year, we’re not getting this year. It’s not over, we’re 2-4, and we’ve got a lot of season ahead. I think we’re going to turn it around. We just have to learn how to finish. I don’t know how to explain what’s going on” — Seattle LB Bruce Irvin.

The Panthers had never beaten Seahawks at the Clink before Sunday . . . Lynch’s second quarter rushing touchdown was the 55th of his Seattle career, tying him Curt Warner (1983-89) for second place on Seattle’s list behind Shaun Alexander (100). That was also Lynch’s 62nd overall TD, moving him to third behind Alexander (112) and Steve Largent (101) . . . Lockette’s TD catch was his first since Week 3 last year against the Denver Broncos . . . Patrick Lewis started at center in place of Drew Nowak, and Kevin Pierre-Louis received his first career start at linebacker with Bobby Wagner out.