Thiel: From ‘What’s your deal?’ to no big deal

The once-hottest rivalry in U.S. sports has chilled into tapioca, but coming in second Thursday night will assure a lost season for either the Seahawks or 49ers. 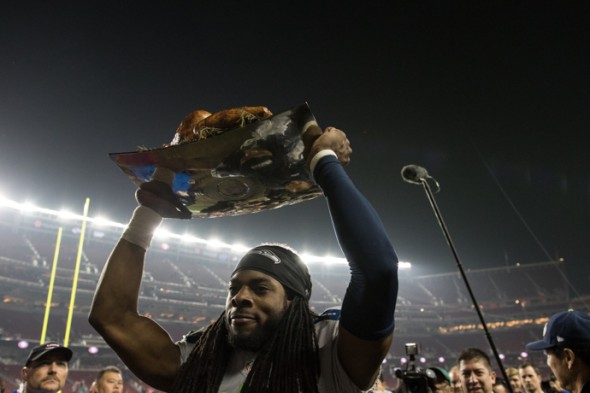 After the Seahawks beat the 49ers 19-3 the past Thanksgiving at Levi’s Stadium, Richard Sherman walked off the field with an additional post-game prize, supplied by a TV network. / Drew McKenzie, Sportspress Northwest

RENTON — It used to be called the What’s Your Deal? Bowl, from the remark Pete Carroll made to Jim Harbaugh when both began disliking each other at their college jobs.

Thursday night, we have the No Big Deal Bowl.

In a single season, the hottest team rivalry in U.S. sports, Seahawks vs. 49ers, has chilled into tapioca. Gone, of course, is Harbaugh, the Yosemite Sam to Carroll’s Bugs Bunny. The former 49ers coach returned to college at Michigan, where he’s teaching a course in Loose Ball Recovery. Next quarter.

Also gone from the 49ers are most of the coaches and many of the players — Michael Crabtree, Frank Gore, Aldon Smith and his attorneys and enablers — that helped make the series between the teams so entertaining.

Gone from the Seahawks are . . . well, fourth quarters. They used to own them. Now it’s three and done.

So instead of colossal kingdoms with fiery leaders fighting for gold, spices and huge tracts of land, we have a pair of 2-4 teams waddling about trying to stay out of last place in the NFC West.

The absence of stakes is big loss. Last season, the Seahawks’ 19-3 win at Santa Clara on Thanksgiving Day so infuriated 49ers owner Jed York that he took to Twitter and offered an apology for the performance of a team that entered the game 7-4.

York’s rant was a cruel public undercutting of the Harbaugh regime that removed all doubt that, despite three consecutive NFC Championship game appearances, he was done in San Francisco.

Mockery took place on the field after the game, when Fox TV rolled out tables upon the 49ers logo loaded with a Thanksgiving dinner, then had CB Richard Sherman and QB Russell Wilson sit down for an interview/feast.

Asked whether in hindsight he thought that scene was a good idea, Wilson acted as if he barely remembered.

“No, I don’t really think anything about it, honestly,” he said Tuesday. “I’m not sure who was running the network, they just asked us to go wherever they tell us to go.”

Fox was trying to pump up the volume for the Seattle rematch in December, also won by the Seahawks, 17-7, making for five wins in the past six. But now that both teams, at least temporarily, have spun out of the spotlight, there is no urge, at least on the Seattle side, to making this game any more annoying than the mere fact of a Thursday night game.

“It’s no different than it was then —  same old, one game at a time,” Sherman said. “Another opponent, another opportunity to go out there and improve and show what we can do.”

“I think it’s always been big, obviously — any time you play an NFL team, it’s always going to be a fight,” said. “Obviously, you play a team that’s in your division, we have a lot of respect for them, and how they play the game and it usually comes down to the wire.”

One guy, however, who seems to buy in to the old drama is the new coach of the 49ers, Jim Tomsula, who became acquainted with the ritual as an assistant.

“That’s one thing around here that we all know, being in this area: that this is a big game,” Tomsula told reporters Monday at team headquarters. “We don’t make any bones about that. Anytime you play Seattle, it’s a big deal. So I wouldn’t expect that we’ve got to get anybody pumped up for this game.”

But for the Seahawks, who still have high expectations for the season, the game is more meaningful because they still have most of the band together that’s been to consecutive Super Bowls, and thus the most to lose.

“It’s a hard league,” said offensive coordinator Darrell Bevell. “It can turn quickly. You can look back to any of the games and the record could be completely flipped. There’s any number of things that can change that. ”

So the match this time may not be about huge tracts of land. But coming in second Thursday assures a lost season.

Another sign the remade offensive line isn’t working: The Seahawks Tuesday re-signed free agent C Lemuel Jeanpierre, 28. The Seahawks cut him before the season when they decided to go with younger, cheaper alternatives, Drew Nowak and Patrick Lewis — and also didn’t want to pay Jeanpierre’s contract that would have been guaranteed for the year on opening day.

But Nowak struggled through the first four games and was benched Sunday for Lewis, who at least has played center for most of his career. Nowak is a converted defensive lineman. But Lewis came out of the Carolina game with a sore knee and ankle. No word yet on who will start.

To make room, LB Brock Coyle (knee) was put on injured reserve/ready to return, meaning he’s eligible to return to practice in six weeks. Jeanpierre, who was at practice Tuesday and will be with the Seahawks for parts of the most recent five seasons, was not picked up by any team since being waived. He started 11 games from 2011-14 when incumbent Max Unger was injured.

The Seahawks also activated FB Derrick Coleman after a five-day suspension following his arrest in a two-vehicle accident in Bellevue Wednesday. Presuming his good health, he’ll likely return to the starting lineup. To make room, CB Crezdon Butler was waived.