A car driven too fast by Seahawks RB Fred Jackson ripped out a metal stop sign and blew through an intersection before striking a curb. Jackson was unhurt; police say there was no racing. 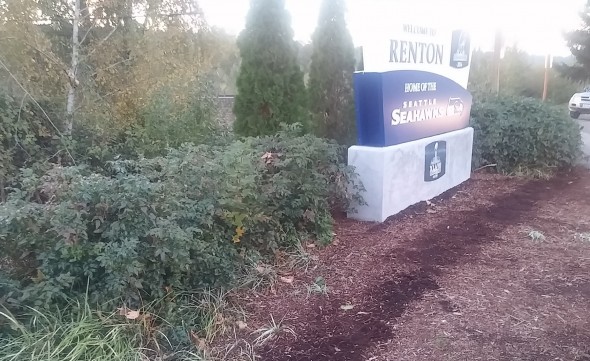 Tire marks in beauty bark show how close Fred Jackson’s car came to the Seahawks sign that is embedded in a concrete base. / Art Thiel, Sportspress Northwest

RENTON — Seahawks backup RB Fred Jackson was unhurt Tuesday afternoon after the car he was driving two blocks from team headquarters sped out of control and ripped out a metal street sign that embedded in the car’s grill, sustaining moderate damage to the car.

Initial reports that Jackson was street-racing a car driven by teammate Marshawn Lynch were false, Renton police said in a statement released in the early evening:

In a tweet, Jackson also denied he was racing.

Thanks 2 everyone worried about me. I lost control of my car. My teammates, including Marshawn, stopped 2 check on me. They weren’t racin me

Seahawks Way, the road where the accident occurred, has a sharp left turn that rises to intersect with Lake Washington Boulevard North. Jackson’s southbound car, a 2016 Corvette, narrowly missed the team’s sign that is embedded in a 2×8-foot concrete base. The car hit a metal signpost across the boulevard and stopped at the curb in the northbound lane.

The police report said Jackson remained with the vehicle and was polite and cooperative with officers.

The Seahawks had finished practice and players were heading home from the Virginia Mason Athletic Center when police received a report of an accident at 4:49 p.m.

A witness said he came upon the accident scene as he drove through the intersection to his home a block away, then walked back after he saw a TV news report that identified Jackson and Lynch from an initial report from TMZ.com. Police had already arrived.

The man, who identified himself as Simon but refused to give his last name, called the intersection “accident prone” and said he has seen other vehicles racing on the two-lane Seahawks Way, or Ripley Lane, its original name.

He said he takes morning walks along the road, which has no sidewalks and is bordered on the west by the VMAC and railroad tracks and on the east by a berm beyond which is I-405, so there are no cross streets. He described walking as “pretty harrowing” and walks facing traffic to see oncoming vehicles.  But he arrived too late to witness any racing.

The accident was the second in a week involving a Seahawk. FB Derrick Coleman was arrested Wednesday after the truck he was driving struck a car that overturned both vehicles in Bellevue’s Factoria area. No charges were filed pending completion of a police investigation. 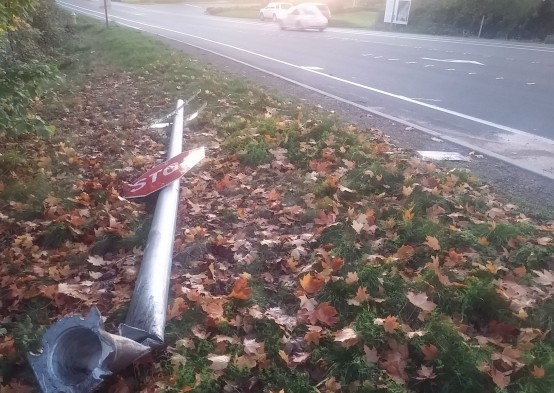 The metal stop sign lays on roadside where it was struck by Fred Jackson’s car. / Art Thiel, Sportspress Northwest