Opposing tight ends have run roughshod over the Seahawks this season, garnering three of the six highest single-game yardage totals of the Pete Carroll era. 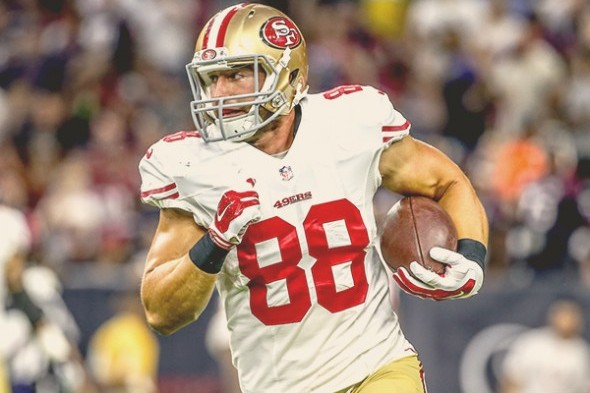 Garrett Celek has emerged as a force in the 49ers offense. / San Francisco 49ers

Scorer of the easiest touchdown yielded by the Legion of Boom — a 26-yard game-winner from Cam Newton through a huge gulf between CB Richard Sherman and FS Earl Thomas — Carolina’s Greg Olsen matched the best yardage day by an opposing tight end against the Seahawks (131, or 18.71 per). No. 2 on the list? Not Kellen Winslow Sr., not Tony Gonzalez, not Antonio Gates.

On Nov. 2, 2008, with the Seahawks en route to a 4-12 record in Mike Holmgren’s final season, the Philadelphia Eagles came to CenturyLink Field and tore through Seattle 26-7. The tight end that day, Brent Celek, made six catches on six targets from Donovan McNabb for 131 yards, the record Olsen tied Sunday.

Thursday night, when the Seahawks play at San Francisco, the Boomers will be focused primarily on three receivers. Richard Sherman identified the trio this week.

“(Colin) Kaepernick’s receivers are playing very well,” said Sherman. “I think that Anquan (Boldin) is always a security blanket for him. Vernon (Davis) is playing well. Torrey (Smith) has been a huge deep threat for him, and I think he trusts him with what he’s been able to do with his speed.”

Sherman did not mention Brent Celek’s younger brother, Garrett Celek, a tight end who went undrafted out of Michigan State in 2012 and has pretty much been been invisible since on San Francisco’s roster. Even in training camp this season, Celek found himself one of eight tight ends trying to earn a roster spot.

He earned that spot. Since then, he has carved out an unexpectedly significant role in the 49ers’ offense. Through six games, he has 14 catches for 131 yards on 21 targets. Only Boldin (47) has been targeted more often. Two weeks ago against the Giants, Celek scored his first career touchdown.

“I think he’s really broken through,” said San Francisco offensive coordinator Geep Chryst. “What a great job Garrett is doing. He’s earned that right to be a starting tight end in the NFL.”

Where the Seahawks are concerned, apparently anybody can be a starting tight end in the NFL, which suddenly makes Garrett Celek a major threat to inflict even more damage on the Boomers.

In the Pete Carroll era (since 2010), three of the top six yardage performances by an opposing tight end have occurred in the first six weeks of this season, as the chart shows:

The Seahawks already have allowed as many touchdowns to tight ends this year (five) as they allowed in the entire 2013 season. They also lead the NFC (Atlanta, Detroit, New Orleans and the New York Giants have allowed four each).