Carroll says RB Fred Jackson, who was cited for a $175 ticket, addressed the team and is “very fortunate” to have injured no one. No kidding. Said he wasn’t racing, but the story may not stop there. 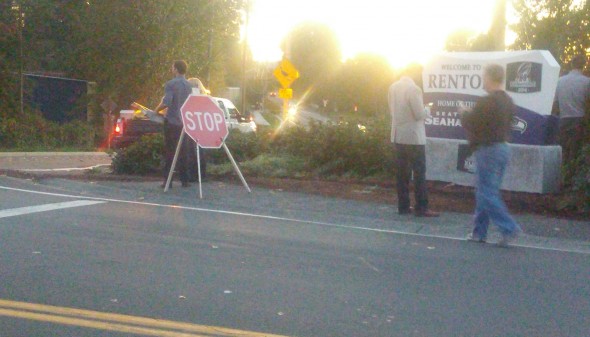 A temporary stop sign was up Tuesday afternoon after RB Fred Jackson wiped out the existing post on his way through this intersection near Seahawks headquarters. / Art Thiel, Sportspress Northwest

As much as some might want to suggest that a lot of Seahawks misery this season is attributable to bad luck, the Seahawks in fact are extremely fortunate today.

That’s because the phrase “vehicular manslaughter” is not part of the news coverage ahead of Thursday’s game in Santa Clara, CA., with the 49ers.

Lake Washington Boulevard off exit 7 on I-405 at 4:30 on a weekday afternoon is a busy place — rush hour traffic, joggers, dog-walkers, cyclists. Those of us whose work takes us regularly to the Virginia Mason Athletic Center know the intersection well. The site often includes fans who hang out and take photos at the “Welcome to Renton / Home of the Seahawks” sign.

That’s the sign Seahawks RB Fred Jackson missed — by less than two feet — when he shot his Corvette through the intersection at excessive speed Tuesday afternoon, crashed into a metal sign pole, then came to a halt in the roadway, blocking traffic.

How neither pedestrians nor motorists were killed or injured at that moment is a bigger mystery than the Seahawks’ play in recent fourth quarters. It’s no stretch to say Jackson and the Seahawks averted tragedy by inches and moments. But Renton police aren’t concerned with close calls — he was cited for inattentive driving, a $175 fine.

“We’re very fortunate nobody was hurt,” Seahawks coach Pete Carroll said Wednesday, understating by two furlongs and a fortnight. “We’re lucky in that regard. He was ticketed.”

At least that assessment was true.

Asked if the episode was a distraction, Carroll answered abruptly, “No,” and moved on.

Not buying that one.

Particularly when it was the second car accident in a week involving a Seahawk. FB Derrick Coleman hit another vehicle and caused both to roll over a week ago in Factoria, was arrested and released, pending charges. Of course, this life-jeopardy stuff is a distraction. Two players risked public, felonious disaster.

“How (the two) happened in a short time, I don’t know,” Carroll said. The incidents were, of course, random, but both happened at the nadir of Carroll’s Seattle tenure, when fans, media and players connect dots in their own special ways to explain the sudden decline of a budding empire. Bad news, it often is said, comes in bunches.

Even before Jackson’s accident, FS Earl Thomas said, “I think we’re not being ourself . . . I think we’re distracted some areas.”

Whether by distraction, tactics or decline in talent, the Seahawks are teetering. The empire hasn’t fallen yet, and it may work itself out of  the spiral, starting Thursday at Levi’s Stadium. But the Jackson episode adds a complication: Whether the Seahawks are hiding something.

Renton police say there was no evidence of racing. Jackson denied it as well. Carroll said Wednesday he was “absolutely” confident no other Seahawks personnel was involved in the episode. But no one is explaining why Jackson, 34 and a married father of three, was traveling so fast on a left turn on an uphill slope and lost control on a street with which he was familiar.

TMZ.com, which broke the original story, Thursday afternoon identified an eyewitness by name who said a driver in a red Dodge Charger was revving engines with Jackson, then the pair took off racing down the street. The witness said he would offer his account to police, but hasn’t been asked.

Renton police did not respond to two calls Wednesday seeking a response to the claim of witnesses. But Thursday morning, a response was posted to the department’s Facebook page: “Regarding the rumor floating out there on cyberspace that there are some alleged witnesses to the alleged Seahawk racing incident that we have failed to interview . . . not true. No one has come to us saying they witnessed anything. We’d love to hear from anyone that saw something. Please call us if you really exist!!”

Before that news, Carroll said he was “disappointed” in the episodes and said he and Jackson addressed the team in a meeting.

“I just wanted to make sure that he told what happened so that they all knew, for the heads up for everybody else,” Carroll said. “Just to keep your eye on the road, and do things right, and drive carefully, and protect the people around you and ourselves.

“It was just a good opportunity for us to make the point, (since) something happened a little bit ago with Derrick. So just wanted to make it really clear to everyone. Fred did a nice job of addressing it and owned up to it.”

For the sake of Seahawks credibility, Jackson had better be telling the truth. If contradictions emerge, the story keeps rolling. From a football standpoint, the timing can’t be much worse — on the season’s shortest work week during a tailspin and facing a division rival at their place.

The only thing worse is having to keep revising the story. Then they will mourn the good old days of the Kam Chancellor holdout.

Nowak back to starting at center

After an ankle injury to Patrick Lewis, Carroll said Drew Nowak will start at center Thursday. He started the first five games before being benched in favor of Lewis for the Carolina game, a 27-24 loss.

RT Garry Gilliam, who reported a sore ankle this week, will play against the 49ers.

In other health news, the shorthanded defense gets back MLB Bobby Wagner (pectoral), DT Frank Clark (hamstring) and CB Tye Smith (hip). Still out on defense are DT Jordan Hill (quad), CB Marcus Burley (hand) and LB Nick Moody (ankle). DE Demarcus Dobbs (shoulder) remains questionable. LB Brock Coyle had knee surgery and will be out a minimum of six weeks after being played on injured reserve / ready to return.

On offense, FB Derrick Coleman is out because of the concussion he had in his auto accident.

Carroll said the wretched condition of the Levi’s Stadium field, site of Super Bowl 50, will generate no complaint from him: “You won’t find us complaining about that or making any issue of that at all, because it’s the same field they’re playing on.” . . . Regarding coach Jim Harbaugh’s absence from the 49ers sidelines, Carroll said, “I do watch the Michigan games. I like watching Jim’s teams. But that’s all. All that talk (of mutual dislike) was really your guys’ talk. It was never my talk, it was your guys’ talk.”