The World Cup champs were at the Clink Wednesday to play a friendly against Brazil, but the event was more about saying farewell to veteran stars and welcoming newcomers for the Olympic team. 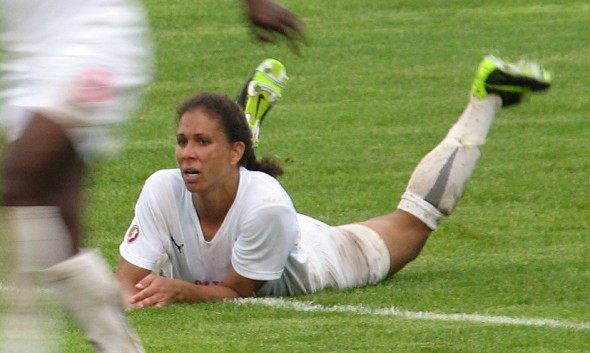 On at least one U.S. national soccer team, dreams do come true. While the men’s squad is still reeling from a 3-2 loss to Mexico, the women’s team is swinging through the country on a 10-game tour to celebrate its World Cup title. Wednesday at the Clink was Team USA’s first visit to Seattle in more than a decade, and produced a 1-1 draw in a friendly against Brazil.

The match was much more than a celebration of a world championship, however. It was a chance to say hello to new players and goodbye to old ones; a chance to reminisce and a chance to plan for what comes next for the most successful organization in women’s soccer history.

That’s not hyperbole. Since the inaugural women’s World Cup, the USWNT has claimed titles in 1991, 1999, and 2015, the latest coming from dismantling Japan 5-2 in the final July 5 in Vancouver, B.C. Added to that trophy case are four Olympic gold medals and one silver out of five tournaments since the women’s game was recognized an Olympic sport in 1996.

What explains this perpetual success? The unique role collegiate athletics plays in the U.S., and the adoption of Title IX in 1978 can go a long way toward explaining the technical development of the deep pool of talent the USWNT draws from. But the team’s success goes beyond talent.

Less tangible factors have helped. For Lauren Holiday, who will retire after Sunday’s rematch against Brazil in Orlando, her career as an athlete is defined by two World Cups; one she watched as an 11-year-old girl, and one where she lifted the trophy herself.

“I got to go to a game in ’99 in Chicago, and I just remember from that moment on always wanting to play in the World Cup and the Olympics,” said the 27-year-old, who said she was retiring to focus on her family. “Those girls were such pioneers for this sport in America, and now in 2015 again we’ve reignited that passion, that love. We’ve captured a nation.”

Holiday’s argument has merit. The final against Japan was the most-viewed soccer game ever for the women’s or men’s game by a wide margin, with 25.4 million tuning in to see the victory. The women’s team also benefited from huge crowds in Canada, averaging 37,732 fans per tourney game.

Head coach Jill Ellis said the tour was an opportunity to thank many of those fans.

“Initially, it’s about connecting with your fans,” said Ellis. “We had amazing support, tremendous support, so part of it is our ability to say thank you, go in to areas we haven’t been in a long time and connect with fans that we knew were behind us.”

Seattle is one of those areas. The national team last played in the Emerald City in 2002, when they had two World Cup qualifiers at Safeco Field. Wednesday’s crowd of 23,603 was the biggest for a USWNT match in the state.

At a time when soccer is more popular than ever in the U.S., the women’s national team grabbed the nation’s attention.

The trick now is for the spark to catch on with the domestic women’s professional league. The National Women’s Soccer League recently concluded its third season with the Seattle Reign as regular-season champs and FC Kansas City claiming the postseason crown.

Professional women’s soccer has never caught on despite the national team’s success. The NWSL is attempting to remedy that, announcing Tuesday the addition of an expansion franchise in Orlando for next season.

Defender Julie Johnston, one of the biggest stars of the USWNT’s summer heroics at the World Cup and a player on the Chicago Red Stars, said that the victory tour can help generate more exposure for the NWSL.

“I think any time you can be in front of fans you can really push for the league,” the 23-year-old said Tuesday. “We all play in the league, and while playing on the victory tour, there’ve been times that you can see us on our club team. We know that we have to keep growing the league for it to be sustainable.”

The tour is also a chance to say goodbye to several players who have elected to hang up their cleats. In addition to Holiday, Sunday’s contest in Orlando will be the final match for defender Lori Chalupny, while Wednesday’s contest was the send-off for Shannon Boxx, a 13-year veteran of the national side.

Ellis had praise for Boxx’s long service: “She’s been one of the most prolific players this program has produced. She’s accomplished so much in her career . . . it’s so fitting that she goes out a world champion.”

Johnston said that the older players, even as they moved toward life after soccer, had as big an effect on the locker room as they did on the public.

“Everyone has a different story to get to this team,” she said. “What they teach, you take upon yourself and put into your own game and what they’re good at, you always want to take from people you see as role models, especially with Boxxy.”

As the applause fades on one batch of stellar careers, the national team is using the tail end of its series of high-profile friendlies to rejuvenate a roster for the 2016 summer Olympics in Rio, where they will pursue a fifth gold medal.

NWSL Golden Boot winner league MVP Crystal Dunn from the Washington Spirit started against Brazil on Wednesday, putting in a solid 71 minutes at forward before making way for Samantha Mewis, another young player with the Western NY Flash. Neither player had more than 16 caps with the national team prior to the start of the tour.

Players such as Dunn are the start of the next generation of the USWNT. Ellis said these last few matches offer her a chance to assess which youngsters will make the cut ahead of the Olympics.

“As the tour starts to fade into preparation, then (the friendlies become) about games, evaluation,” she said. “We have (Olympic) qualifying in February, so there’s a great value in (being able to see young players).”

“I thought (Dunn) did well. She’s been in a couple of games now, but (Brazil) is a different caliber of opponent. In terms of her just getting out there competing and playing and making life hard for her opponent, she did that very well.”

Carli Lloyd smashed in the equalizer in the 85th minute off a cross from Meghan Klingenberg. As it had during the World Cup, the crowd roared its approval, but the real highlight of the match occurred in the 41st minute. Boxx received a roar all of her own when she walked off the pitch for the last time, hugging her teammates as she went; an icon of an era entering a pantheon of idols.

Holiday said that the goodbyes were hard but that she, Boxx, and Chalupny could leave confident that the values that had been passed to them would be passed on.

“We have the young players,” said Holiday. “The veterans before us, the Mia Hamms, the Julie Foudys, they really set a precedent for this team, and Shannon did that for me. I think turning that over, we’ve left things in good hands, I feel very confident that they’ll take over the reins and do a great job.”

Holiday said that passing on the same passion that she felt as a girl in 1999 was her motivation as a player.

“We don’t play for money, we don’t play for fame, we play because we were that girl,” said Holiday. “We were in the stands wanting to be a World Cup champion, and I think that we play to inspire younger players. To be that inspiration, to go out that way, is pretty special.”

As the names on the roster change, so will the eyes in the crowd. While the NWSL seeks to establish a sense of permanence in the American sports landscape, the national team rolls on, ready to inspire with a third star shining proudly over its crest.