The Seahawks (3-4) rolled to a 20-3 lead early in the fourth quarter at San Francisco Thursday night and — for once — didn’t blow it, snapping a two-game losing streak. 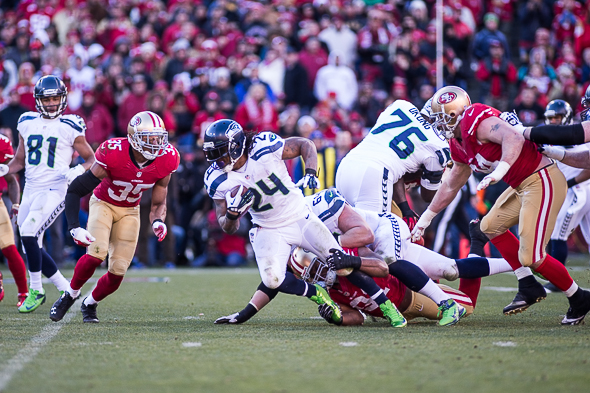 The Seahawks entered the fourth quarter with a 17-3 lead and the ball Thursday night at Levi’s Stadium and — for a change — didn’t blow it, coming away with a 20-3 victory over the San Francisco 49ers that kept their playoff hopes from circling the drain (box). Russell Wilson tossed a dazzling 43-yard touchdown to rookie WR Tyler Lockett, RB Marshawn Lynch pounded for 122 yards and Seattle’s defense utterly overwhelmed QB Colin Kaepernick in a decisive victory.

The Seahawks improved to 3-4, moved into third place in the NFC West and have 10 days to prepare for the Dallas Cowboys.

After Steven Hauschka provided the Seahawks with a 20-3 lead with a 46-yard field goal at 9:23 of the fourth quarter, the Seahawks stuffed the 49ers’ offense on three consecutive drives, all 3-and-outs. In contrast to the past two weeks with last-quarter gags against Cincinnati and Carolina, Seattle sustained its next drive by having Lynch convert a 3rd-and-5 with two minutes to play to squash any chance of a San Francisco comeback.

Wilson completed 18 of 24 for 235 yards, but threw two interceptions, one a reckless downfield shot that blunted a scoring opportunity. He finished with an a subpar 84.5  passer rating and was sacked five times, jacking his season total to 31. Wilson is on pace to get sacked 71 times, which would rank among the top five totals in NFL history.

Lockett caught five passes for a team-leading 79 yards. His 43-yard TD catch was the play of the game. He is the first rookie since Randall Cobb of Green Bay in 2011 to score touchdowns on a kickoff return, punt and and a reception.

The Seahawks sacked Kaepernick six times, including 3.5 by DE Michael Bennett and 1.5 by DE Cliiff Avril. Kaepernick did not record a single rushing yard and threw for only 124 yards. For the majority of the game, his receivers were smothered and he labored under constant pressure.

CB Richard Sherman had his best game of the year. Assigned almost exclusively to WR Torrey Smith, San Francisco’s major deep threat, Sherman made him invisible, holding him to no catches.

The Seahawks forced the 49ers into six 3-and-outs and held them to 1-for-11 on third downs.

Burned by tight ends all season, the Seahawks held Vernon Davis and Garrett Celek to five catches for 63 yards.

“Not many people can say they scored on a punt return, a kick return and a pass in the same season. Russell threw a perfect ball and I was able to run under it” — Lockett on his 43-yard scoring pass.

“The defense really executed tonight and we did what we needed to do on offense” — Wilson.

The 90-yard drive that culminated in Wilson’s TD to Lockett in the second quarter tied Seattle’s longest march of the season (also 90 vs. Carolina Sunday) . . . Hauschka is 16-for-16 on field goal attempts . . . The Seahawks are 15-2 in prime-time games under Carroll . . . Seattle has won five of its last six regular-season games against San Francisco and leads the all-time series 18-15 . . . Carroll is 6-5 against the Niners since 2010 . . . Lynch’s first-quarter rushing TD was the 56th of his Seattle career and moved him into second place on the franchise’s all-time list behind Shaun Alexander, who had 100 . . . This marked the first time since Week 3 of the 2009 season that Seattle and San Francisco (2-5) entered the game with sub.-500 records.

The Seahawks travel to Dallas to face the Cowboys Nov. 1 at 1:25 p.m. (FOX). The Seahawks have a bye week before returning to CenturyLink Field Nov. 15 to face the Arizona Cardinals.