Scott Servais, who has no previous managerial experience but a long history with GM Jerry Dipoto, replaces Lloyd McClendon and becomes the 17th full-time Mariners manager. 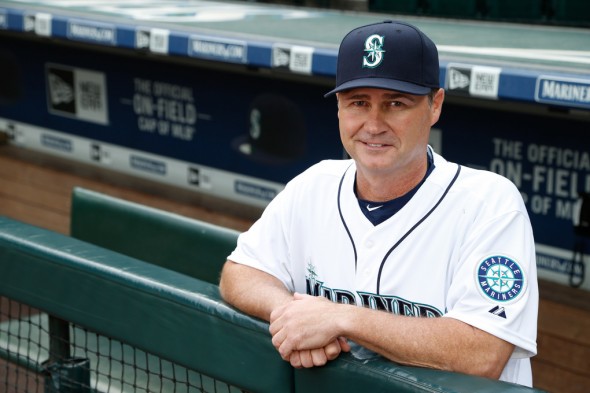 The Mariners Friday hired Scott Servais as their new manager, replacing Lloyd McClendon. A former major league catcher with no previous managerial experience, Servais has an extensive background with Seattle GM Jerry Dipoto, having worked under Dipoto as an assistant GM with the Los Angeles Angels.

“Through the course of the 20-plus years I’ve known Scott, I’ve come to see him as one of the most complete, well-balanced and inclusive baseball people in the industry,” Dipoto said in a club release. “I’ve been fortunate enough to call him a teammate as a player, while also having worked closely with him as an organizational leader in both Colorado and Los Angeles.

“He is a communicator with strong baseball acumen and leadership skills. I truly believe his strong character and career experiences as a player, coach and executive have prepared him for this opportunity.”

According to The Los Angeles Times, Dipoto’s first hire after he became Angels GM  in October 2011 was Servais.

In addition to working for the Angels, Servais spent time as the player development director for the Texas Rangers (2006-11). The 48-year-old Servais also spent two years as the roving catching instructor for the Chicago Cubs.

“I am excited and grateful for the opportunity to manage the Seattle Mariners,” Servais said in the club’s release. “It has long been my goal to manage a big league team and while I took a slightly different path than many, I am confident in my ability to lead.

“We have a terrific core of players and I’m looking forward to bringing in a coaching staff that will help me establish a winning culture here as we work toward putting a championship-caliber team on the field for the fans of the Northwest.”

Dipoto and Servais were Colorado Rockies teammates during the 2000 season. The Angels interviewed Servais as a potential replacement for Dipoto, but ultimately hired Billy Eppler from the New York Yankees for the job.

A native of Coon Valley, WI., Servais played at  Creighton University. He was selected in the third round of the 1988 amateur draft by the Houston Astros.

Scott and his wife Jill have three children: Tyler recently graduated from Princeton University and was drafted by the Detroit Tigers; Jacqueline is enrolled at UNC Charlotte, where she played volleyball and is currently interning with the NFL Carolina Panthers; and Victoria attends Ole Miss University.

Tim Bogar, who had been under consideration for the manager’s job, will apparently follow Servais to Seattle to serve as his bench coach.

Bogar, 49, managed the Angels’ AA team at Arkansas in 2013 before moving to the Rangers to become their bench coach in 2014. He became Texas’ interim manager after Ron Washington resigned and guided the Rangers to a 14-8 record in September 2014.