Sounders to host nemesis Galaxy in first round

A 3-1 win over Real Salt Lake Sunday sent the Sounders into the Western playoffs as the fourth seed, drawing Wednesday the fifth-seeded Galaxy, against whom they are winless this season. 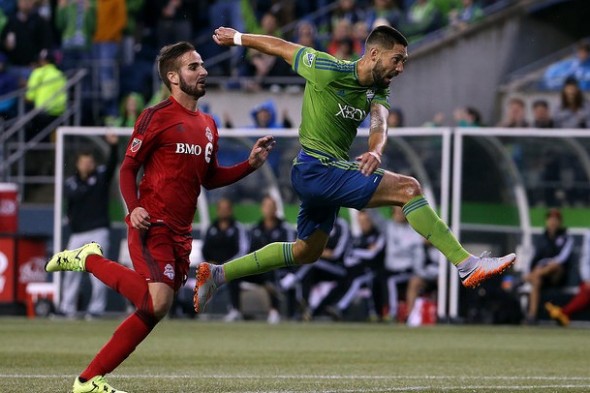 Clint Dempsey was his old self, scoring two goals and assisting on a third as Seattle beat RSL to set up a home first-round playoff match against the LA Galaxy. / Corky Trewin, Seattle Sounders FC

On a rainy Sunday evening at the Clink, the Seattle Sounders punched their ticket to the postseason with a 3-1 win over Real Salt Lake. Wins by Portland, Vancouver and Sporting Kansas City meant that Seattle finished fourth in a tight Western Conference, and will host the fifth-place LA Galaxy Wednesday at 7 p.m.

LA is Seattle’s playoff white whale. They have ended the Sounders’ postseason three times, including a 2-2 aggregate elimination in 2014 with a road-goals tiebreaker. The Sounders are 2-4 against the Galaxy in post-season play, and have a 4-8-6 regular season record all-time.

Seattle is winless against the Galaxy this season, dropping two contests at the StubHub Center by scores of 1-0 and 3-1, before managing a late 1-1 draw in the dying minutes of a  home match Oct 4.

Chad Barrett, the only Sounder who scored against the Galaxy this season, knows what it takes to convert against LA.

“(It takes) a chip on the shoulder, and I guarantee we all have it,” said Barrett. “We won the Supporters’ Shield and the Open Cup last year, and we just need to win the MLS Cup and have all three (trophies) here. That’s personally enough drive for me — it’s the one thing we haven’t got here.”

The drive was evident right away Sunday. Five minutes in, Obafemi Martins connected with Clint Dempsey to make it 1-0. Five minutes later, Marco Pappa swung in his second goal of the season from beyond the 18, and Dempsey made it 3-0 by cleaning up a blocked Martins shot into an open net at the 20-minute mark.

“(The early lead) was certainly good for my constitution,” joked coach Sigi Schmid. “Jumping on them early definitely helped because it established a good rhythm, it established our dominance.”

Dominance will be important to carry into the postseason for the Sounders, who staggered dramatically in the summer. Now, they have something approaching consistency as the regular season concluded. Seattle is 4-0-4 in league play since Aug. 30, and outscored opponents 14-7.

Captain Brad Evans said the squad was already planning for the midweek challenge in the locker room after the match.

“Guys are talking about it already, as soon as we found out that we had the home game,” said Evans. “We know that they’ll be hungry coming off their last game, so expect to be an all-out, balls-to-the-wall performance. It’s going to be a fun one.”

Seattle will have to be at its sharpest to repel the Galaxy, whose attacking trio of Gyasi Zardes, Robbie Keane and Giovanni dos Santos have run defenses ragged this season, scoring a combined 28 goals.

Evans said that disarming the Galaxy was crucial to any hopes of a postseason victory.

“We’ve got to shut down their attacking,” said Evans. “They’re so good, they’ve got so many goals scored this year, it’s ridiculous. We’ve got to take advantage of being at home, come out today like we did and press the issue. We’ve got to turn defenses around and make them feel the pressure.”

The home field advantage will be crucial. The fact that the match is in the knockout round may also play to Seattle’s advantage, since they won’t have to play a return fixture in California, where they have failed to beat the Galaxy since 2009.

Seattle crowds are certainly notable for their size. The 55,435 in attendance Sunday meant that Seattle broke the MLS record for average attendance at home matches the club set in 2013.

Schmid had praise for the fans, citing the record as proof of Seattle’s dedication to the club.

The trenches will come in handy Wednesday.

The trio of goals was the first by the club in the opening 20 minutes of a match . . . Dempsey’s brace was the third in the club’s history in the same span.