Every box on Mariners GM Jerry Dipoto’s list for what he wanted in a manager was checked after the interview with Scott Servais, who is eager to join the plan to “understand how to conquer the mind.” 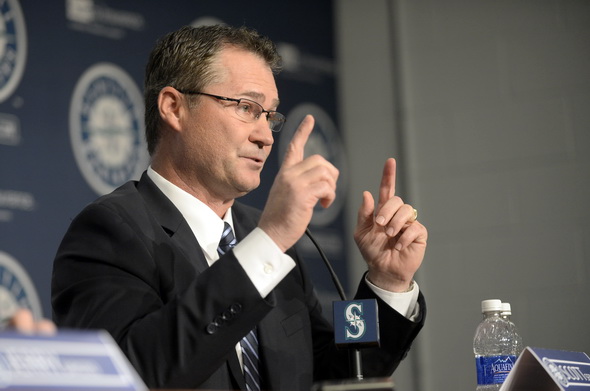 In his introduction of new manager Scott Servais Monday at Safeco Field, general manager Jerry Dipoto said the hire marked a “new beginning.” Aside from redundancy, in that all beginnings are new, why is it that the Mariners always seem to be at the start? Doesn’t Seattle get credit for time served, as with any well-behaved prisoner?

Perhaps the answer is after 38 years, four playoff appearances and no World Series, starting over is mandatory. There isn’t a lot worth saving.

In Dipoto, Servais and director of player development Andy McKay, the Mariners have hired baseball bosses who represent a massive cultural makeover: They understand how to get the best out of each player by listening, and by connecting them to each other and the organization.

If you think that is Straight Outta Carroll, listen to this:

“I look at myself as a football coach in a baseball uniform,” Servais said. He confirmed that the expressions from the assembled media he received must have been similar to those in his Mariners interview.

“That’s where it happens — the strike zone.”

The analogy is strikingly apt, particularly at this moment. The two-time NFC champion Seahawks are 3-4 largely because they made so little investment in their offensive line. The line may improve, but the early games can’t be un-lost.

The analogy was no surprise to Dipoto.

“We talk about the line of scrimmage and the baseball strike zone frequently,” he said, mentioning that when he was interim GM of the Diamondbacks, his manager was Kirk Gibson, who played some football at Michigan State. “It’s one of the things we impart to our minor leaguers: Control the line of scrimmage.

“It’s fun; it gives them something to focus on other than the mundane. Find a way to make it more interesting. I think what he means is that he’s detailed, disciplined and organized. One thing I can say about Scott, more than anyone else I know, is he loves to practice. That is more clearly associated with football.”

It’s one aspect of the big emphasis Dipoto puts on player development: Help make the talent on hand reach potential. It’s easier and cheaper than spending $240 million on top-shelf veterans such as Robinson Cano, whose expiration date is closer.

The current paradigm in MLB is the Kansas City Royals, who have grown a number of players from their farm system, and supplemented the lineup with vets via trade or free agency. It worked well enough to make them two-time American League champions.

In contrast, the Mariners, despite similar high draft choices from playing as poorly as the Royals over the past decade, have precious few championship-class farm players — at least until they are traded away.

“Player development is your lifeblood,” Dipoto said. “That’s where it begins. You scout, you draft, you develop, you acquire players. (The organizations) needs to be invested in their continual development. It’s never more present than at the lower levels, but it shouldn’t end (when players reach) at the big leagues.”

It’s probably the biggest reason Dipoto chose Servais over five other semifinalists, which included former Red Sox star (and Mariners farmhand) Jason Varitek. Dipoto admitted without hesitation that a long personal relationship with Servais helped, but his assets were more tangible. Servais has been a scout internationally and domestically, directed a draft, was a catching coordinator, and has spent the past 10 years in the AL West with the Rangers and Angels.

“He’s also what I believe to be one of the most well-respected player development leaders in the industry,” he said. The emphasis on player development is what the Seahawks have mastered by coaching up undrafted free agents into contributors.

Different sports, but the same performance principles apply. It’s why he hired McKay, a sports psychologist who had been the peak-performance coordinator of the Rockies.

“It’s where the game goes next,” he said. “Baseball has tackled so many different frontiers. Even today, 20 years after analytics have been a critical part of the game, we talk about it like it’s a new frontier: ‘We can’t possibly cross over that.’

“There are 30 organizations in tune with the analytics of the game, that are smart in how they carve up the numbers. Some do it better than others.What Andy brings us is what I think is the next frontier — understanding how to conquer the mind.”

As excited as he was over the hire of Servais, Dipoto was jacked about McKay.

“He understands how to dial a player up, to get him over his own fears and the nuances of playing every day,” Dipoto said. “He’ll find out how players are wired, how they tick, and give them the best opportunity to connect their minds with what their bodies do.”

“Of all the hires I’ve made, I’m so excited to see what Andy can bring to the table.”

For a team that was last in MLB in hitting with runners in scoring position, the idea of dialing up players to do what Seahawks QB Russell Wilson always says — “stay in the moment” — would rank among the great turnaround feats in Seattle sports.

For the moment, it’s all talk. But good words delivered well to talented players is also a big part of Dipoto’s solution. And they don’t cost $240 million and get hernias.