Sounders confident of chances against Galaxy

Wednesday’s playoff game is a quick turnaround for the Sounders, but worse for the Galaxy, which had to fly home from Kansas City before flying to Seattle. But Ozzie Alonso’s health is questionable. 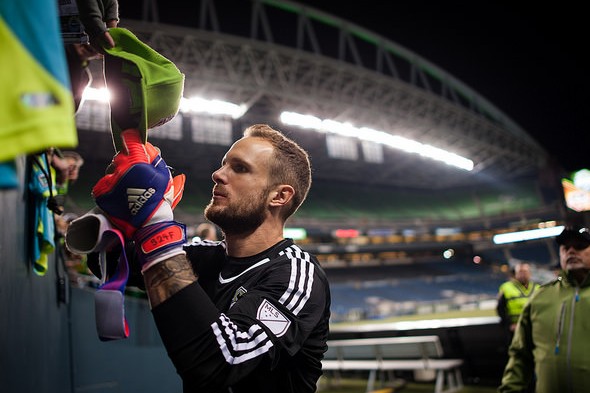 GK Stefan Frei has been rock solid in net for the Sounders, and was confident of his team’s chances against the Galaxy. / Jane Gershovich, Seattle Sounders FC

Less than 24 hours after a 3-1 win against Real Salt Lake secured their berth, the Seattle Sounders had a short day of practice ahead of Wednesday’s knockout-round playoff match against the Los Angeles Galaxy at 7 p.m. Wednesday. Most players who played Sunday were sent inside early, and an air of hurried, albeit composed, preparation pervaded training.

“It’s nice that we don’t have to travel,”  Sounders coach Sigi Schmid said Monday. “It’s just the turnaround is tight.”

Tight indeed. Seattle will retake the pitch 63 hours after they started their previous match. LA will do the same, but with the added work of returning from Kansas City, then heading to Seattle. That’s not much time for either team to breathe ahead of a Western Conference grudge match.

Keeper Stefan Frei said that the task of mental preparation in such a short span wasn’t a concern.

“It’s nothing new,” said Frei. “We’ve done it before, we have midweek games during the season and also sometimes the (Champions League). So it’s a plus that we don’t have to travel, and it’s an extra plus that we have our fans behind us.

“Just treat it like any other game. You don’t want to put too much pressure on yourself, because then you’re going to psych yourself out.”

Frei said he handles the pressure in a variety of ways, such as with cooking, drawing or video games. His mental toughness speaks volumes, but it goes hand-in-hand with his role as a keeper, the man who must remain clear-headed above all others. Other Sounders could be forgiven for remembering that Los Angeles has ended three of Seattle’s six playoff campaigns in the MLS era.

If memories of those matches haunt Schmid, he gave no evidence.

“We’ve done well at home (against the Galaxy),” said Schmid. “Last year we won at home against them . . . so we’re confident of our ability to play at home against them. It’s just a matter of us playing well and putting in the effort that we did in the first 30 minutes (against RSL) and letting the chips fall where they may.”

Psyched out or not, Frei admitted that stopping the Galaxy’s formidable attack would take 11 men.

“I think defending is a whole-team effort,” said Frei. “Sometimes people think it’s the back five and that’s it, but it goes from the striker. The striker is the first defender.”

“I’m very happy with the guys that I have in front of me. I couldn’t ask for a better back four to protect me.”

Frei probably wouldn’t be upset if Román Torres, who recently underwent a successful surgery to repair his torn ACL, was still healthy. Still, the 29-year-old goalie pointed out that Seattle has surrendered the fewest goals in the league (36, in a tie with Vancouver) this season and has 11 shutouts.

The question is whether that defense can stop the Galaxy, a team that has scored 56 goals. Half of that number can be attributed to three stars: Robbie Keane, Giovanni dos Santos and Gyasi Zardes.

A big part of the answer to will involve the ability of midfielder Osvaldo Alonso to participate. Alonso limped off against RSL in the second half, and did not practice Monday. Schmid didn’t seem worried, but played his cards close pending a full evaluation Monday afternoon.

While Seattle’s defense will have to be unyielding, its attack will need to continue to press.

“We’ve got to come out and play the same way we did against Salt Lake at the beginning of the game,” said Schmid.

If Seattle can manage three goals in the opening 20 against the Galaxy, Sounders fans will have plenty to celebrate come Wednesday night. If they can’t, the game will likely become a high voltage back-and-forth affair. Either way, the pieces are all there for another memorable postseason clash between two of the league’s most visible franchises.

Asked about the bearing of past meetings and LA’s two-game losing streak to end the season, Schmid chose to live in the moment.

“It’s a do-or-die game, anything can happen,” said Schmid. “You can throw the other games out the window.”