Three times in six years, the Galaxy had ousted the Sounders from the playoffs. Not this time, as Seattle seized Los Angeles’s defensive misplays to lift a burden. 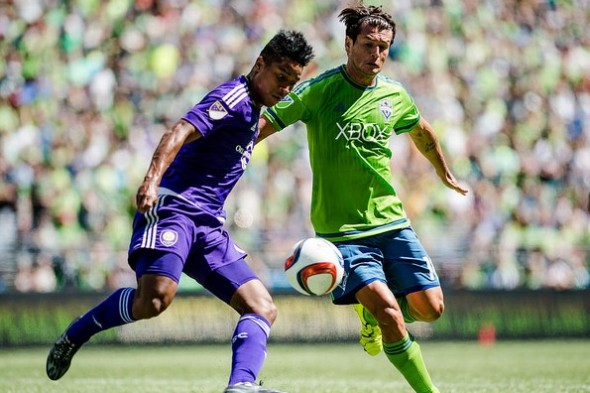 Getting bounced from the playoffs by LA is a Sounders tradition, but don’t tell that to recent transfer Nelson Valdez, who scored his second goal since his arrival in the win. / Jane Gershovich, Seattle Sounders FC file

In the sporting realm of do-or-die, this has been where the Sounders end up dead at the feet of the Los Angeles Galaxy. Seven seasons is a short time to build tradition, but losing to the MLS’s glam team in the postseason was Seattle’s tradition. The Sounders Charlie Browned every attempt at LA Lucy’s hold.

Wednesday night at the Clink changed things. In a wildly entertaining clash of mistakes seized upon, the Sounders started a new tradition.

“I think (players) knew this was a team we had to get off our backs,” said coach Sigi Schmid, who is never one to play up rivalry or history but couldn’t talk his way around this one. “We talked the last couple of games about putting our soul into every game from here on out. I think they did that.”

Be it soul, skill or luck, the 3-2 win pushed the Sounders into the Western Conference home-and-home semifinal series Sunday at the Clink against either No. 2-seeded Vancouver or No. 1-seeded Dallas, depending on the outcome of Thursday night’s knockout game between Portland and Sporting Kansas City.

To hear the Galaxy’s Bruce Arena tell it, the outcome Wednesday was more about the defending MLS chsmpions losing than Seattle winning.

“I think Christmas came early in Seattle,” said the ever-cantankerous coach. “We absolutely gift wrapped that game for them tonight.”

Arena is never one to concede an edge, even in defeat, especially against Seattle. Frankly, he was mostly right. The Galaxy’s back line staggered about as though they had spent the pre-game drinking at Fado, the Irish pub on First Avenue.

“Our play in front of our goal defensively was atrocious,” Arena said, fuming. “We just gift-wrapped those three goals. Give them credit – they jumped on the mistakes, but we were shockingly poor.”

They were probably tired too, having played, and lost, in Kansas City Sunday before returning home and then flying to Seattle Tuesday. But no one wants to hear whining from LA teams. Especially since the Sounders played without two injured starters, Marco Pappa and Ozzie Alonso.

Being at home in front of 39,537 — though it was the Sounders’ second-smallest MLS crowd of the season, likely owing to the midweek and short notice — loomed large, accrued from a tiebreaker advantage that put Seattle at No. 4 in the West, one ahead of LA. They had beaten LA at the Clink in the previous two postseason meetings, but lost each series on road goals in the home-and-home series.

This was a one-and-done. After beating Real Salt Lake Sunday 3-1 to end the regular season, the Sounders felt some swagger return after summer doldrums that saw them win only once in a 10-game stretch.

“All I know is the last two playoff games against them here at home, we beat them,” said Schmid, whose team was 12-4-1 at home this season. “We started something Sunday. We wanted to continue it today. We want to carry this into Sunday.”

And it was just as well that the Galaxy was first up in the playoffs.

“All week, we said if you want to go all the way, you have to beat tough opponents,” said GK Stefan Frei, who was near-heroic in the net. “It was good that we faced them early because it helps your confidence. It was a bit of a monkey that sat on our back, but now he’s off our back, it’s great.”

After a spectacular burst of two goals each in the first 22 minutes, the teams cut the mistakes and settled into a tense face-off. The first half went to the Galaxy in terms of shots and possession, but the Sounders picked up in the second half.

In the 73rd minute, Erik Friberg, the low-key Swede who rarely is in position to strike, found himelf atop the box when the Galaxy failed on a clearance. He volleyed a long bounce with his left foot swiftly past GK Donovan Ricketts, who couldn’t even make a move before the ball whistled under the crossbar.

Delirium swept the joint, but the final 20 minutes seemed to drag because the Galaxy always seemed to find a way with stars such as Robbie Keane, Gyasi Zardes and newcomers Giovani dos Santos and Steven Gerrard.

As the Galaxy’s furious late rally closed out empty, the old tradition ended and the opportunity arrived for a new one. Naturally, Schmid was cautious.

“We gotta understand that his is the beginning of our journey, not the end,” he said. “We can’t relax. We have do the the things we’ve done well the last two games.”

Coaches always poor-mouth high expectations. But there’s no denying that the Sounders weren’t sure of a playoff berth until Sunday. Now, with one win over the Galaxy, the possibilities seem limitless.