After a four-goal burst in the first 22 minutes, the Sounders and Galaxy settled into a tense struggle until Erik Friberg nailed his first MLS goal of the season to end the LA’s playoff dominance of Seattle. 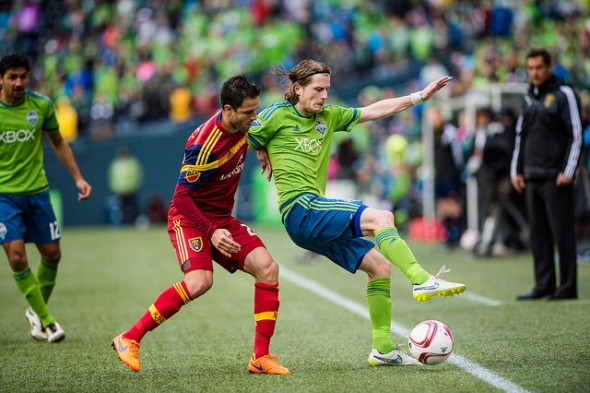 Midfielder Erik Friberg was the hero Wednesday, knocking in the game-winner as Seattle fought its way past LA for the first time in the playoffs. / Jane Gershovich, Seattle Sounders FC

It was a topsy-turvy night at the Clink Wednesday. The Sounders vanquished the ghost of playoffs past, gutting out a 3-2 victory over the Los Angeles Galaxy, thanks to an Erik Friberg game-winner in the 73rd minute to advance to the Western Conference semifinals (video highlights). It was Friberg’s first MLS goal this season and his third all-time as a Sounder.

“We haven’t done anything easy all year, so there was no reason for you guys to suspect that tonight would be easy,” said coach Sigi Schmid. “A lot of guys sacrificed tonight . . . and I think that showed the character of the team so I’m very, very proud of those guys.”

Schmid has reason to be proud. Seattle never survived the Galaxy in the postseason, and had not won against them all season. It was a battle,  one that lacked refinement at times.  But the Sounders just needed to outlast LA, not outclass them.

Seattle continued its recent string of early scores, snagging the lead five minutes in. An Andreas Ivanschitz long ball curled into the penalty area, where a defensive miscommunication occurred between Omar Gonzalez and keeper Donovan Ricketts, who spilled the ball straight to Clint Dempsey, who drove the ball into an open net.

Los Angeles showed that they wouldn’t be put away easily, answering within 60 seconds. Giovanni dos Santos played a ball to Gyasi Zardes, who turned the ball inside the 18, where Sebastian Lletget finished into the right side of the net, draining the stadium of the cheers from Dempsey’s strike from the 39,537 in attendance.

Seattle fought back and reclaimed the lead In the 12th minute. Ivanschitz swung in a free kick over the Galaxy back line to find Nelson Valdez, who appeared on replays to have been offside as he passed by Steven Gerrard. Valdez slid for the ball, tipping it in with his foot to retake the 2-1 lead.

Los Angeles was undeterred. In the 22nd minute, Juninho found Zardes with a flat pass atop the 18, and Zardes’ shot deflected off Valdez’s stomach past the fingertips of keeper Stefan Frei to even the score.

From there, the second half settled into a battle of nerves. Both teams played the high-octane, fast-paced soccer for which they are known, with defenders carefully guarding the myriad weapons present. Seattle lost left back Leo Gonzalez to injury in the 35th minute, with Brad Evans volunteering to move to his spot in the back line as Zach Scott entered for Gonzalez.

“I just went to the sideline and told (Schmid) to put Zach at center back, and I’d move to left back,” said Evans. “Zach has done wonders against LA in the past, so it was a question of, ‘Where do I fit in the team?’”

The move worked out well. Scott, who has soldiered on through a laundry list of ailments, notably including a broken bone in his foot, held firm and physically moshed the middle portion of the defensive third. Evans’ speed enabled him to up the pressure on the Galaxy’s wingers, as well as spark attacking runs as he carried the ball through midfield.

Returning from halftime, forward Clint Dempsey and Valdez, who had played on the left wing, switched positions. Schmid said that apart from that switch, a tighter defensive formation was the major shift after the first half.

This too, proved an effective adjustment. LA had 11 shots in the first half, but was limited to just four in the second. Seattle’s attack also became more stable, with fewer long balls and more buildup through the middle portion of the field.

Friberg’s goal began with a Tyrone Mears cross from the right. As the ball sailed in, it was headed high up by Los Angeles’ back line. Ricketts came out for an attempted clearance, but slipped as he did so. Ricketts regained his feet, but not in time to stop Friberg’s left footed, looping volley that sailed into the net.

“That was strange — I said, ‘When was the last time you scored a goal like that?’” said Schmid. “He laughed and went, ‘I don’t think I’ve ever scored one like that.’”

Friberg, Valdez, and Ivanschitz were all brought in as transfers during the summer. They collectively finished with two goals and an assist, a spectacular outing for a group that seems to have finally found its form after a rough period of adjustment.

Seattle saw out the match through its dedication to stout defense, and asking for a few more highlight reel saves from Stefan Frei, whose acrobatics wouldn’t have been out of place at Cirque de Soleil. Frei was happy with his team’s defensive performance.

“Despite the two goals we played defense as well as we have all season,” said the keeper.

The Sounders, who scored the most goals in their MLS playoff history, are the right temperature at the right time. They’re unbeaten in their last nine contests, and despite health concerns, showed Wednesday night that they are ready to shake their tradition of postseason disappointment.

With the win, Seattle hosts the first leg of the Western Conference semifinals Sunday. The start time is unknown, as is the opponent, pending the outcome of Thursday’s Portland-Sporting KC knockout-round match. If Portland wins, Seattle will face FC Dallas, the number one seed in the West. If SKC wins, the second-seeded Vancouver Whitecaps will come to town for their sixth match of the season against the Sounders.