Next up for Sounders, FC Dallas Sunday at 6:30 p.m. at the Clink in the first of a home-and-home series in the West semifinals. Sounders went 1-0-1 vs. Dallas in the regular season. 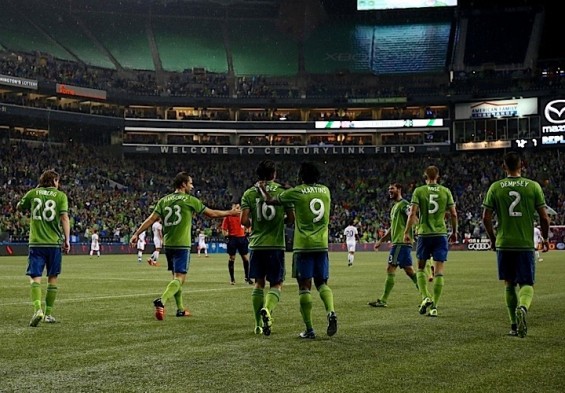 The Sounders move on from the knockout-round win over the Galaxy to Dallas in the West semifinals. / SoundersFC.com

It took 120 minutes and 11 rounds of penalty kicks Thursday night in Portland, but the seeding for the MLS Western Conference semifinals has been determined after the  Timbers drew 2-2 with Sporting Kansas City before advancing on penalties, 7-6. The third-seeded Timbers will face second-seeded Cascadia rival Vancouver while the No. 4 Seattle Sounders host No. 1 FC Dallas. Kickoff in Seattle is 6:30 p.m. Sunday.

Sporting Kansas City nabbed a late equalizer in the 87th minute from Kevin Ellis before grabbing a lead early in the 96th minute of extra time from Krisztian Nemeth. Just as time looked to be running out on the Timbers’ season,  Maximiliano Urruti found the net to tie at 2 and send it to penalties.

What followed was high drama at Providence Park. GK Jon Kempin, 22, who entered as a substitute for an injured starter Tim Melia, made three saves, but was let down by errant shooting from his teammates.

Most notably, a gut-wrenching miss from SKC’s Saad Abdul-Salaam struck both posts before rolling away from the net. When it was time for the keepers to take their turn, Portland keeper Adam Kwarasey scored his spot kick before stopping Kempin’s effort.

All three Cascadia clubs have survived, a first in their time in MLS. Portland will host the first game of a two-legged playoff  at Providence Park, before traveling to BC Place for the return fixture Nov. 8.

Cascadia Cup winner Seattle will face FC Dallas, which has not scored on Seattle this season. The teams played to a 0-0 draw at Toyota Stadium March 28 before a 3-0 Sounders victory at the Clink June 13, just days before the disastrous Open Cup loss to Portland that derailed Seattle’s summer.

The teams also met a year ago in the Western Conference semifinals, with the Sounders advancing on away goals following a 1-1 draw at Toyota Stadium and scoreless draw at the Clink.