After being eliminated from the playoffs on road goals in 2014, Schmid hopes to leave no doubt for his side against FC Dallas by securing advancement through a home win and a draw on the road. 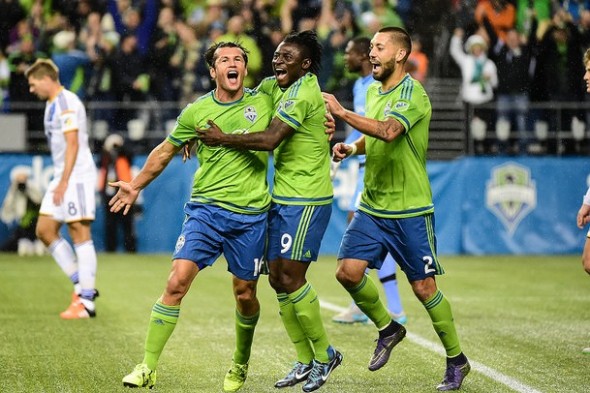 Speaking at practice Friday ahead of the Seattle Sounders’  two-legged Western Conference semifinal against FC Dallas, coach Sigi Schmid outlined his formula for ensuring his squad’s advancement to the conference finals. In his mind, the Sounders will win Sunday’s 6:30 p.m. match at CenturyLink Field and draw Nov. 8 in the away match.

“Ideally we want to win at home and tie away, basically that puts us through,” said Schmid. “You generally don’t want to take goals at home, you want to be good about that part of it.”

The pressure to avoid conceding goals at home is immense in the playoffs, where the number of road goals scored is used as the tiebreaker for the aggregate score across two matches.

It is a lesson that Dallas and Seattle know all too well. Seattle drew both matches against Dallas in a Western semifinal in 2014, by scores of 0-0 at home and 1-1 on the road, before advancing on the merit of their lone road goal.

As they lived by the away goals rule, the Sounders died by it as well. They lost 2014’s Western Conference final to the LA Galaxy after losing 1-0 at the StubHub Center and winning 2-1 at home, eliminated on a 2-2 aggregate score due to the Galaxy’s road goal.

Seattle last kept a clean sheet against Vancouver in the Champions League in a 3-0 victory Sept. 23, but has strong defensive mooring to pin their plans to shut down Dallas. The Sounders conceded a league-lowest 36 goals during the regular season, and had 11 shutouts in their 34 matches.

The trick for Seattle, according to Schmid, is how to balance that commitment to shutdown defense while maintaining the attacking style of soccer that has seen them score six goals in the past two matches.

The problem is made worse by the fact that Dallas’ offense revolves around counteroffensives after turnovers.

“They’re a team that likes to play on the counterattack. They’ve got very fast wingers,” said Schmid. “They like their set pieces, because they still have some big bodies there with (Matt) Hedges and (David) Texeira or Blas Peres.

“They’re a team that doesn’t mind having 35 percent of the possession and getting you on the counter.”

Fabian Castillo paces FC Dallas in scoring. The forward has converted nine times this season. The fact that Castillo hasn’t scored a league goal since August is far from concerning for Dallas fans; the team has seven players with three or more goals this season. Mauro Diaz has a team-high 10 assists, a tally he shares with Seattle’s Clint Dempsey.

As in Wednesday’s 3-2 match against the Galaxy, there will be little room for error, compounded by the fact that Osvaldo Alonso is likely to miss his second match with what Schmid characterized as a groin injury.

“We’re holding out hope, but obviously the progress is going a little bit slower than we expected,” said Schmid Saturday when asked if Alonso was healthy enough to play.

Question marks also hover around Brad Evans, who exited Wednesday’s contest with a hamstring issue and regarding whom the team has been tight-lipped. If Seattle’s backline is missing its captain, expect to see fewer forward runs from right back Tyrone Mears, as his speed will be needed to help cover space left open by the physical presences of Zach Scott and Chad Marshall at center back.

Finally, if Leo Gonzalez is unable to play after his own departure from the Galaxy match with an injury, Oniel Fisher is the heir apparent to the left back slot. The 23-year-old Jamaican acquitted himself well during a period when Seattle’s season derailed, and Schmid was confident of his ability to perform under pressure.

“When you’re dropping in just one guy with a bunch of veterans, (inexperience) isn’t an issue. We’re confident with what Fisher can bring,” said Schmid. “At this point in the season, the rookies have played the whole year, they’re not rookies anymore.”

Fisher and the Sounders will look to set the tone with a big win Sunday, but Schmid admitted that he expected tough opposition from the number one seed in the West.

“(Dallas coach Oscar Pareja) has done a great job with that group,” said Schmid. “It’s going to be a good series.”