With seven touchdowns in 14 possessions, the Huskies finally pulled together an offense that was worthy of their defense in a 49-3 rout of Arizona Saturday night at Husky Stadium. 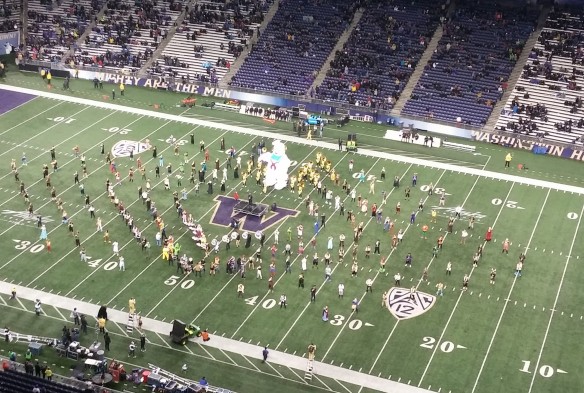 The highlight of the Halloween portion of the evening was the Washington marching band’s medley of songs about spookiness, including appearances by “Ghostbusters” Mr. Stay-Puft and the film’s hit song sung by its originator, Ray Parker Jr. / Art Thiel, Sportspress Northwest

The week began with Arizona coach Rich Rodriguez firing off a letter of complaint to the Pac-12 Conference office about the 8 p.m. start to the game at Washington on Halloween night. For all the good it did him, he may as well have gone trick-or-treating in North Korea.

But Rodriguez had a more meaningful protest in mind. Apparently he didn’t allow his team to show up at Husky Stadium.

How else to explain how the Wildcats, the most productive offense in the conference, averaging 41 points and 505 yards, were beaten 49-3? Zombie-cats?

There is a possible alternative answer: For the first time this season, the Huskies got their stuff together.

Coach Chris Petersen alluded to the notion, describing how he addressed the team after the blowout:

Coming into the game 3-4 with a lone big win over a USC team in shambles during what was Steve Sarkisian’s final game as Trojans coach, the Huskies sputtered and stammered in their search for the right lyrics all season. Finally, they worked their way through the whole song.

“We’ve been waiting for this,” Petersen said. “Offense, defense, special teams. They really felt the urgency to get something done. In a hurry.”

The USC win was followed by desultory losses to Oregon and Stanford, good teams but not necessarily foregone winners. If the Huskies screwed up the Arizona game, the modest treat of a bottom-tier bowl game would have involved some serious uphill.

Not only didn’t they screw up, they drilled down deep into the Wildcats (5-4), who after a first-possession field goal, were never a threat to score, nor much of a threat to stop Washington.

It was hard to choose whether the offense or defense exceeded its peak performances this season. The shattering of Arizona was definitive on both sides.

Might have to give the edge to the defense, because the Wildcats entered the game having given up one interception all season. The Huskies had three picks by halftime. Led by LB Travis Feeney’s 11 tackles and two sacks, they held Arizona to 330 yards and an average of 3.8 yards per play, and recovered a fumble to go along with the INTs.

Then again, the Huskies offense averaged 7.7 yards a play, made no turnovers and even scored a touchdown in the first quarter. They had only 10 points this season in the opening period. They scored seven touchdowns in 14 possessions.

Jake Browning, the freshman QB who sat out the Stanford loss with a sore shoulder, returned with a stout performance that included a personal-record four touchdowns in a 16-for-24 passing performance for 263 yards. He ran five times for 20 yards, including a 13-yard option keeper around left end for a rushing TD.

It was the first drive, an 80-yard, six-play beauty, ending with a 13-yard TD pass to RB Dwayne Washington, that set the evening’s course.

“That made everybody feel better,” Petersen said. “(Earlier in the season) the kids were pressing, stumbling over themselves sometimes. They could breathe a little bit easier.”

Browning’s explanation was simple: “We came out with a lot of energy.”

The near-flawless efficiency couldn’t have offered a greater contrast to the game in Tucson a year ago. The then-17th-ranked Wildcats won 27-26 after a cascading series of playing and coaching mistakes by UW finished when RB Deontae Cooper fumbled the ball over as the Huskies were attempting to kill the clock. That left Arizona with a short field to score the winning touchdown in the final minute.

But in the eighth game of the 2015 season, Washington’s freshman- and sophomore-loaded roster finally grew into the Pac-12 game. There’s no guarantee it will last into Saturday’s home game against 7-1 Utah, which beat Oregon State 27-12 Saturday. But at least they know how a dominant game looks and feels.

It was a shame so few saw it. The latest start in Husky Stadium history, plus a threat of bad weather that didn’t materialize, helped put off many. The Huskies announced 56,749 tickets were sold, but at least 25,000 of them were wearing Halloween costumes that looked like aluminum bleachers.

Petersen nevertheless thanked profusely those who did show. But it’s performances like Saturday, not gratitude, that will bring back the masses. Petersen knows.

“It’s interesting — it’s really hard to predict (performance) sometimes,” he said. “I go into most games thinking we’re going to move the ball. I’ve been expecting a complete game for awhile. We just haven’t clicked the last few weeks. And so to have a complete game, we now know we have it in us.”

At this rate, Petersen will begin to campaign for 8 p.m. starts. Maybe just to piss off Rodriguez.