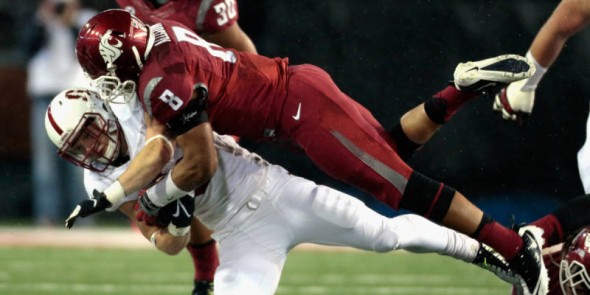 PULLMAN – A rainy Saturday started off suitably gloomy for Washington State football fans when a Temple fan held up a sign on ESPN’s “College GameDay” television show that read, “WAZZU YOU MAD BRO?”

WSU, of course, has long campaigned for “GameDay” to come to Pullman. After a lengthy debate, “GameDay” chose to set up shop in Philadelphia for the Temple-Notre Dame game Saturday instead of the Washington State-Stanford contest in Pullman.

Wazzu boosters only wish that had been the Cougars’ worst loss of the day. The Cougars and eighth-ranked Stanford staged a marvelous game on a miserable night marred by rain and wind, but the Cardinal rallied to edge Washington State, 30-28.

WSU sophomore Erik Powell missed a 43-yard field goal as time expired, but spare us with your tired, old “Coug’d it” rhetoric.

The Cougars outplayed the eighth-ranked Cardinal much of the way; Powell tied a school record by kicking five field goals (he didn’t miss until the end); QB Luke Falk passed for 354 yards and two touchdowns despite taking some vicious hits; and the Cougars held Stanford to 312 total yards while gaining 442.

“Washington State was very well coached, very high effort and high-energy guys up front (on the lines),” Stanford coach David Shaw said. “They hit the quarterback multiple times early on in the game, and we couldn’t get the running game started either. They were more ready and more prepared than we were.”

Shaw received no argument from his WSU counterpart.

“We should have won . . .  (but) there is no room to be satisfied with this game,” Mike Leach said. “We have to improve from here and be a better team.”

Make no mistake: The Cougars are already much improved over any of Leach’s previous three teams on the Palouse. The Cougars, in fact, bear little resemblance to the confused, somewhat lifeless bunch that tripped out of the starting gate by somehow dropping the season opener to Portland State.

“There are a lot of positives to take away from this game,” Leach said. “We played hard and tough against a good team. We did a lot of really good things on defense.”

True, but the Cougars did enough bad things on defense to make Powell’s last kick essential. The game never should have come down to Powell needing to tie a conference record with a sixth field goal.

“He put us in a situation to win that game with the field goals he made earlier in the game,” Falk said. “He is a great kicker who we have a lot of confidence in. We know he will make the kick when he is in that situation again.”

The Cougars – and Powell — can only hope such a situation does arise again. WSU (5-3, 3-2 Pac-12) needs one win in the four remaining games to become bowl eligible. A sellout crowd might be on hand Saturday when Arizona State visits on Dad’s Weekend (12:30 p.m., FOX Sports 1). A road date with talented but beatable UCLA is next, followed by a home game with underwhelming Colorado and a road contest with so-so Washington.

The Cougars’ much-maligned defense, so leaky for so long, still doesn’t make anyone’s heart swoon when compared to those of the nation’s elite defenses. However, new defensive coordinator Alex Grinch has instilled spirit and discipline in his troops. Stanford quarterback Kevin Hogan passed for just 86 yards, but he ran for a career-high 112 yards and two touchdowns. That, more than Powell’s wide-right kick, cost the Cougars the game.

“We played tough defensively,” Leach said, “but in the second half, we turned the quarterback loose. For the most part it was good, except giving up the explosive plays in the second half. Some defensive players missed their keys and their gaps.”

That’s all the crafty Hogan needed to carry his team to victory. Stanford’s senior QB isn’t all that fast, isn’t all that nimble, isn’t all that great a passer. Time and time again, however, he finds a way to win football games. The Cougars were only his latest victim.

“Kevin Hogan has so much heart,” Shaw said. “He is such a fighter.”

The Cougars, finally, have plenty of fighters of their own this season. That didn’t prevent Hogan from delivering a few knockout blows, but the Cougars have proven they can take a punch.

On Saturday, however, the scoreboard said the Cougars were losers. And yes, bro, that made them mad. Leach wouldn’t have it any other way.