Russell Wilson directed a 17-play, 79-yard drive late in the fourth quarter that ended with a 24-yard Steven Hauschka field goal and a 13-12 Seattle victory over the Dallas Cowboys. 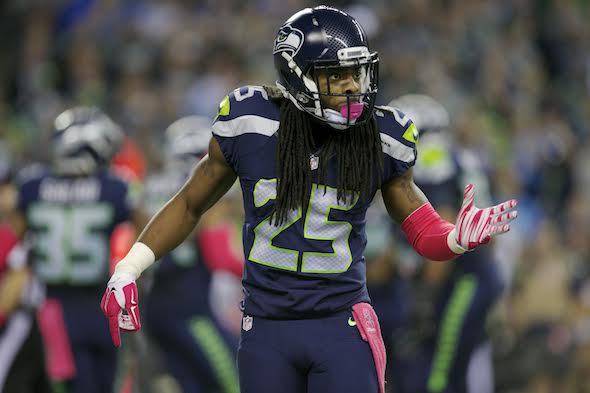 Steven Hauschka, who had a 47-yard field goal attempt blocked with less than six minutes to play, ending his NFL-best streak of 19 in a row, drilled a 24-yarder with 1:10 remaining, lifting the Seahawks to a 13-12 victory over the Dallas Cowboys Sunday at AT&T Stadium (box). Russell Wilson directed a 17-play, 79-yard drive that led to the winning score, sending Seattle into its bye week with a 4-4 record and continued relevance in the NFC West. A loss would have reduced the Seahawks to playing for only a wild card slot — a long shot at that — after Arizona (5-3) and St. Louis (4-3) won Sunday.

Facing third-and-seven from the Dallas 17 with 3:01 to play and the Seahawks trailing 12-10, Wilson scrambled around left end for 10 yards and a first down. Tha enabled the Seahawks to chip away more than a minute of clock before Hauschka kicked the winning field goal. When Dallas assumed possession with no timeouts remaining, Bruce Irvin and Cliff Avril recorded consecutive sacks to ensure a Seattle victory.

The Seahawks scored only one touchdown, a 22-yard pass from Wilson to TE Luke Willson at 5:29 of the second quarter. That was also Seattle’s longest scrimmage play of the game. Hauschka added field goals of 26 and 24 yards. The Seahawks gained 323 total yards to 220 for the Cowboys.

Seattle converted only two of eight third-down attempts before going three for four on its game-winning drive.

Wilson went 19-for-30 for 210 yards with the TD and one interception, the miscue occurring on a ball batted by DE Greg Hardy that he also intercepted. The turnover led to Dan Bailey’s fourth field goal and a 12-10 Dallas lead early in the fourth quarter.

Wilson, not sacked for the first time this season, was at his best on Seattle’s game-winning drive. He completed first-down throws to TE Jimmy Graham and WRs Tyler Lockett and Doug Baldwin. He also ran for two first downs, and now has orchestrated 16 fourth-quarter comeback wins in his four-year career, most in the NFL over that span.

Marshawn Lynch carried 21 times for 71 yards with a long gain of 12 yards, but oddly went out of bounds on a running play with 2:12 remaining that cost the Seahawks at least 25 seconds of clock.

The Seahawks held the NFL’s No. 9-ranked offense to four field goals and only 97 passing yards as Dallas starter Matt Cassel, the injury replacement for Tony Romo, went 13-for-25. The Seattle defense took away all of Cassel’s deep targets.

CB Richard Sherman shadowed Dallas WR Dez Bryant, making his first start since Week 1, and held the All-Pro to two catches for 12 yards, none in the first half. Sherman made one uncharacteristic gaffe, a holding penalty in the fourth quarter that nullified a 62-yard punt return by Tyler Lockett that could have set up a decisive touchdown.

“We’ve played some tough teams before this year, but this was an absolute battle. This was an amazing game. It was exciting and the defense was lights out” — Wilson.

Seattle WR Ricardo Lockette had a concussion during a punt return just before halftime when he was knocked cold by SS Jeff Heath. Lockette left on a stretcher and was sent to a Dallas hospital for examination, but had full movement after the play. The Seahawks said he was concussed, had a sore neck and would be hospitalized overnight . . . Back to .500 after an 0-2 start, the Seahawks had their first win in Dallas since Oct. 27, 2002 and are 6-10 all-time with the Cowboys . . . The Seahawks  are 21-6 in their past 27 games leading up to the bye week . . . Seattle is 15-8 in its past 23 road games . . . Dallas has lost five in a row.

The Seahawks have a bye Sunday and will return Nov. 15 to host the Arizona Cardinals at 5:30 p.m. on NBC. Seattle plays its next three at the Clink.