Thiel: Sounders’ Dempsey gets his way, and a win

Clint Dempsey and Andreas Ivanschitz were upon the decisive moment of the game — a free kick in the 86th minute. Who takes it? Dempsey said, “I want it.” The big-money guy did what big-money guys do. 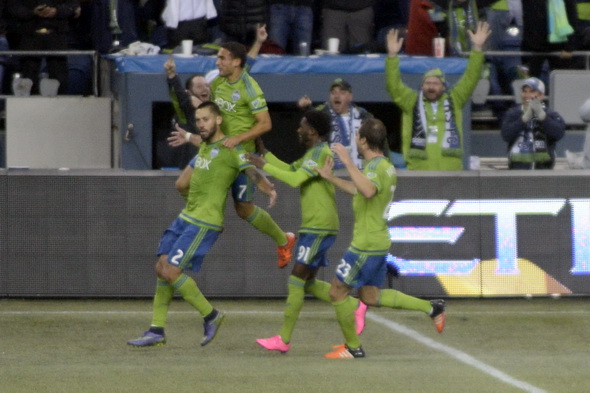 The celebration was on after Clint Dempsey scored on a free kick. / Alan Chitlik, Sportspress Northwest

David Ortiz. LeBron James. Tom Brady. Marshawn Lynch. The big-money guys are paid for the big-time moments. Clint Dempsey knows it. Sigi Schmid knows it. If Andreas Ivanschitz didn’t know it, he learned it when the big-time moment came upon the Sounders Sunday night at the Clink.

“With this pressure,” he said, “we were down 1-0 in first leg of the playoffs, then 1-1. These moments have a lot of pressure. But he’s very experienced.”

In the 86th minute of a tie with FC Dallas, Ivanschitz and Dempsey conferred during a dead ball about who was to take a free kick from 25 yards that might be the last, best chance for the Sounders to continue in the playoffs. A 1-1 draw meant Seattle was behind going to Dallas because of the weighted advantage of the road goal.

Dempsey said Ivanschitz asked, “What are you thinking? How are you feeling?'”

Ivanschitz, a 32-year-old Austrian and a 15-year year veteran of top European leagues with 93 caps, deferred.

“It just felt like it was his kick. Even if he missed,” Ivanschitz said. “I’m very happy he took it. ”

As were the 39,599 standing around them, who came unglued in the 18th minute when Dallas’s Fabian Castillo scored on a breakaway. They re-glued in the 67th minute when Ivanschitz tied matters with a brilliant run to a left-footed screamer around a defender.

When Dempsey launched his free kick over the wall and under the crossbar where GK Jesse Gonzalez would have no chance, they unglued again, for more upbeat reasons.

Sounders, 2-1. All they need is a tie next Sunday in Frisco, TX., to advance to the Western Conference finals.

“It was a perfect touch,” said Ivanschitz. “Perfect free kick — and an important one.”

That’s a great virtue of soccer — the opportunity to call on Babe Ruth anytime a foul allows for a designated hitter.

Babe . . .er, Deuce, is deep into the drill. It’s why he was he USMNT captain and a top American in Europe.

“You feel confident from taking them in the past,” he said. “I took them in Europe. I spoke with with Ivanschitz. He was confident, he scored already.”

But he wasn’t Dempsey.

“I haven’t scored on free kick this year,” he said.  “Good time to get one.

Dempsey going big in the big moment shelters the Sounders from some pressure in the series’ second leg against the West’s top-seeded team. A draw advances Seattle to the West finals.

Playing to tie doesn’t sound glorious. But they just finished three games in eight days, scored eight goals to win them all and haven’t lost since Aug. 30. So feel free to take your misgivings to someone who cares.

“It’s difficult playing three games in one week,” Dempsey said. “You don’t want to concede at home in the playoffs. We showed character to go down 1-nil and get back. We have a second leg, but we gave ourselves a better chance.”

Dempsey has scored four of the eight goals and is delivering on the purpose of his splashy signing — to bring a championship to Seattle. It has not been easy, particularly with the demands put on Dempsey regarding his USMNT obligations as well other non-MLS competitions, plus a suspension.

Now the MLS season has turned to November after beginning in March. The Seattle season could last until the Dec. 6 championship game.

Schmid, who has taken many levels of U.S. teams into international competitions, knows the drain of the pace on premier players.

“From the physical part, the important thing is regeneration,” he said. “With our key players, we have an idea what they should doing. We also try and get input from them. Everybody’s different. (Obafemi Martins), a few days after a game, he wants to play a little bit. Clint doesn’t want to play two days after a game. We let him not play.

“Emotionally, a lot of things go into it. When you play in tournaments, they are psychologically draining. It’s just a very focused, concentrated time. You want to make to sure you find that button that regenerates. The button for Clint and these guys is the same: They want an MLS Cup.”

That button has been pushed in Seattle for seven years. The Cup is the only chunk of available hardware the Sounders are lacking. Seems that the big money guys are responding when the pressure is on.