It took the Sounders 67 minutes to equalize. Then they pushed around FC Dallas at will, delivering a 2-1 home win to preserve an advantage ahead of the away leg of the Western Conference semis. 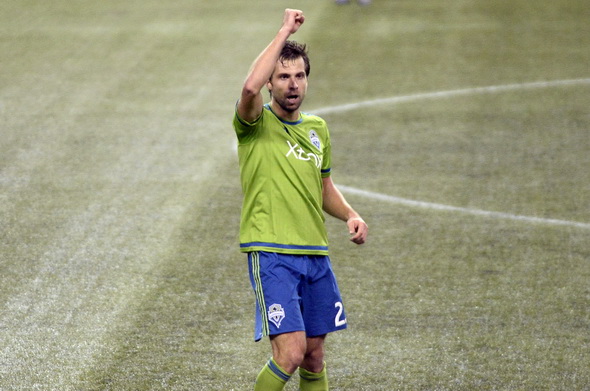 Ahead of Sunday’s first leg of the Western Conference semifinals at the Clink, Sigi Schmid outlined his plan to make it to the conference finals: Win at home, then tie on the road. For most of Sunday, it seemed as though the Sounders wouldn’t accomplish the first task. But a tremendous second-half turnaround, culminating in a masterful Clint Dempsey free kick goal, was enough to see Seattle pull back a 2-1 win against FC Dallas.

“We got caught on the counter-attack goal, but I’m really proud of the effort our guys put in,” said Sounders coach Sigi Schmid. “Three games in a week, we’ve scored eight goals in those three games. I think the guys have put in a masterful effort.”

Before the match, Schmid had warned of Dallas’ potent counter-attack, saying that they were content to sit back and wait for an opportunity to strike.

Dallas didn’t wait long. In the 18th minute, Obafemi Martins played a through ball to Clint Dempsey inside the penalty area. Dempsey collided with Dallas’ Zach Lloyd and went down, leading to a Dallas counterattack that spanned the length of the field. Mauro Diaz found a speeding Fabian Castillo down the middle, who finished one-on-one against Stefan Frei into the right side of the net.

“With a guy like Castillo, you’re just hanging on for the ride,” said defender and acting captain Zach Scott, who wasn’t quite able to hang on long enough to prevent Castillo’s strike. “He’s so good that all you can hope is to get there quickly and doubl . . . In hindsight I probably should have taken a couple of steps back and just played it as safely as possible.”

Seattle, meanwhile, was stuck spinning in the mud. The injury absences of Osvaldo Alonso and Brad Evans were bad news for the Sounders, who have relied on both throughout the season to keep the two wings connected to one another and facilitate forward attacking movement. Instead of playing up the spine, Seattle had difficulty finding one another, leading to costly turnovers.

What chances the Sounders created, they failed to finish. Erik Friberg had a volley curl inches wide of the post, while a late free kick fell to Dempsey, but his effort was stopped by Dallas GK Jesse Gonzalez. Other opportunities failed to materialize, as the Sounders tried to play short passes to one another atop the 18 that were picked away by Dallas’ back line.

“When you’re in the middle of that and there are all kinds of bodies flying around and you’re trying to make instinctive decisions, I’m not going to second-guess them at that stage,” said Schmid. “It’s something we work on all the time saying: ‘Hey, when you get into this position, let’s make sure we shoot.’

“I think when we go to Dallas we’ll shoot a little bit more.”

Seattle was lucky not have had a penalty against them in the 56th minute. A Castillo shot struck the arm of Tyrone Mears as it was extended from his body, but play was waved on. According to referee Kevin Stott, a penalty was not given because Mears’ arm “was in a natural playing position and the ball was not deliberately handled.”

In the second half, i t was Andreas Ivanschitz’ decision to call his own number and shoot that put the Sounders back in the mix.

In the 67th minute, a Sounders fast break was dismantled with a long clearance towards midfield. Ivanschitz rushed the ball and stole it off of Victor Ulloa before tearing towards the net, moving to his left as he went. Before crossing the 18, the Austrian struck the ball with his left foot, sending a bouncing shot into the far side of the net to equalize for the home team.

“His work rate has been tremendous in the playoffs,” said Schmid of Ivanschitz. “He’s got a sweet left foot, and he showed it tonight.”

After Ivanschitz’s conversion, the flow of the game changed dramatically. Seattle pressed more in the midfield, and seemed more composed as they worked the ball across the middle of the field.

Key substitutions saw Nelson Valdez and Cristian Roldan replace Marco Pappa and Friberg, respectively. Both contributed in the buildup and winning balls back in the match’s late minutes.

Roldan said that watching from the sidelines gave him the chance to spot where he could influence the outcome.

“You see mistakes that our players make, and maybe those players don’t realize them on the field at the time, but from an outside perspective you see it, and you try to change those mistakes into something positive, like going after second balls and being in the right place.”

Roldan wound up being in exactly the right place to set up the game’s deciding moment. In the 86th minute, Roldan was in a collision outside Dallas’ 18, leading Stott to whistle for a Seattle free kick. Dempsey stepped up and curled the ball over the wall and past Gonzalez’ outstretched arms to provide the game-winning tally.

With the win, Seattle holds a 2-1 advantage on aggregate scoring. Those goals will be added to the final score of the Nov. 8 fixture in Dallas to determine a victor, using the number of away goals scored as a tiebreaker. If both teams are level on goals and road goals at the end of the second fixture, the teams will play extra time, proceeding to penalties if a winner has not been decided.

A Seattle win or draw Nov. 8 will land them a berth in the Western Conference finals against the winner of the Portland-Vancouver semifinal. If Seattle loses and fails to score in Dallas, they will be eliminated. A loss by one goal in which the Sounders do score will mean extra time at Toyota Stadium.

Schmid said he planned to press the advantage in Dallas.

While changes will be necessary to disarm Dallas’ counterattacks, Dempsey, who has four goals in his last three games, has put the Sounders on the front foot to reach the conference finals.

Seattle’s win was the second of the season after trailing at the half. The other was May 31 against the New York Red Bulls in another 2-1 home win, with Chad Barrett scoring the winner in the first minute of stoppage time.