The Seahawks delivered an admirable defensive performance against the Dallas Cowboys, but they haven’t beaten an elite quarterback in the regular season in more than a year. 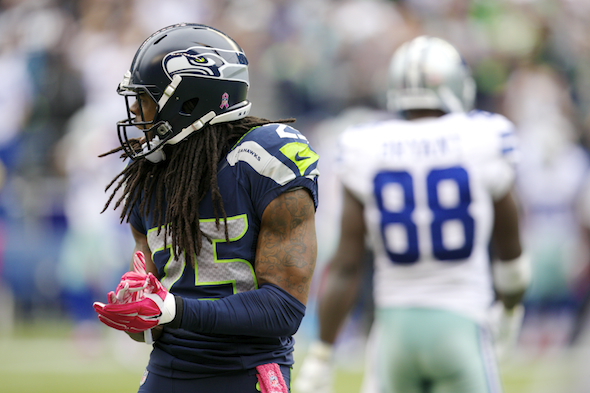 “They’ve got All-Pros all over with Richard Sherman, Kam Chancellor, and Earl Thomas. Those guys are great ballplayers, and they’ve been in the same system now for a while. They know what they’re trying to accomplish with their coverages, and also with that scheme in general. And they play well together.”

Dallas quarterback Matt Cassel stated the obvious when he talked last week about facing the Seattle secondary. But he likely never imagined he wouldn’t break 100 yards Sunday – especially with Dez Bryant back in the Cowboys’ lineup.

But Sherman, tracking Bryant wherever he lined up, erased him from the game, a big reason why Dallas had to settle for field goals instead touchdowns in a 13-12 loss to the Seahawks at AT&T Stadium.

Cassel targeted Bryant, back in the lineup after rehabbing a broken foot, five times with Sherman covering him. Bryant caught one ball for a 15-yard gain and a first down, but on four other targets Sherman knocked away three of them. On the second of two passes Bryant caught, Sherman dragged him down for a three-yard loss.

That left Cassel looking for other options. There weren’t any. Although he kept two drives alive with his legs, including a career-long 24-yard run, he finished 13-for-25 for 97 yards in his second start in place of Tony Romo. Deduct a six-yard coverage sack by Bruce Irvin near the end of the game, and Cassel finished with a net of 91. Only two of his passes covered as many as 15 yards.

In the Pete Carroll era, the Seahawks have held an opposing quarterback to fewer than 100 net passing yards only six times. Three occurred this season with the obvious caveat that two (Jimmy Clausen and Cassel) were backup quarterbacks, while the other came against Colin Kaepernick, now apparently benched in favor of Blaine Gabbert.

Cassel threw nine passes targeted at wide receivers, completing four for an anemic 32 yards. Overall, the Cowboys generated 220 yards against Sherman and the Seahawks, who held Dallas to its lowest total since a Christmas Day loss to Philadelphia in 2006, when the Cowboys finished with 201.

While Seattle’s defensive performance was impressive, the Seahawks still have not defeated an elite quarterback in the regular season (they beat a hobbling Aaron Rodgers in the NFC Championship last season) since holding off Peyton Manning and the Denver Broncos in overtime at the Clink Sept. 21, 2014.

Except for his touchdown throw to TE Luke Willson in the second quarter and the 17-play, 79-yard drive that Russell Wilson orchestrated late in the fourth quarter, the Seahawk quarterback did not have a particularly good game Sunday, finishing with a sub-par passer rating of 81.3, his lowest of the season, and his lowest in any game since a 69.2 in December against San Francisco.

But the 16th fourth-quarter, game-winning drive of Wilson’s career broke a tie with Romo for the most in the NFL over the past four seasons. Andrew Luck of the Colts is third with 13.

Many of the listed quarterbacks, especially Brady and Rodgers, didn’t have to orchestrate many game-winning drives because their teams entered the fourth quarter with a lead. So the comparison draws no conclusion about quarterbacking ability other than Wilson’s remarkable knack for making plays with a game hanging in the balance.