Leading the Pac-12 in scoring defense (16.9), the Huskies will get one of their biggest tests Saturday when they face senior RB Devontae Booker of the Utah Utes. 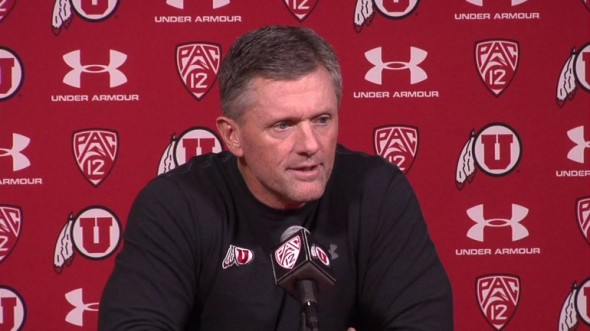 It’s astonishing, really, what the University of Washington football team has accomplished defensively this season considering that, from the 2014 squad, the Huskies lost DT Danny Shelton (Browns), CB Marcus Peters (Chiefs) and (LB) Shaq Thompson (Panthers) in the first round of the NFL draft and (LB) Hau’oli Kikaha (Saints) in the second.

A regression seemed inevitable with so many young players returning. Yet the Huskies are allowing 16.9 points per game, the stingiest mark in the Pac-12, and ahead of No. 2 Utah (21.4). The previous year, with all the future high NFL draft picks, the Huskies permitted 24.8.

“Washington is probably playing its best football of the season,” Utah coach Kyle Whittingham said this week as he launched preparations to bring his No. 13-ranked Utes (7-1) to Seattle to face the Huskies (4-4) Saturday at 4:30 p.m. (FOX TV).

“They had a great game against Arizona (won 49-3), and hit on all cylinders. They really had their way in that game for the entire 60 minutes. So we’ve got a big challenge ahead of us up at their place. Washington is the one team that we have not beat yet since we joined the Pac-12 (0-2), so it’s going to be a challenge for our guys to step up. There are a lot of parallels in how both teams have operated this season.”

Given the way college football has advanced offensively over the past 15 years, it’s unlikely any Washington team will ever match the 1991 Huskies, who allowed 8.41 points per game over 12 contests. That’s the only modern-era UW team to hold opponents to single digits.

But Washington’s current 16.9 average compares favorably to all Huskies teams that won bowl games since the 1991 co-national champion.

“First of all, Chris Petersen is an exceptional coach,” Whittingham said. “He had that great run at Boise State and now he’s putting his stamp on the UW program. We’re winning in similar fashion with really good defense, especially in the red zone, and being efficient on offense.”

The best part of the Utah offense is senior RB Devontae Booker, who figures to present the Huskies with the biggest load they have faced this season. Booker is a Sacramento native who signed with Washington State out of high school, but then enrolled in American River College in his hometown. He joined the Utes last year, made the All-Pac-12 team and scored 21 touchdowns in a season and a half. Among Booker’s achievements:

“Booker is obviously the focal point of our offense,” said Whittingham. “You know what you are going to get pretty much every week. He runs hard, is an exceptional receiver out of the backfield. He’s a guy that we count on every single week to deliver, and he does. He’s our guy.”

Booker is also Dennis Erickson’s guy. The 68-year-old vagabond is in his third season as Utah’s assistant head coach and running backs coach, following 13 previous jobs, including stints as head coach at Washington State (1987-88) and with the Seahawks (1995-98).

It’s hard to tell which achievement says the most about Erickson. He has won two national championships (at Miami), been head coach at six universities and with two NFL franchises, is the only man to win Pac-12 Coach of the Year at three schools, won coach of the year awards in the Big Sky and Big East, and coached 16 All-America choices, including winners of the Heisman, Outland, Lou Groza, Vince Lombardi, Davey O’Brien, Johnny Unitas and Bronko Nagurski awards.

On the other hand, getting hired 14 times from one end of the country to the other also says a lot about the Everett native. He’s either a man much in demand or he wears out a lot of welcomes, we haven’t figured out which. But this much we do know: Not even basketball’s Larry Brown, that sport’s ultimate wandering coach, has been employed more times. How their jobs stack up:

Utah is ranked in the Associated Press Top 25 for the ninth consecutive week . . . Utah is 2-0 against the Pac-12 North with wins over Oregon and California, both winners over Washington . . . Washington is 8-0 all-time against Utah . . . Utah defensive coordinator John Pease coached Washington’s defensive line from 1979-82 when the Huskies played in four bowls — two Rose,  Sun and Aloha. During that time, Pease coached all-conference players Doug Martin, Mark Lee, Ray Horton, Fletcher Jenkins, Mark Jerue and Mark Stewart. This year, Pease coaches the No. 2 scoring defense in the Pac-12.