Thiel: Trade may be just a start of M’s makeover

The Mariners’ starting pitching was in such tatters that new GM Jerry Dipoto’s first major trade brought RHP Nathan Karns, a rookie last year who was immediately given a rotation spot. 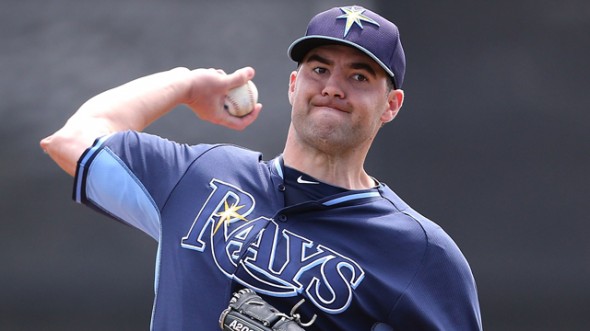 Starting pitcher Nate Karns was the key in the deal for the Mariners. / mlb.com

Since the Mariners by the end of the season were one more bad outing from soliciting starting-pitcher help from beer-truck drivers jockeying kegs into Edgar’s Cantina at Safeco, it was little surprise that new general manager Jerry Dipoto immediately sought assistance when baseball’s hot-stove league began.

The acquisition of RHP Nathan Karns was so urgent that Dipoto not only shipped off regulars Brad Miller and Logan Morrison to Tampa, he already told Karns he’s in the Seattle rotation.

“This is the first time I’ve been told told I’d be in the rotation prior to spring training,” Karns said via teleconference Friday with Seattle reporters. “I take pride in it. But I also assume the responsibility for it. It’s another reminder I have a duty to be ready.”

Besides being a small blow to backup catcher Jesus Sucre, who pitched twice last season and figured to have a shot at a new career trajectory in spring training, Karns’ acquisition is a start to what may well be a magnum makeover of the Mariners roster this off-season.

Karns was the key for Seattle in the deal that sent three players to Tampa, which was in need of mediocre left-handed hitting, of which the Mariners were in plentiful supply.

The attempt by then-manager Lloyd McClendon to convert Miller (.247 BA,  .707 OPS career) to an infielder/outfielder/kick returner utility job had enough mixed results that both men are no longer in Seattle. Nor is Morrison, one of the Mariners’ many thick-armed, thick-legged batsmen of whom Dipoto seems disdainful.

“Pitching and defense,” Dipoto said at his Seattle first press conference after succeeding as GM Jack Zduriencik, whose affection for offensive linemen was virtually limitless. Besides Karns, the Mariners obtained minor league outfielder Herschel Mack Powell IV, who at 5-10 and 185 pounds bears no resemblance to, nor shares a DNA pool with, former major league all-star John Wesley Powell (6-4, 250), yet both share the nom-de-guerre Boog.

In fact, Powell the the Light, who at 22 has yet to reach the majors, is the antithesis of Boog the Heavy.

“Boog is a catalyst — a top-of-the-order (type),” Dipoto told ESPN 710 radio. “He’s got outstanding plate discipline, he can steal bases, and he can play defense. When we set out to create a model, a style of play that’s more athletic, more speed, better defense in the outfield, Boog Powell fits that mold. He can play any of the outfield spots. He’s athletic enough to be a center fielder, and right now, that’s where he fits with us.

“We feel like we bring in — whether in April or in July or sometime later in the season — a guy who can impact 2016 and have an effect on the ballclub for years to come.”

Powell was chosen in the 20th round of the 2012 draft out of Orange Coast Junior College by the Oakland A’s, under whose care he was busted for using a banned amphetamine and served a 50-game suspension.

The deal included a swap of relief pitchers, Danny Farquhar from Seattle and C.J. Riefenhauser from Tampa, but both have enough questions about their futures to be described as throw-ins.

In the rotation, the Mariners can see Karns falling in behind Felix Hernandez, Taijuan Walker and Hisashi Iwakuma, to whom they offered Friday the one-year qualifying offer of $15.8 million that they hope will keep him from free agency. James Paxton is probably in the mix too, but with his health history, might start spring training on the disabled list from a bad haircut.

Irony alert: One of the pitchers helping bump Karns off the roster was Erasmo Ramirez, the former Mariner traded for Mike Montgomery March 31. Naturally, Ramirez blossomed immediately upon ditching the compass rose (11-6, 3.75 ERA, 126 strikeouts in 163 innings as a starter). Montgomery, not so much.

Emotionally, Karns, a native Texan, sounded as if he were over the surprise of the trade, although given Tampa’s overload of starters returning from injury, it shouldn’t have been a shock.

“It caught me off-guard — I had no idea this was brewing,” he said.  “But I took it as blessing and a new chapter in my career.”

He is also the first starter hired in Dipoto’s new chapter in Seattle. Beer-truck drivers, stand down. Smoke ’em if you got ’em.