After four turnovers and a muffed punt, the Huskies gave Utah so many chances that it finally broke Washington’s splendid defense in a 34-23 defeat that puts a bowl bid in serious jeopardy. 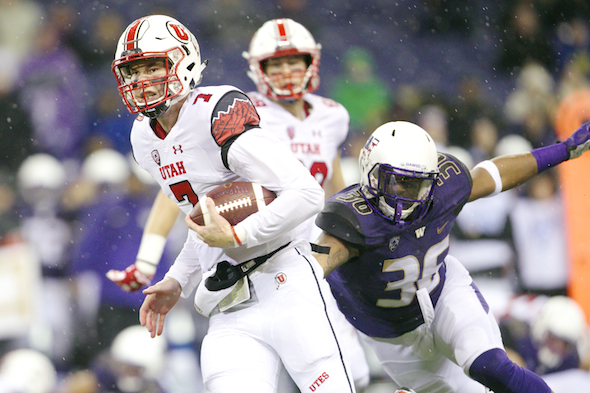 “We just kinda went through the motions,” said LB  Keishawn Bierria. “We lost our edge. That’s on me, Travis (Feeney), the older guys on the defense.”

True as it may have been, they were stuck trying to win the pot after their bumbling offensive teammates, even more bumbling officials, and decidedly less-bumbling Utah Utes left them holding a pair of deuces.

After recovering from a 24-point second quarter by the Utes, who exploited a numbing cavalcade of Huskies errors, the defense stoned the nation’s 13th-ranked team. But midway through the fourth quarter leading 24-23, the Utes finally began stringing together first downs.

With 3:29 remaining, Utah’s impressive 6-foot-7 senior QB, Travis Wilson, shoved himself into the end zone from two yards out for the decisive score in a 34-23 triumph that will leave the purple crowd muttering for the rest of the season.

That season could end up short — as in, bowl-free. The 4-5 Huskies must win two of the final three games at Arizona State, at Oregon State and at home for the Apple Cup and revived Washington State, to be bowl-eligible.

A week after filleting Arizona 49-3, the Huskies regressed, as young teams are wont to do. Even though the defense was left to save the night — without their best player, DB Budda Baker, out for the final three quarters with what appeared to be a concussion — responsibility for the circumstance fell to others, in purple and in stripes.

“I was really hoping we’d go out there and swing toe-to-toe with these guys,” said a crestfallen UW coach Chris Petersen. “For us to do that, we couldn’t give them anything easy.”

But they gave as if UW was a gridiron Gates Foundation.

Three fumbles lost (two by RB Dwayne Washington, one that turned into a 54-yard scoop-and-score), an interception of QB Jake Browning that was turned into an eight-yard Utah TD drive, and a snap muffed by punter Korey Durkee that provided a short field for a Utes drive to their first TD and a road-team lift that subdued the 61,420 that were said to be in-house customers.

Whew. The game was Utah’s first appearance in Husky Stadium in 36 years. For a place so generous to them, they will not want to let pass another three-plus decades before a return.

“It was like it’s been all season,” Petersen said. “Really good flashes, and some really bad football — turnovers, dropped balls, even our tackling at times wasn’t good as we like.”

The failed tackling was noticeable on the game-deciding drive — 60 yards, all runs, six by senior RB Devontae Booker, who finished with 150 yards on 34 carries, and three by Wilson, whose 10 carries for 42 yards may have been just as damaging for their timing. You know, sorta like another Wilson in town.

But what most chapped the crowd and players were two UW touchdowns called back via penalties and a third call that was most egregious. Trailing 24-23 in the final period, Browning had a 21-yard completion to TE Josh Perkins at midfield nullified by an offensive pass interference call on him.

Stadium replays showed incidental contact between Perkins and his defender, igniting a firestorm of boos that lingered for the rest of the game. The negated gain, plus the 15-yard penalty, took 36 yards away from Washington and eventually forced a punt that preceded Utah’s game-clinching drive.

Pac-12 officiating has been inundated with criticism for years. Several conference games this year have turned on erroneous calls. No one seems to be offering solutions. The problem grows to the point of requiring intervention by the National Guard.

“You saw what I saw,” Petersen said, biting his tongue. “Yeah.”

But nothing can be done to fix Saturday’s callbacks and screw-ups.

“It’s crushing,” he said. “That was huge. Having two touchdowns called back and then giving them another one on offense, those are really hard to overcome — especially when you’re playing someone that’s really pretty good.”

A roster of 52 freshmen (true and redshirt), 24 sophomores and 13 seniors is not capable of holding off a senior-laden bunch like the Utes.

“Anytime you get touchdowns called back, it’s really hard to come back from,” said sophomore WR Brayden Lenius, who was called for a holding penalty that nullified one TD.  “We just gotta get better and learn from our mistakes.”

The crash course begins immediately, because getting to a bowl game shouldn’t be that hard — there’s 42 bowls and 84 berths for a sport that has only 127 teams.

Until President Obama declares Pac-12 officiating a disaster area in order to deploy the National Guard, the Huskies have no choices but to shed the diapers and put on the big boy pants.