After three goals were scored in seven late minutes, Seattle could not outlast a younger FC Dallas team and fell 4-2 on penalties, ending ingloriously the Western Conference semifinals, as well as its season. 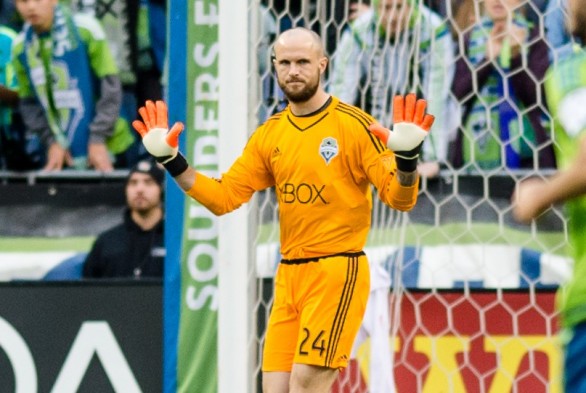 Stefan Frei stood on his head to keep the Sounders in Sunday’s contest, but was out of luck as Seattle was eliminated from the playoffs on penalties. / Jane Gershovich, Seattle Sounders FC file

For an instant Sunday, the Seattle Sounders looked like the team of destiny. Then the moment passed. After a late goal put them ahead on aggregate, it looked as if the Sounders were bound for the conference finals, but a final collapse shattered a hopeful season as they tied FC Dallas 3-3 on aggregate, losing 4-2 on penalties.

“We thought that we would work hard and that we deserved something,” said keeper Stefan Frei. “It’s very unfortunate to not get rewarded for sticking together and fighting.”

In a way, what is surprising is not that the Sounders were defeated Sunday, but that they were playing at all. A summer’s worth of poor form, absent chemistry, and abysmal results saw the team go 1-9 in the middle of the season, as players dropped left and right due to injury or suspension.

Then, after a slew of big-budget, high-profile acquisitions were brought into the fold, the team’s fortunes seemed to reverse, as it went unbeaten over its final nine regular season matches and vanquished its longtime postseason tormentor, the LA Galaxy, Oct. 28.

Entering Sunday, with a 2-1 lead on aggregate after the home leg against Dallas, it was possible to perceive Seattle as the favorite, even though they were matched up with the number one seed in the Western Conference. That simply wasn’t true.

Seattle gritted its teeth to outlast the Galaxy, benefiting from defensive miscues on all of its goals. The team carried a goal advantage into Sunday’s contest thanks only to a Clint Dempsey free kick late in the first leg, after an unconvincing response to the question of how they would handle Dallas’s superior speed.

The situation Sunday was exacerbated by the absences of Osvaldo Alonso, Brad Evans and Leo Gonzalez due to injury, forcing Seattle to lean on an injured Zach Scott and the young Oniel Fisher, who struggled to match the pace and energy of Dallas’ forwards.

The opening 20 minutes witnessed a frantic back-and-forth affair, each side coming close to scoring. Despite the fight, the Sounders were unable to establish a consistent midfield presence, effectively creating a barrier between the attacking third and the rest of the field.

After it became apparent that Seattle could not count on midfield possession, the team hunkered down to protect its lead, packing players behind the ball on defense and letting the offense consist of knocking the ball toward Obafemi Martins at forward and seeing what the Nigerian could produce.

Unfortunately for Seattle, Martins finally ran out of ideas. Absent adequate midfield support, his frantic energy was disjointed and lacking typical physical finesse. The Sounders ran out of gas, spending the majority of the match lying down in front of Dallas shots.

Dallas controlled the ball for 55 percent of the match, outshooting Seattle 25-10.

But as uninspired as the Sounders’ offense seemed, the defense was spirited.

Frei, in particular, turned in one final,  jaw-dropping performance in 2015. He made eight saves, many of which involved shots that were taken within 10 yards of the net, including catching a header attempt from Fabian Castillo while lying flat on his back.

After the match, Frei was too disappointed to reflect on his 10-shutout season.

“In the end, maybe when I have a clear head, I’ll look at it and say it was a decent season for me personally, but right now, it’s not really possible,” he said.

Eventually, Frei’s highlight-reel saves were exhausted. In the 84th minute, Je-Vaughn Watson took the ball into the right alley, striking a cross that found the head of substitute Tesho Akindele, ricocheting into the net to end the scoreless tie, and tie the aggregate score, bringing Dallas’ road-goal advantage into play.

Needing a goal to keep the pressure on, Seattle looked like a stalled engine at first, but slowly made progress over the final six minutes of regulation.

Desperate to notch a goal, coach Sigi Schmid removed Fisher from the back line in favor of Marco Pappa.

Pappa provided the spark in the form of a 90th minute corner kick. Chad Marshall leaped and headed the ball over the line, giving Seattle a 3-2 lead on aggregate with what seemed certain to be the series winner.

A minute later, FC Dallas won a corner kick of its own against Andreas Ivanschitz, who shifted to right back to make up for Fisher’s absence. The first cross was knocked away, but was tipped back into the penalty area as the defenders stepped away from their marks. Another substitute, Walker Zimmerman, whipped his head to the right and sent the ball into the net to force extra time.

“We were trying to get the message out to the field for (Cristian) Roldan to go to left back and for Ivanschitz to come into the midfield, but we couldn’t get that message to our players,” said Schmid. “We couldn’t make that switch until the overtime.”

Out of substitutions and out of gas, Seattle’s lineup in extra time looked as ramshackle as it did at any point during the summer slump, with Chad Barrett playing central midfield and the planned shift of Roldan to left back, as Dallas shifted to a 4-1-4-1, eager to make use of its younger, fresher legs.

After an additional 30 minutes of scorelessness, Seattle’s season came down to penalties. Dallas GK Jesse Gonzalez, 20, saved efforts from Ivanschitz and Barrett, before Zimmerman stepped up and smashed the ball past a rooted Frei to send Dallas on to the Western Conference finals.

As the sun set on Schmid’s seventh season at the helm, again without an MLS Cup, he was asked if he planned to return.

“(I do want to come back), but that’s not my decision. That’s the ownership’s decision and they’ll decide that,” said Schmid, who went on to say that his health that caused him to miss two matches in August weren’t a concern. “I feel fine and I still feel capable of coaching.”

Asked if he had anything to say to the fans, Schmid focused on Seattle’s record of success.

“There’s nothing the guys in the room want to do more than bring an MLS Cup back to Seattle, and hopefully, one day, that’ll happen.”

Whether Schmid and some of his aging veterans are still with the club when it happens will be the question of a long off-season.

For the now the Sounders will cling to a wish—not a trophy—as they watch Dallas and Portland, 2-0 winners over Vancouver, play for the West’s spot in the MLS Cup Dec. 6.