The Seahawks thumped the Cardinals twice in 2014, but with QB Carson Palmer and new RB Chris Johnson, this isn’t the same team. Seattle DE Michael Bennett explains the scene, as only he can. 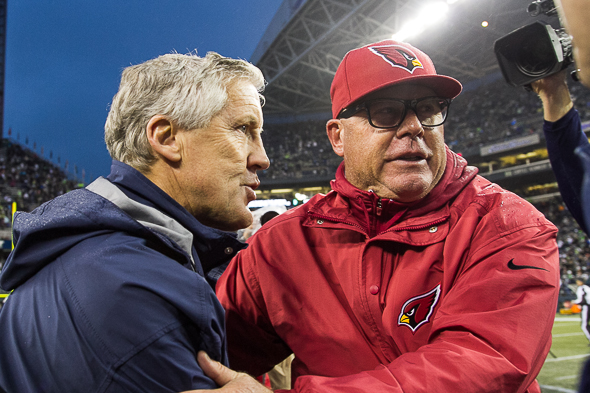 The Arizona Cardinals were 9-1 the first time they met the Seahawks in 2014. The 6-4 Seahawks won 19-3, beating up on backup QB Drew Stanton. A month later in the desert, the 10-4 Cardinals, down to third-stringer Ryan Lindley, lost to the 10-4 Seahawks, 35-6. So to say the Redbirds have a red-ass for their NFC West rivals understates the case by a liniment tube or two.

For Sunday’s 5:30 p.m. match at the Clink, the Cardinals again have the better record (6-2 vs. 4-4), yet are three-point underdogs partly because of their dubious recent history with the Seahawks.

This time, however, the Cardinals are deploying at QB Carson Palmer, who is, in the view of his former coach at USC, Pete Carroll, “the best I’ve ever seen him in all of the years he’s been out there.”

That’s 13 years. And he’s right. At 35, Palmer has a career-best 84.6 QB rating, a ridiculous, league-leading 9.2 yards per passing attempt and a touchdown percentage at 7.7 percent.

But Seahawks DE Michael Bennett is not one to swoon readily.

“Carson’s a great QB but no matter who it is, we’ve beaten them,” he said Monday after the team returned from their bye week. “Carson being there (gives) them a deep ball. But they’re a running team.”

That’s the big difference this season. The Cardinals hired in free agency nine-year veteran RB Chris Johnson, whose 676 yards rushing are third in the NFL.

“Chris Johnson is an experienced back,” Bennett said. “He can do a lot of things.”

But that didn’t seem to impress Bennett.

“Every offensive line is the same to me,” he said. “Big, fat, nasty guys who stink.”

There may be a time when it’s hard to get Bennett to say what he really feels. Monday wasn’t one of them. He also offered affection for the man who has helped upgrade the Cardinals the past two seasons, Bruce Arians, who’s been the NFL coach of the year two of the past three years.

Plus, Bennett likes his style, even if that included working his players three times during the bye week while the Seahawks were free to relax the entire time.

“I think it’s the hat,” said Bennett of Arians’s trademark chapeaus. “He got that swag. Reminds me of myself. He answers questions with a lot of enthusiasm. I think he’s a cool guy.”

On another topic, Bennett said he plans to appeal the $20,000 fine he received from the NFL for a hit during Seattle’s 13-12 win over the Cowboys when he went for the knees of QB Matt Cassel, who was uninjured. Bennett claims to have argued his way out of three previous fines.

“I got the gift of gab,” he said, grinning. But he still wasn’t pleased with the fine.

“The best place to hit a quarterback is nowhere,” he said. “If you do that, you won’t get paid a lot of money, but you won’t get fined.”

Bennett said he “fell into” Cassel’s knees, but replays showed him moving up from the ground to lunge low.

“I don’t understand the NFL when it comes to fines,” he said. “The things you think are fine-able aren’t, and then that hit (Vikings QB Teddy) Bridgewater took (knocked unconscious Sunday by a late elbow from Rams LB Lamarcus Joyner), he slid, and that’s considered a dirty hit. And Ricardo Lockette’s was a clean hit. It doesn’t make any sense. It’s all about the position the player plays that decides what’s fine-able.”

Speaking of Lockette, Carroll confirmed that the wide receiver and special teams ace was to have flown back to Seattle from Dallas Monday, eight days after he was knocked out during a punt return from a blow by Cowboys SS Jeff Heath. His recovery was proceeding normally but he faces “considerable” rehab after surgery that repaired neck ligaments and discs that were damaged, Carroll said.

Bennett chimed in on Lockette too.

Give Michael Bennett a bye, and the man cannot help himself.