The Seahawks and Sounders were listed as recipients in a U.S. Senate investigation of sports teams paid in taxpayer dollars for “hero tributes.” Pete Carroll promises to get back to us on that. 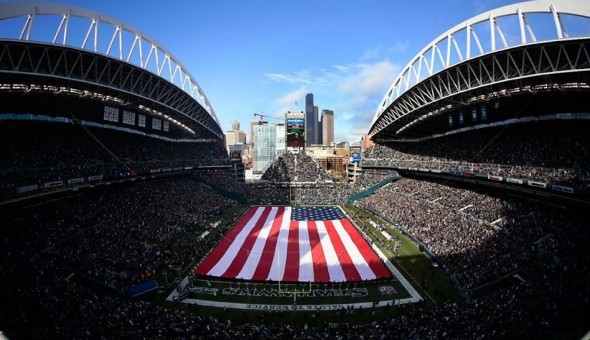 Bigger the flag, better the patriotism?

Usually, Pete Carroll has an answer, however oblique, for just about everything. Not this time.

Asked Wednesday about a U.S. Senate report last week that disclosed the Seahawks were one of 18 NFL teams, along with the MLS Sounders and teams from MLB, NBA and NHL, that received $53 million from 2012 to 2015 in taxpayer-funded Department of Defense contracts — some of which Sen. John McCain (R-Az.) called “paid patriotism” — the Seahawks coach declined to say what he thought. “I don’t have a comment; I heard he said something,” he said. “I’ll read the article and get back to you.”

An awkward moment on Veterans Day, no doubt.

For years, sports teams have been wrapping themselves in the flag, inviting active and retired military personnel to participate in “patriotic tributes,” some of which the Senate investigation discovered (complete with an old-time, football-program cartoon of Uncle Sam being tackled) were paid for by Pentagon funds.

“It’s really disgraceful that NFL teams whose profits are at an all-time high had to be paid to honor our veterans,” said McCain, a prisoner of war in Vietnam, during a presentation in the Senate of an investigation he helped order, promising a challenge to the practice during upcoming budget negotiations.

Fellow Arizona senator John Flake, who was with McCain on the double-team, said the National Guard and other branches of the military often use sports events for recruiting efforts, an expense Flake said could be appropriate, but he suggested it may not be effective.

“Unless they can demonstrate some ability to actually recruit with this money, then they shouldn’t be spending it. And I’m pretty skeptical,” Flake said.

Among the more noteworthy episodes, the Air Force paid the Cincinnati Bengals for 60 club-level tickets. On a military appreciation night, the National Guard paid the Boston Bruins for a luxury box for 18 people and an executive view suite for 25. The National Guard paid the Indianapolis Colts for a luxury suite, autographed items, pre-game field visits, and cheerleader appearances.  The New York Jets received $20,000 in exchange for a “Hometown Hero” feature on the MetLife Stadium videoboard.

In response, the Seahawks issued a statement last week that they have an advertising contract with the Washington Army National Guard dating back to 2012, which includes “media and marketing elements to increase awareness and aid in recruiting efforts. But the re-enlistments, enlistments, flag retirements, player appearances and the high school coach of the week programs were provided at no cost but outlined in the agreement at the request of WAANG.”

The Seahawks also listed other items/events given without charge, including Heroes 12 Seats, military base visits, a military day at training camp, re-enlistment ceremonies and wounded-warrior seats.

The Seahawks likely have donated much more than they received in revenues — TV networks, websites newspapers all run recruitment ads — and commissioner Roger Goodell said the NFL will pay back money teams received from the DOD if the league finds that “inappropriate payments were made.”

But why even take the money and cast a shadow over the sports operation?

The facts the report uncovered already have done damage to the credibility of DOD and the sports leagues. Fans have no way to discern which ceremony is sincere what is paid patriotism.

Unsurprisingly, CB Richard Sherman, who had seen the headlines but was filled in on the Senate report, was willing to offer an opinion.

“I can understand where, if you’re doing something for nothing, and someone offers to pay you, you might take the money,” he said. “But in this case, it just cheapens everything.”

Exactly. National anthems and flag-raisings are one thing, but sports teams that showcase their deeds with the military are guilty of self-aggrandizement. Ticket donations, visits, partnership programs for donations fundraising all are deeds worth continuing, but getting tax dollars beyond recruitment ads is yet another taxpayer abuse. As the report said:

“It is time to allow major sports teams’ legitimate tributes to our soldiers to shine with national pride rather than being cast under the pallor of marketing gimmicks paid for by American taxpayers,” McCain wrote in the report.

Hard to imagine why the Seahawks and other sports teams who have such a high public profile think taxpayer cash from the Pentagon is worth the awkward moments, much less a cheapening of the deeds they purport to hail.