14-year veteran eliever Joaquin Benoit, 38, had a good season with the San Diego Padres and now belongs to the Mariners after a trade that cost two minor league prospects. 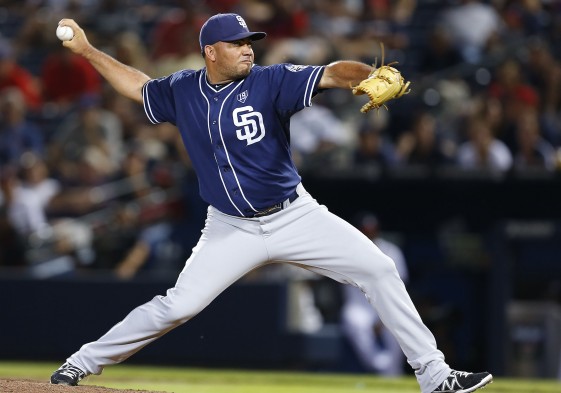 NL right-handed hitters had a .144 average against Joaquin Benoit the past season. / San Diego Padres

“Joaquin is a proven late-game presence who brings both stability and impact to the back end of our bullpen,” said GM Jerry Dipoto. “We value his experience, track record of durability and consistently high-end performance.”

“He was a target for us as we went into the offseason,” Dipoto said. “We’re happy to bring him aboard. He’s nearing 40 years old but he hasn’t lost his effectiveness. He still throws in the mid-to-upper 90s. He’s got three pitches for an out-pitch, and his change is lights out.

“Where he pitches in the game is going to be up to (manager) Scott Servais and (pitching coach) Mel Stottlemyre. Whether it’s in a set-up role or a closing role has yet to be determined. But he’s been a sought-after commodity on the trade market for a long time.”