Some lessons from Sounders’ summer of woe

Sigi Schmid will be back next year as head coach. No doubt he will have learned some valuable lessons from the most dismal summer in team history. 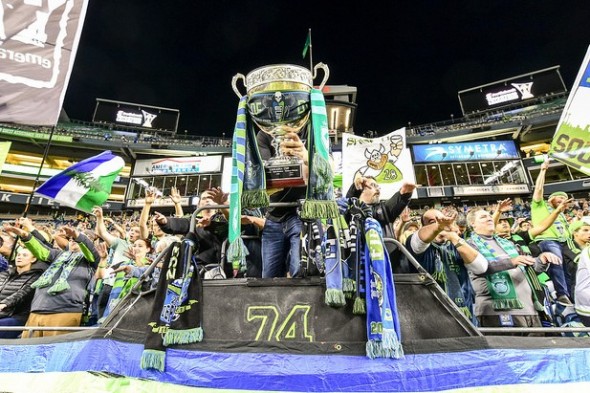 In a season where the Cascadia Cup is the only trophy coming to Seattle, lessons learned are many, and painful. / Josh Weisberg, Seattle Sounders FC

At the Seattle Sounders’ annual business meeting Thursday,  Adrian Hanauer ascended to majority owner, succeeding Joe Roth, who remains in the group. They also signaled the return of Sigi Schmid as head coach in 2016; GM Garth Lagerway said Schmid “is our coach. Sigi will be our coach.”

The news will be a relief to those who thought Seattle’s exit from the postseason after a penalty shootout loss to FC Dallas signaled the end of Schmid’s seven-year tenure at the helm.

Realistically, dismissing Schmid after he brought the Sounders to the postseason after the summer his team endured would have been short-sighted. But Seattle’s summer slog will have taught the team important lessons that Hanauer, Lagerway and Schmid will have to address as the Sounders prepare for next season.

The summer proved no matter how bleak things look, they can always be worse. The summer wasn’t a matter of “Where did it all go wrong?” but more of “Where did anything go right?”

Even as the wheels turn and deals and dismissals are weighed and measured, it is worth considering what led to Seattle’s summer belly-flop into MLS purgatory.

Trouble started June 16, in a U.S. Open Cup against the Portland Timbers. The match saw Brad Evans and Michael Azira sent off. Obafemi Martins limped off with a groin adductor injury after scoring the lone goal in the 3-1 loss. Clint Dempsey saw red—literally—more than earning his ejection for tearing up referee Daniel Radford’s notebook after Azira was sent off.

Dempsey was suspended three games by the league for his foolishness. His absence, combined with Martins’ injury, meant Seattle would have to go without its two main weapons up top; weapons that had scored 14 of the Sounders’ 23 goals through the first 15 matches.

Without the two out, as well as midfielder Osvaldo Alonso, who had a hamstring injury ahead of the Open Cup game, the Sounders showed up to MLS gunfights merely with bare fists. Results were what might be expected. Three losses in a row culminated in an atrocious performance in a 4-1 road loss to the Timbers.

The CONCACAF Gold Cup drew away Dempsey and Evans to USMNT duty, and took away Marco Pappa to play for Guatemala. Alonso returned for Seattle’s 1-0 win against D.C. United July 3, but that win cost them GK Stefan Frei, who left in the first half with a sprained shoulder.

Seattle hoped its immediate schedule would lend a little leniency to its vulnerable state. It was not to be. For three consecutive matches—two against last-place teams—the Sounders gave up a game-winning goal after the 80th minute of play.

More worrisome than results were the lineups and an apparent lack of depth. The Sounders gambled and lost calling up Andy Craven from from the S2 reserves, losing the forward to injury, but not before his play showed that he wasn’t ready for the sudden jump to the big time. Darwin Jones, another homegrown rookie, showed great speed, but clearly lacked the technical and mental preparation to attempt to fill Martins’ shoes.

Other youngsters acquitted themselves well. Oniel Fisher, Cristian Roldan and Dylan Remick turned in energetic performances, proving that with further development, they can become solid first-teamers. The issue is that these performances were primarily defensive. The Sounders couldn’t hit the net, and the inevitable late-game letups from playing defense for 70 minutes or more meant the losses piled up.

In defense of the youngsters, the veteran backups didn’t shroud themselves in glory, either. Lamar Neagle struggled to bear the burden placed upon him. Chad Barrett, 30, showed signs of age when he pulled his hamstring while celebrating his lone goal of the summer against the Galaxy.

As the Gold Cup drew to a close, absences were extended. Marco Pappa rejoined the team for a July 18 home loss to the Colorado Rapids, before being arrested early the next morning for DUI. Pappa was recorded with a .174 blood-alcohol level and was immediately suspended by the league pending treatment.

Dempsey and Evans returned from Gold Cup duty in time to take part in a 3-0 shellacking by the Vancouver Whitecaps on home turf, the first match of what would become a grueling August.

Desperate to provide something positive, the front office looked outside the organization. This translated into the purchase of four international players over the course of the summer: Swedish Erik Friberg, Austrian Andreas Ivanschitz, Paraguayan Nelson Valdez and Panamanian Román Torres, in addition to the purchase of the Brazilian Thomás before the summer slump.

Integration of new talent did not go smoothly in all cases. Friberg openly admitted that his fitness was not at the level required, but was thrust into the first match after his transfer anyway. Ivanschitz was delayed due to paperwork issues, and picked up a quad injury shortly after his arrival. Thomás showed promise on the left wing, but as with his young American teammates, couldn’t translate promise into goals.

Torres and Valdez arrived and quickly established themselves, with Valdez scoring in his debut game against Orlando City. It seemed that you could, in fact, buy goals.

Having done its best to spend out of trouble, Seattle seemed to rebound from ill fortune, picking up a Champions League win against Honduran squad C.D. Olimpia thanks to a late penalty.

Misfortune, however, wasn’t done with the Sounders. Schmid himself missed two games after being hospitalized for a health issue still unexplained that occurred in the early hours of the morning before a match against Toronto. Additionally, three players were injured in a road match against San Jose, notably Torres, lost for the season due to a torn ACL.

Torres might have been the final sacrifice the soccer gods required.  After an Aug. 30 loss to Portland, the Sounders went unbeaten in the regular season’s final eight matches, finishing 15-13-6 and fourth in the Western Conference playoffs seeding, even while losing Chad Marshall for a week after the defender sprained his neck in practice.

Ultimately, the cost was too high. Alonso and Evans were once more removed due to injury, with Evans’ hamstring giving out on a last-ditch tackle to stop a Galaxy attack as the Sounders finally outlasted the Los Angeles nemesis in the postseason.

Had the Sounders made it to the MLS Cup, there would be an inclination to spin the season as a Cinderella story. Had they failed to make the postseason, comparisons to the Titanic would have been drawn.

The legacy of the season lies somewhere in the middle. What did the Sounders accomplish, apart from managing to outlast the Galaxy in the playoffs? They won the Cascadia Cup, but it seems like a consolation prize.

Management demonstrated it was willing to try to buy its way out of a bad situation, but also demonstrated the serious issues of depth, discipline, and motivation need to be addressed, within the constraints of the salary cap.

The first-teamers are willing to fight, but aging legs dragged as the season finished, and persistent injuries to the team’s main contributors played a major role in tailspin. For all its experience, the Sounders were out of gas in the playoffs against younger, faster Dallas.

Schmid said the players want nothing more than to bring the MLS Cup, the last major accolade that eludes the franchise, to the Emerald City. What the organization must consider is whether the summer was a fluke and that the current team is the way forward, or if the reality is that the current incarnation of the Sounders is not properly configured to bring the title home.