After a week of travel encounters, the Huskies and Texas Longhorns play the first U.S. regular-season basketball game, collegiate or professional, at 7 p.m. PT in Shanghai. 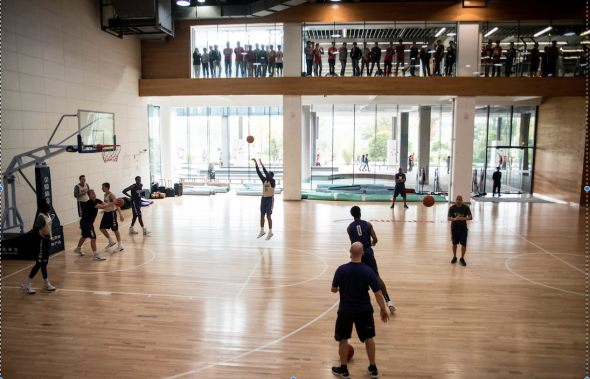 At a court on the Hangzhou campus of China’s e-commerce giant Alibaba, the Huskies practice under the curious watch of employees. / Kaia D’Albora, University of Washington Daily

SHANGHAI — Most of the members of the University of Washington men’s basketball team had never been out of the country before last week. So to say the Huskies’ trek to China for its regular season opener against Texas at 7 p.m. PT Friday (ESPN) is just another business trip would be quite the understatement.

The Huskies, who sport 10 newcomers and eight freshmen, have one player who had been to China. Redshirt senior guard Andrew Andrews traveled with a Pac-12 Conference all-star team to play three exhibition games in Shanghai and Beijing in 2014, and along with walk-on K.J. Garrett, is the only player to have traveled at least 5,000 miles round-trip.

While most of the roster will enjoy getting their first stamp in the passport, UW’s goal is to come home with a win in the first regular-season basketball game, professional or collegiate, to be played in China.

The Huskies’ journey began before the week leading up to the game. Since most of the players had yet to travel internationally, applications began for passports and visas before  arrival on campus in September. A native of Dakar, Senegal, junior post Malik Dime had to fly from Seattle to New York in July to meet with the Senegalese consulate to have his passport approved.

Sunday afternoon, after a two-hour delay, the Huskies departed SeaTac and arrived in Shanghai late Monday night. After landing at Pu Dong Airport they trekked to Hangzhou, where they spent Tuesday at Alibaba, the Chinese e-commerce giant that has been compared to Amazon. The Huskies met founder and CEO Jack Ma, and practiced in front of representatives from the Pac-12 and Alibaba employees.

The Huskies schedule has since slowed down. They have spent the past three days in Shanghai. The Huskies took a boat trip along the city’s prime tourist attraction,  The Bund, and practiced Thursday with a dozen Chinese Special Olympic athletes.

The UW is using the trip as an educational opportunity Each player will earn three credits during the stay. Before school began in September, players took a course taught by professor Shawn Wong on Mandarin and the Chinese culture. Each player was required to give presentations at stops on the trip.

Some have been surprised by the sheer number of people in Shanghai, where the population estimate is 24 million, compared to seven million in Washington state. Others were dismayed at the air quality, as pollution fills the air like a fog.

Sophomore forward Donaven Dorsey was shocked by what he sees on the roads.

“I’m surprised by how crazy the drivers are,” Dorsey said. “It’s ridiculous.”

Dorsey and the rest of the Huskies will try to shock the Longhorns, an 11-point favorite, in front what is expected to be a sellout crowd at Mercedes Benz Arena.

“I’m excited because it’s the very first game here in China and we have been preparing a lot for it,” freshman guard Dominic Green said. “We are just ready to play.”