Arizona State blew past a suddenly inept Washington offense in the second half to score 27 unanswered points in a 27-17 win that Saturday that damages the 4-6 Huskies’ bowl hopes. 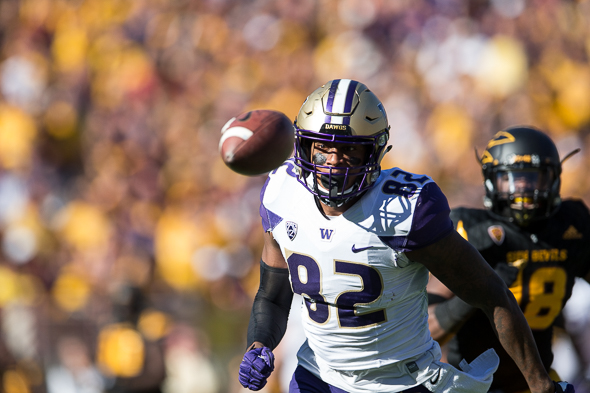 Arizona State not only erased a 17-point first-half deficit, but scored 27 unanswered points and put a serious dent in Washington’s bowl aspirations Saturday with a 27-17 victory Saturday in Tempe, AZ. (box). The Huskies (4-6, 2-5), who squandered a myriad of first-half scoring opportunities and devolved into a late-game turnover machine, must defeat Oregon State next Saturday and Washington State Nov. 27 to become bowl eligible.

Trailing 20-17 with six minutes to play, Washington had a first down at the Arizona State 36-yard line after QB Jake Browning and WR Dante Pettis collaborated on a 28-yard completion. But on the next play, ASU’s Antonio Longino sacked Browning for a loss of eight. Browning then was picked off by Kweishi Brown, who returned the theft 26 yards. Kalen Ballage broke three tackles over 48 yards for a TD to doom the Huskies.

Browning set a UW freshman record with 405 passing yards, which included a 29-yard touchdown toss to Darrell Daniels, but threw three interceptions in the fourth quarter and four times failed to connect with receivers on potential touchdown passes in the first half, including twice to Pettis.

Once ASU roared back to tie at 17, Washington had no further answers offensively. The Huskies largely abandoned their running game in the second half.

The Huskies amassed 547 yards to ASU’s 397, but four turnovers (three interceptions, one fumble) killed four second-half possessions.Washington converted 3 of 13 third-down opportunities (also 1-for-3 on fourth down).

Cameron Van Winkle missed a 46-yard field goal attempt in the third quarter that would have provided a 20-10 lead. The Sun Devils scored on their next possession  — QB Mike Bercovici’s 32-yard TD pass to WR Devin Lucien — to tie.

Arizona State’s offense struggled against Washington’s disruptive defense most of the first half, managing three first downs, 133 total yards and a late field goal. But the Sun Devils dominated in the second half. Bercovici finished with 253 passing yards and a touchdown and Ballage had 92 rushing yards and two touchdowns.

The Huskies did not record a single takeaway against a Sun Devil team that entered the game ranked last in the Pac-12 in turnover margin (-6).

“I think our players are all really frustrated right now. They played hard, but this is frustrating for all of us. We’ve got to execute better and make plays, and we’ve got to continue to build skills. Some of the young guys were a little inconsistent, some of the older guys, too. You feel like everything just has to be perfect for us to move the ball. It’s just not there for us yet” — UW head coach Chris Petersen.

The Huskies travel to Corvallis, OR., to take on the Oregon State Beavers at 3 p.m.  Saturday (Pac-12 Networks).