By dropping to 4-5 after the loss to the Arizona Cardinals Sunday night, the Seahawks almost need to run the table if they are to reach the postseason. 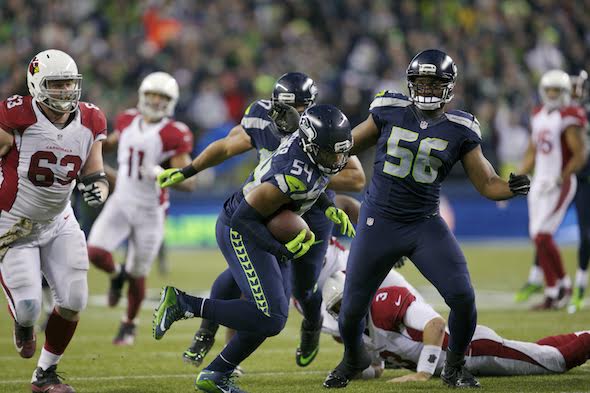 Trailing 19-0 in the second quarter, the Seahawks staged a defense-inspired rally to take a 29-25 lead early in the fourth, but couldn’t stave off the Arizona Cardinals Sunday night and lost 39-32 at CenturyLink Field, a defeat that probably dooms their playoff hopes (box). At 4-5, the Seahawks, trailing Arizona (7-2) by three games in the NFC West, will probably have to win out to reach the postseason. Even a perfect slate the rest of the way might not be enough.

Seattle has had a lead in the fourth quarter in all five losses.

After Arizona took a 19-0 lead on touchdown passes of 35 and 27 yards from Carson Palmer to Michael Floyd, a 33-yard Chandler Catanzaro field goal and a safety, the Seahawks got back in the game on Will Tukuafu one-yard run, a 31-yard Steven Hauschka field goal, Russell Wilson’s 32-yard TD pass to Doug Baldwin and a three-yard TD by Marshawn Lynch.

Bobby Wagner’s 22-yard fumble recovery return for a TD gave Seattle a 29-25 lead early in the fourth, but Arizona scored the next 10 points.

Tailing 32-29 after Palmer’s 14-yard TD pass to Jermaine Gresham, the Seahawks still had a pulse after Russell Wilson and Doug Baldwin collaborated on a 14-yard completion to the Arizona 45. But the Seahawks couldn’t sustain the drive and punted with 6:14 to play. Arizona took the ball to midfield, when RB Andre Ellington surprised on third-down-and-four with a draw play 48 yards down the sideline for the game-breaking score.

Effective in spurts, Wilson overall had a poor game, completing 14 of 32 passes for 240 yards, one TD and one interception for a passer rating of 67.2. He rushed for 52 yards. Seven of his completions went to Baldwin, who had a season-high 134 yards on 10 targets.

Wilson targeted TE Jimmy Graham eight times. Graham caught three for 41 yards, but couldn’t hang on to a ball in the end zone that should have been a touchdown.

With 115 yards, the Seahawks didn’t generate much of a rushing game. Marshawn Lynch, questionable before the game, finished with 42 yards and Thomas Rawls had 19 yards on two carries.

Tukuafu’s touchdown was the first of his NFL career.

The top two defensive plays by Seattle were made by Cliff Avril and K.J. Wright/Bobby Wagner. Avril caused a fumble in the fourth quarter that Wright recovered, setting up Lynch’s touchdown. Wright had a strip sack in the same quarter that Wagner recovered and returned for a touchdown, giving Seattle a 29-25 lead.

Palmer had 235 passing yards at halftime, the most the Seahawks have allowed in the first two quarters in the Pete Carroll era. Palmer, who played for Carroll at USC, finished with 363 yards and three TDs.

CB Richard Sherman not only was flagged for pass interference, he blew a coverage on Floyd’s 27-yard TD catch from Palmer that gave Arizona a 12-0 lead in the second quarter.

S Earl Thomas prevented a touchdown when he picked off Palmer in the end zone in the first quarter after Palmer had orchestrated a 15-play, 75-yard drive.

Kam Chancellor was in on 19 tackles for the Seahawks and was credited with seven solo stops.

“I think we’re pretty good. We’ve got a lot of things to clean up, but to come in here in this environment and win, well, I couldn’t be more proud. We had some issues in the second half, but we managed to finish the game off” — Palmer

The Seahawks play the second of three consecutive games at CenturyLink Field Sunday when they host the San Francisco 49ers at 1:25 p.m. (FOX). The Seahawks defeated San Francisco 20-3 at Levi’s Stadium Oct. 22.