The offensive line is in over its collective head, which everyone knew in training camp. Harder to explain how Russell Wilson and Jimmy Graham can’t function on a basic level. 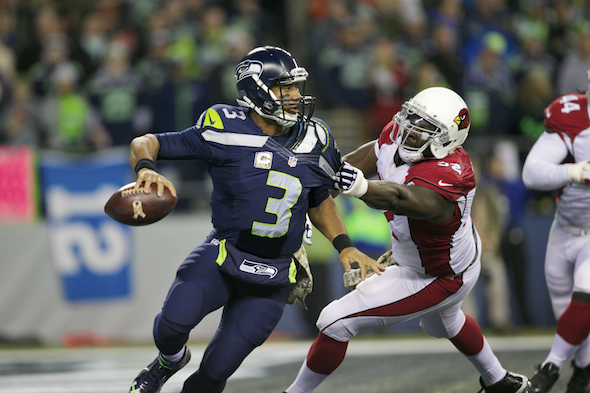 The Seahawks defense did a lot to win the race — cleaned the stables, fed the horse, saddled it, rode hard and went to the whip. But when the race becomes a mile and a half instead of a mile, the best thoroughbreds wear out.

Asked what it was like to spend 40 minutes chasing around one of the NFL’s best offenses, DE Cliff Avril, the star of Seattle’s comeback, was blunt.

It sucked because, well, the offense sucked.

The Seahawks’ season-long gamble to try to make a respectable line out of ordinary guys reached the crucible. On the Sunday night national game against the NFC West-leading Arizona Cardinals in front of another rabid sellout home crowd, the gamble failed spectacularly.

After the 39-32 loss, they are 4-5, requiring a miraculous combination of events to get a wild-card playoff berth.

At halftime, the Seahawks had seven points, six first downs, 62 yards in penalties and 89 yards of offense in 18 plays. They looked like a small college team at spring practice instead of a team coming off a bye week knowing the season largely rested upon a successful outcome.

Yes, the Seahawks whooshed back to take a 29-25 lead with 13 minutes remaining. But just as they had in their four previous losses, they couldn’t hang on to a late advantage. The five games lost after a fourth-quarter lead is the NFL high.

Coach Pete Carroll, who likes to think he has seen about everything, bordered on shock.

“It was really disappointing that we put out such a miserable half of football,” he said. “We don’t play like that.”

They did Sunday. Fourteen penalties for 131 yards, including critical O-line blunders in the first half, is characteristic of a young team on the come, not a two-time defending NFC champion. At least RT Garry Gilliam, LG Justin Britt and C Patrick Lewis can claim to be new on their jobs. It’s not their fault they are in over their heads.

Much more mystery attends two veterans, QB Russell Wilson and TE Jimmy Graham. So much was expected of them. Delivery, however, has been spasmodic.

Wilson’s good-play/bad-play ratio has dwindled this year. Graham has never quite caught on. Or simply caught.

The tandem’s futility was captured after the defense performed its final rescue, badgering Arizona QB Carson Palmer into a sack-fumble on a hit by LB K.J. Wright, followed by a 22-yard scoop-and-score by LB Bobby Wagner with 13 minutes left.

The Seahawks attempted to pad the 29-25 lead with a two-point conversion. Having looked bad on a previous deuce attempt, this time they pushed out 6-foot-7 Graham wide to the right, where he had a one-on-one matchup with Tyrann Mathieu, a good safety who is nevertheless is 5-foot-9.

The formation fairly screamed for a rollout pass, which is what Wilson did. All he had to do was loft the ball softly almost anywhere in the right quarter of the end zone, where a desperate Mathieu was fronting Graham, like a basketball point guard stuck after a defensive switch on a bigger post player.

Instead, Wilson inexplicably threw the ball low, where Mathieu couldn’t have asked for better. Graham had no chance to use his height, and Mathieu batted away the attempt.

A cynic might suggest that Wilson must have left his game on the Mexican beach where he and beau Ciara spent the bye week, flaunting it on her Instagram account. That probably isn’t true, but a 14 for 32 passing performance, including a brutal miscommunication with Doug Baldwin on a throw that was easily intercepted, is hard to explain at this stage of his career for so significant a game.

“I misjudged it,” Wilson said. The play, not the vacation.

“He’s subject to what happened in the first half — we were so far behind the sticks that you can’t tell,” he said. “The second half, he made some things happen . . . there’s always some throws in there that he could do better.”

Certainly, Wilson is a bit of a victim of the expectations he helped create. It’s also true that after the battering he has taken behind what is likely the NFL’s worst offensive line — two more sacks pumped his league-leading total to 33 — he is entitled to some yips. But it doesn’t take a lot of will to throw a ball where a 6-7 guy can reach it.

Then again, after three drops, Graham isn’t the guy he’s supposed to be either. He was targeted eight times and made three catches for 41 yards. That doesn’t have much to do with the line.

Offenses can be complicated things; certainly it seemed so in the second quarter, when Wilson dropped back from Seattle’s 12-yard line for a screen pass and suddenly found himself  in a jailbreak pass rush.  In the mayhem, he bumped into his own man, LT Russell Okung, and ball squirted free into the end zone, where Wilson jumped on it to surrender a safety instead of a touchdown.

But offenses are not as complicated as the Seahawks made it look Sunday night; like a small college in spring ball.

The race isn’t necessarily over for the Seahawks. But having to avoid losing to themselves as well as the opponent makes a playoff hard to see from here.