QB Russell Wilson’s ratings in the fourth quarter and in the red zone have eroded significantly since his rookie year, leaving the Seahawks a playoff longshot. 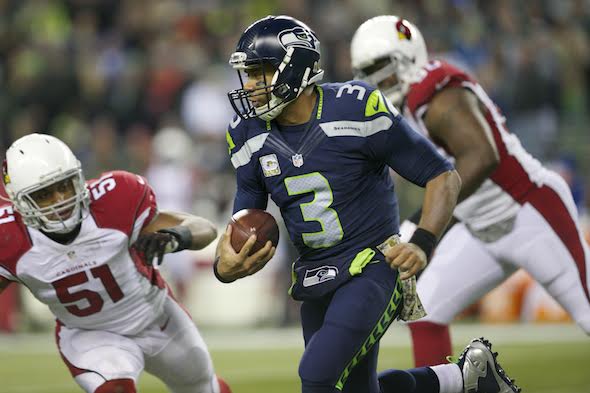 Russell Wilson has been an enigma all season. / Drew Sellers, Sportspress Northwest

Had the Seahawks defeated Arizona Sunday, and they had ample chances before losing 39-32 at the Clink, they would have pulled within a game of the Cardinals in the NFC West. Instead, they have fallen three behind with seven to play, making a third consecutive division championship a practical impossibility – even with a favorable schedule (four of the final seven at home) the rest of the way.

For quarterback Russell Wilson, whose good play/bad play schtick is as enigmatic as it is irksome, the key to the next seven weeks is all about attitude.

“The biggest thing is that you have to keep your head up because it’s not like we don’t give ourselves a chance,” Wilson told reporters after Seattle’s fifth fourth-quarter gag in nine games. “We didn’t give ourselves a chance in the first half, but in the second half, by the way we fought it shows our resilience, it shows our never-say-die mentality, and we have to lean on each other, especially right now.

“We have to go back to work and study, and love the game, love each other for what we’re trying to do. It’s not going to be easy. If it were easy, anybody would do it. This is why it’s worth fighting for. You have to go out there and continue to stay the course.”

Commendable words. But it is difficult to see a playoff berth from here even if one is out there.

Since Pete Carroll assumed command of the Seahawks in 2010, six teams with five or more losses after nine games almost inexplicably reached the postseason. The 2012 Washington Redskins, led by rookie Robert Griffin III, had six losses in their first nine and still made the playoffs, only to get snuffed in the wild card round by Wilson and the Seahawks, who lost a week later in Atlanta when they flopped defensively on the Falcons’ final drive.

The six clubs — 60 teams have made the playoffs since 2010 — with five or more losses in their first nine games that reached the postseason:

Given that none of six advanced beyond the divisional round of the playoffs more than suggests that the Seahawks’ Super Bowl window of opportunity has probably slammed shut.

When the autopsy on this year’s Seahawks is performed, Wilson will be near the head the list of reasons why a team with such a talented roster so spectacularly under-performed. This year Wilson has demonstrated, too infrequently, a remarkable knack for moving Seattle’s offense down the field in a blink.

Wilson directed two such drives Sunday, 80 yards in 2:10 that Will Takuafu ended with a one-yard TD run, and 69 yards in 1:37 that Wilson finished with a 32-yard TD fling to Doug Baldwin.

But Wilson has also orchestrated dozens of drives that have resulted in squat, particularly in the fourth quarter, most particularly when the Seahawks have taken the lead. That’s when Wilson has been at his worst, and when a great quarterback should be at his best.

Four years ago, as a rookie, Wilson had a 102.5 passer rating in the fourth quarter and a 107.5 rating in the red zone, where he threw 18 touchdown passes without an interception. Pine for those days. This year, Wilson has tossed only three red zone TDs with one pick.

Notice how Wilson’s passer ratings in the fourth quarter and in the red zone have eroded since his rookie year:

Oddly, Wilson is completing a higher percentage of his passes this season – 65.8 percent – than in any other year. But he has seven interceptions, matching the total in the entire 2014 season. Worse, he’s thrown dumb interceptions, such as the deep ball to Baldwin in the third quarter Sunday that Tyrann Mathieu easily picked off and returned 24 yards.

Wilson’s offensive line isn’t any good. He’s been clobbered more than any quarterback in the league. Perhaps that’s why he doesn’t seem to have his head in the game consistently this year.

Pete Carroll Monday bemoaned Seattle’s first four drives against the Cardinals, each of which featured a major penalty, saying he could not recall a worse start. Well, there wasn’t one in his Seattle tenure. The first four drives: