Lamenting the aftermath of another wrenching loss to a good team in a close game, Seahawks coach Pete Carroll sent the game plan was dismantled because of field position following penalties. 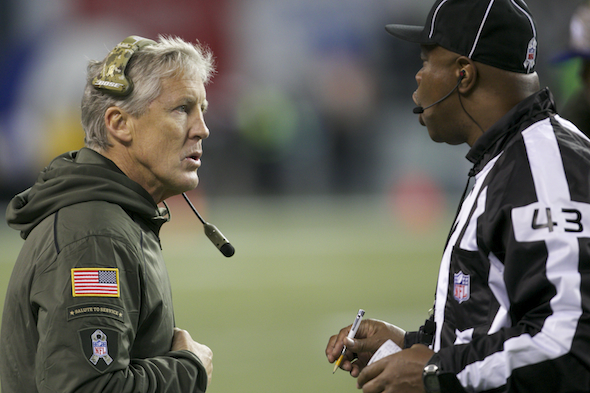 On the Seahawks calendar, it was Tell the Truth Monday — or Morose Monday, whenever they have played a good team in 2015. Except for this Monday, when coach Pete Carroll was sardonic.

“It’s really a shame — we had a really good game plan,” Carroll said of the 39-32 loss to Arizona Sunday. “You might have liked it.”

Carroll claimed fans at the Clink and a national TV audience never saw the plan, not when major offensive penalties compromised the start of Seattle’s first four possessions and allowed Arizona to race to a 19-0 lead.

“I don’t ever remember a game where your first four drives start first-and-20,” he said, sounding genuinely bewildered. “When that happened, we would wind up in third-and-whatever. We couldn’t convert.”

It was, in fact, four random acts of unkindness for which there is neither connection nor explanation.

First possession: After one first down, a face-mask penalty on TE Luke Willson (not RT Garry Gilliam, as officials first called it) made it first down and 25 at their own 28-yard line.

Third: Willson again, holding, for first-and-20 at the 12 (produced a sack/fumble that turned into a safety).

On the fifth possession, the Seahawks played penalty-free and took an up-tempo version of the offense 80 yards in six plays, which included a pass interference penalty on Arizona FS Tyrann Mathieu, for a touchdown to cut the deficit to 19-7.

“It just didn’t happen the way we planned at all,” Carroll said. “Then the game changed: We got back to making sense. In the drives we didn’t have penalties, we scored. When we had major penalties, we couldn’t overcome it.”

It was a little more complicated than that, but his point is well-taken. What he didn’t mention was that in years past, the Seahawks often had the talent to overcome such setbacks. They’re not there yet, not after paying championship salaries to championship winners.

And even when they have championship players, sometimes they don’t play like it. CB Richard Sherman was beaten for Arizona’s first touchdown pass by Cardinals WR Michael Floyd when Sherman committed to covering a receiver on a shorter route. In the fourth quarter, safeties Kam Chancellor and Earl Thomas both messed up covering TE Jermaine Gresham on a 14-yard TD pass.

Even the coaches sometimes get outsmarted. On the game’s decisive play, the 48-yard draw that backup RB Andre Ellington took to the house for a 39-29 lead with 1:58 remaining, Arizona coach Bruce Arians outmaneuvered Carroll and defensive coordinator Kris Richard.

“It was s good choice by them — maybe they recognized we were coming,” Carroll said of a failed blitz. On third-and-four at the Seattle 48, the Cardinals bunched three receivers to the right and left a single wideout on the left. Palmer lunged to his left to hand the ball to Ellington.

“We had a blitz that should have hit (Ellington) him in the backfield,” Carroll said. “The left guard reached us and the ball popped where it’s not supposed to go. They had a screen going on the other side, so there’s very few (defenders) left. Kam (Chancellor) had the first chance and didn’t get to it, and we got blocked.

“It was a beautiful job of executing the draw play.”

The upshot of multiple, game-long miscues was that Arizona had 84 plays to Seattle’s 52. That sort of disparity that wears down the defense is what happened in the other lost-lead defeats this season.

“There’s a common thread there,” Carroll said. “When you get into (opponent play numbers) in the 80s, that’s a lot of plays. When you get to 78, 79, 80, those are the ones that make the difference in the game.

We don’t want to be in that situation.”

Despite all the penalties and mishaps, the Seahawks, remarkably, came back to lead, 29-25, with 13 minutes left. Then the defense did itself in on Arizona’s next possession.

The drive looked dead when Carson Palmer threw incomplete on third and 10 at the Seattle 39, perhaps even out of field goal range. But LB Bobby Wagner, who otherwise played a splendid game, was flagged for illegal contact when he shoved a receiver more than five yards beyond the line of scrimmage.

Wagner looked as if the shove was more out of fatigue than foolishness. Carroll was exasperated by some of the officiating calls, but not that one.

Regarding officiating, Carroll sounded despairing, and didn’t see much point in a public diatribe.

“I don’t even know how talk about penalties at his point,” he said.

The easy out is to avoid them. But nothing is easy for the Seahawks this season.