Thiel: Seahawks, 49ers and a fall from greatness

At 4-5, the Seahawks confront the issue of whether money and fame have cost them their championship edge, while the 49ers bench QB Colin Kaepernick for Blaine Gaebbert. How the mighty . . . 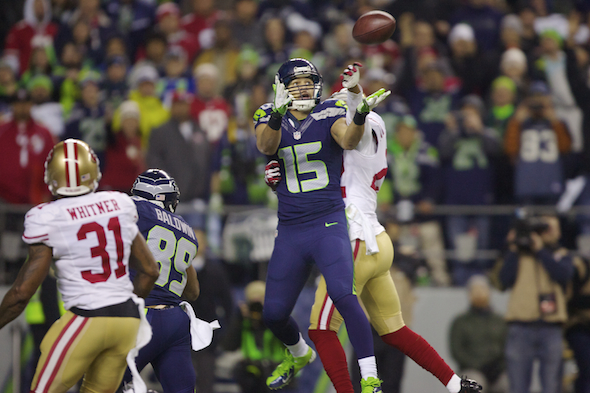 Jermaine Kearse’s touchdown catch in the NFC championship game was among the apex moments in the history between the Seahawks and 49ers. / Drew McKenzie, Sportspress Northwest

Recall what the NFL dungeon looks like. Isn’t that Charlie Whitehurst’s comb in the corner? And here’s Aaron Curry’s well-worn Bible. Over there is a bunch of Jim Mora’s dirtbags.

Remnants of a dark time. But not that long ago.

Then the Seahawks became lords of the manor. And the San Francisco 49ers were the jealous rivals, a swarthy tribe of evil trolls led by the dreaded Har-mongus.

The Seahawks are third in the NFC West at 4-5, just ahead of the last-place 49ers (3-6). Neither enters Sunday’s game as dragon slayers, just draggin’. The dispute is a desultory argument about who gets stuck in the dungeon, not about who rules the fruited plain.

The NFL’s greatest rivalry is ashes, replaced by a bar fight at 2 a.m.

“Sometimes it happens, teams not being able to recover from the success that they had,” said WR Doug Baldwin. “Look at the Buffalo Bills — they lost four Super Bowls in a row (1990-1993) and have struggled ever since.”

Ouch. That’s a tad harsh. But success often does create wicked descent, especially in the NFL. The Seahawks haven’t unraveled as have the 49ers, riven by ownership-coach dissension. After an 8-8 season in 2014, coach Jim Harbaugh and what seemed like half the roster fled the lumpy sod of Levi’s Stadium.

Most of the Seahawks stars remain from the Super Bowl win and the Super Bowl loss. But in 2015 they have yet to beat a quality team, only mediocre outfits like the Niners, who dropped a 20-3 result to Seattle in Santa Clara over the 49ers a month ago.

Now, however, after losing to new NFC West division powerhouse Arizona 39-32 Sunday, the Seahawks are closer to the divisional back end than the front end, forced to confront the issue to which Baldwin referred — whether the big-money contracts and glory have robbed the Seahawks of their edge.

“Anything can affect your play, your personality, your demeanor, with distractions,” he said before practice Wednesday at the VMAC. “It can be overwhelming. It’s not just the contract, its the fame, the lifestyle, all of it goes into it.

“The guys in this locker room handle themselves pretty well.”

But the results suggest that a loss of hunger is a part of the problem.

“For me, I go out and battle every day,” Baldwin said. “I go up against Richard Sherman every day and see him battle. To me, there’s no difference. We want to win so bad, it’s never been about the money.”

Perhaps. But Baldwin is unlikely to rat out a teammate publicly even if he did detect a flagging effort.

Still, if they do succeed this year, the Seahawks will have swum against the fierce current of human nature as well as NFL salary cap rules, which combine to say “Fellas, you’re goin’ down.”

The five losses all have been against teams with winning records and have included fourth-quarter Seattle leads, so it isn’t as if the Seahawks are being walloped by sledgehammers. But beating good teams has been a hallmark of Pete Carroll’s teams, especially at home, where they have lost two in a row.

“I’m disappointed that we haven’t taken advantage of some fantastic chances,” he said Wednesday. “Three great teams we’ve played, three great opportunities to win all those games . . . and those getting away, that’s frustrating.

“We were good enough to win those games. I don’t want that to be the story of this season. I want to get this thing rolling so that isn’t the story and we have a chance to do some really good things at the end of the year. We’ve got a long ways to go to get that done.”

But the sad story prevails, even if they beat the 49ers, a 10-point underdog, as expected. This year’s team can’t escape the shade thrown by the past two, and even three, Seattle teams, particularly along the offensive line, the season-long weak link.

Assistant coach Tom Cable said that in the group meetings Saturday night before the Arizona game, he tried to separate his players from the burden of previous deeds.

“I told them every team has its own journey,” he said. “You decide in July/August what you want to be and eliminate the distraction, cut out the noise. We’ve been good at that in our past. We haven’t played like that yet. So we keep working until we get it right.”

However despairing the journey, they can at least say their captain, Russell Wilson, remains upright and taking solid food, unlike most QBs in the NFL these days.

In San Francisco, Colin Kaepernick, a longtime victim of badgering by the Seahawks defense, has been replaced by backup Blaine Gaebbert, a Missouri grad and former first-round pick by Jacksonville who flamed out spectacularly before the 49ers threw him a rope in March 2014 by acquiring him for a sixth-round pick.

In his first start of the season Sunday, Gaebbert somehow led the Niners to a 17-16 win over Atlanta. Should he manage a similar stunt at the Clink Sunday, he may well inspire some among the 12s to demand the Seahawks do the same as the 49ers, and start Tarvaris Jackson.

That would be the sort of thing that happens when the stumble to the dungeon begins. People grab at anything.