Sounders eyeing future near and far

With a solid but aging roster, the Sounders have the difficult chore of creating a team annually capable of winning the MLS Cup while finding young players to help the long term. 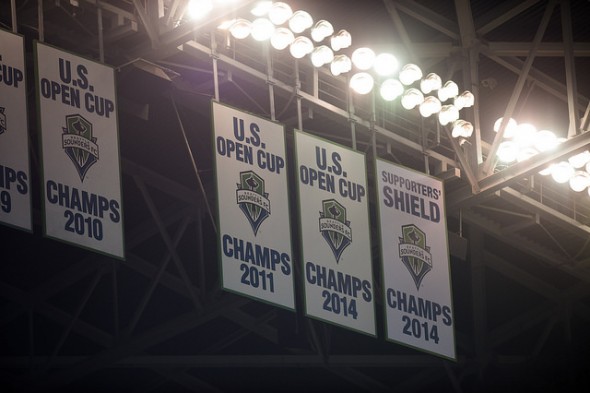 The Sounders face the twin tasks of hanging an MLS Cup banner soon, while building a future that will, in their minds, raise many other banners. / Jane Gershovich, Seattle Sounders FC

How does a team balance building for the future while pressing for immediate success? That will be the offseason challenge for the Seattle Sounders, whose lack of youth and depth was apparent during a woeful summer and when they were bounced from the playoffs by FC Dallas in a penalty shootout Nov 1.

The MLS Cup remains Seattle’s Holy Grail. The team is certain that it exists, through legends related by a wizened member of the old guard, but the team has never caught a whiff of its rapture.

That member of the old guard, Sigi Schmid (who won the Cup with Los Angeles in 2002 and Columbus in 2008), said he expected a busy winter.

“This is probably going to be the most eventful offseason in MLS history,” said Schmid Wednesday. “This is going to be the toughest year for players. I think there will be more middle-income players that will get squeezed out by various teams, and I think what you’re going to see in a lot of teams is a group of players who are supported by a lot of young players underneath.”

That last part certainly isn’t the case with the current roster. Of the 32 players listed, 18 are 28 or older. Some of those stars, like 31-year-old Obafemi Martins, still play with the energy of a 20-year-old. Others, like 35-year-old Zach Scott, are showing signs of a long,  taxing career.

Schmid said that he was focused on speed, not age.

“I think we’ve got to become faster,” said Schmid. “There has been a big thing made about ‘young and old,’ but all I know is there are two types of players: Good players and bad players. Obviously, if you can’t run, then you move from the category of good player to bad player. I think we have a number of good players on our team – age doesn’t matter.”

Unfortunately for Schmid, and as anyone who has watched a six-year-old happily run into walls for an afternoon knows, age matters when injuries come into play. Seattle underwent an unprecedented string of setbacks throughout the season, losing more games to tender hamstrings than opposing teams.

Platitudes about old dogs aside, the easiest way to increase speed and recovery time is to increase youth. The front office, in a nod to this, announced a new partnership with Seattle United Tuesday. Founded in 2009, United trains players from U10s all the way up to U18s, with more than 2,000 players in all.

The move is designed to funnel emerging talent into the Sounders Academy, which is still looking for its next great pro ever since DeAndre Yedlin’s rise to stardom.

Jordan Morris, the Mercer Island native, Stanford standout and 2015 Pac-12 Conference player of the year who was recently named to the 23-man roster for the USMNT’s qualifying campaign for the 2018 World Cup, remains the great hope. Though Morris has expressed interest in the past in finishing college, and still has one year of undergrad left, the Sounders are doing their best to entice him into the professional world.

GM Garth Lagerway told members of the media that Morris had been offered “the richest homegrown player contract ever.” Currently, LA Galaxy’s Gyasi Zardes holds that honor, with a homegrown contract worth $223,000 in guaranteed compensation.

Whether Morris decides it’s time to cash in, Lagerway said that moves like the Seattle United partnership and focusing on player development in S2 were crucial to building a bright future.

Lagerway said that greater focus on the development of “role players” throughout the Seattle youth soccer landscape would be crucial to produce local talent capable of donning the Rave Green. Lagerway had criticism for several unnamed local youth clubs, calling them “Balkanized.

“We need to do a better job of working together, where that’s possible. We’re nowhere near the size of LA or New York, and obviously we don’t have the numbers of players on that level, so we have to find a way to somehow be better than them, or at least as good as them.

“That’s going to take some new thinking. We have some archaic, almost fossilized, thinking at the youth soccer level outside of the Sounders organization . . . There certainly are others, but there are some other clubs that haven’t changed in 20 years and are still producing the kind of player that honestly isn’t a good fit for the modern game.”

Lagerway is also looking beyond the Evergreen State in his search for talent. The Sounders GM outlined plans for home-stays for promising academy players, and said that the plan is already in motion. Six out-of-state players in the Sounders Academy are currently in the program, ranging from the U14s to the U18s and including Nick Hinds, a Florida native who has seen time with the USMNT U-15s.

Further development of S2 may help produce long-term talent. The Sounders’ USL team hasn’t been around long enough to be judged on the talent produced. Andy Craven, called up out of desperation for a body up front, proved unready for MLS play during his brief stint with the first team before injury in the summer.

In the present, however, U15s, U18s, and not even the USL will be able to alleviate the Sounders’ issues. The team is faced with the difficult task of investing to provide for the future, while still trying to have a side that can bring home the league title. It’s a bit like trying to reap as you sow.

“I think we are an old team,” said Lagerway. “Over the next couple years, we need to get younger. We are also a good team and so it’s not something where you can attack and make radical changes.

“What we have to have is a succession plan at every position . . . where you have a plan A, and a plan B, and we try to build a roster that is sustainable, while at the same time understanding that given the ages of our best players, we have to take another shot at it next year, we have to try to win an MLS Cup.”

It’s a remarkably level-headed assessment after a frustrating season for the club ended in increasingly familiar disappointment for the team and its fans. The Sounders have until Dec. 1 to exercise roster options, during which span the search for speed, the future, and the MLS Holy Grail will kick into gear.