Some would like to assign the falloff of Russell Wilson to the siren Ciara, but Greek mythology is no match for an offensive line that is the worst in the NFL. 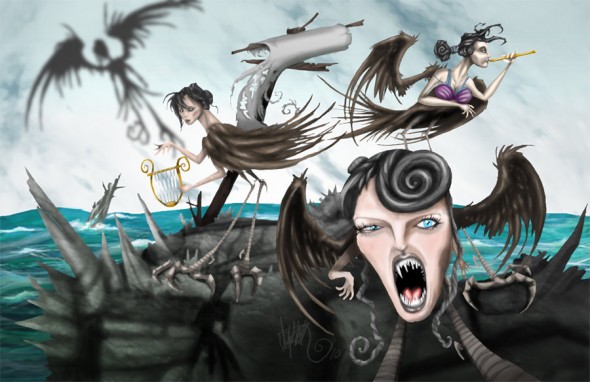 The Sirens of Greek mythology have never been invited to the NFL combine, so they have no football measureables. / Bunny Bennett, Deviant Art

The Sirens beguile him with their clear-toned song, as they sit in a meadow, and about them is a great heap of bones of mouldering men, and round the bones the skin is shriveling. — The Odyssey, Homer (XII.39ff.)

Remember the sepia-toned days of yore, when Russell Wilson was so intense about football practice and study that some fans worried he might die of dork overdose?

Now, after the Seahawks quarterback sashays about a Mexican beach on a bye week with his slinky diva girlfriend and distributes sultry photos to the public, some fans worry that he slipped his moorings to become a sybarite, with minimal concern for improvement in his game.

They all checked the same box:

“Whooo-eeee! Hahahahahaha! Look at me! I’m king of the world! Hot damn — bring me a sturdier chandelier and a case of Dom!”

So we know where they stand regarding Wilson’s off-field pursuits.

In the descriptions of the off-field worlds of top-tier NFL QBs, the word “monastic” almost never appears. OK, yes for Roger Staubach. But after that, life for nearly all can be supposed to have indulged the bacchanals.

How much is too much? Don’t have any analytics to share with you on that. Nor does anyone else. Although hedonism didn’t seem to dent the Total QBR of the aforementioned chuckers.

Then again, none of them dressed as Batman.

In assessing Wilson’s occasionally faltering performance through nine games, the favored  storyline is that Wilson has fallen under the spell of a temptress. It’s easy, because Homer (the ancient Greek, not the Oracle of Springfield) warned us in The Odyssey about hot chicks and strong young men.

That scouting report is 3,000 years old, and still relevant.

But Wilson claims that this scouting report is wrong, at least regarding him, insisting that his romance with paramour Ciara is no cause for his modest falloff.

“I don’t want to go into too much detail, but she’s a great girl,” Wilson said this week, when asked to account for his-and-her roles in the Seahawks’ record of 4-5. “I’m grateful for her and all the things she does.

“But right now, obviously the focus is on football and preparing, and getting ready to win.”

No doubt, because a loss at home to the 13-point underdog San Francisco 49ers Sunday would induce investigation by the FBI, Interpol and the Mossad.

Whether Wilson is being led upon the rocks is a hard thing to prove. What is more likely is that his propensity for sharing his private life is unsettling to some in the over-40 crowd.

In that regard, Wilson seems oblivious to consequences in flaunting personal stuff, be it Bible verses, delusions about nanobubbles, or his photos of frolics on Twitter, Facebook and Instagram. Which makes him exactly like 95 percent of his generation. They have come of age when privacy is not a high value.

“I keep most of it private,” he said. “My private life is my private life. But I think at the same time, there’s no fear in anything or anything like that. I’m grateful for the people that I have in my life. Just the surroundings, from the team, to everybody and my friends.

“I’m sure you’re referring to Ciara too. She’s an unbelievable person.”

We have no choice but to take his word on Ciara, as well as the word of everyone else about social media: Don’t read the comments.

To explain Wilson’s falloff — and it’s not exactly RG III-esque, because he’s on pace for  career highs in passing yards (3,765) and completion percentage (65.8) — in more tangible ways, here is a statement more quantifiable than the unbelievability of Ciara.

He’s had the crap beat out of him.

According to Pro Football Focus, the Seahawks are ranked last among 32 teams in pass blocking. Last. Below Cleveland, Jacksonville and maybe Oregon State.

His 33 sacks are tied for second-most, and account for 181 lost yards. Recall how big a fuss is being made of the Seahawks’ penalties that killed the first four drives against Arizona Sunday. A sack usually is worse, because it includes loss of down.

Pete Carroll finally was semi-honest about it this week.

“I think that when you go back and you realize (33 sacks), it really contributed to stopping the drives,” Carroll said. “It really put us in bad situations. That’s a lot of numbers there.

“When you guys were talking about how many times we were in the red zone, well, there’s a lot of drives that got thwarted because of the sack that we took. So it’s a big factor. I’d like to see that just fade away, not a part of our game anymore.”

He is getting a bit of his wish lately, with no sacks by Dallas and two by Arizona, one for no yards lost and another caused by a quasi-butt-fumble collision with LT Russell Okung that turned into a safety. But the improvement likely is barely noticed by Wilson’s battered psyche.

“It affects the quarterback when you get sacked that much,” Carroll said. “Hopefully this is going to start slowing down and we’re going to see us turn the corner on that.

“But that’s how you disrupt the quarterback, you rush him. He’s dealt with it really well. He’s escaped a lot of stuff and done a lot of good things with it. But it certainly is a factor in terms of being the quarterback.”

The facts are that defenses are better prepared to thwart Wilson’s keepers on the read option, and are allowing him fewer of his maddening reverse-pivot escapes. As a result, his rushing average is down to 5.5 yards per attempt, compared to 7.2 last season.

His touchdown passes are down (10; his career low is 20 for a season) and he’s already matched last year’s inception total (seven in nine games).

But Wilson, Carroll and assistants Darrell Bevell and Tom Cable are eager to talk around the criticism of the O-line. It’s true that public bashing helps nothing. But laying off to Wilson’s misplays most of the responsibility for the failed gamble so far is disingenuous.

Think about this: Drew Nowak, the starting center for six games, wasn’t even active for Arizona, supplanted by Patrick Lewis and Lem Jeanpierre, whom they fired at the end of camp. That doesn’t mean it wasn’t the right move, only that a big part of what went into the months of personnel decisions that created this line included way more guesswork than anyone will admit.

Frankly, the Greek explanation, by the world’s first and foremost sports columnist, is a lot more fun.