Seattle U. eager to rock UCLA in NCAA soccer 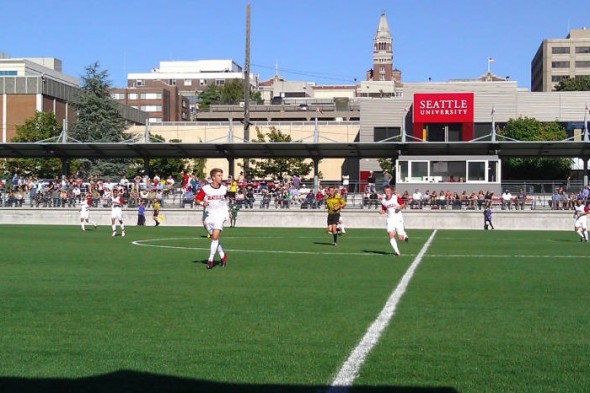 The Seattle University Redhawks re-hired men’s soccer head coach Pete Fewing in 2012; six years after Fewing resigned his position over a dispute with the university regarding the compensation of his assistant coaches. Now the Redhawks are poised to host Pac-12 Conference powerhouse UCLA at 6 p.m. PT Sunday in the second round of the NCAA Division I tournament.

The Redhawks are Western Athletic Conerence champions this season, with a 17-3-1 record that marks a significant turnaround from where the program was four years ago.

Friday, Fewing seemed a man in his element on Championship Field (named for the Redhawks’ 2004 title) amid the cold, sunny afternoon ahead of the clash with the Bruins. He laughed as he juggled with his players, taking time to point out views of Seattle’s surrounding hills as the sun dipped behind nearby buildings. He compared the stadium to Wrigley Field, with its close-in housing, as well as ivy draped over the chain-link fences.

An energized Fewing was ready.

“I’d like to wake up and have it be noon on Sunday,” he said. “We’re eager to get started.”

That attitude is a big part of Fewing’s success, and why the Redhawks have enjoyed such a drastic turnaround after his return.

A fixture of the soccer community, Fewing began coaching at Seattle University in 1988, winning the 1997 NAIA and 2004 NCAA D-II national titles before his resignation in 2005. He went on to coach the Premier Development League Kitsap Pumas to the 2011 national title, and has been a regular member of the Seattle Sounders’ television broadcasts since the team’s jump to MLS play in 2009.

In his absence, the Redhawks struggled after their 2009 transition to the NCAA Division I big time. In 2011, its last season under coach Brad Agoos, the team was 2-13-2, including a 1-9 conference record.

Fewing attributed his decision to return to Seattle University in large part to a conversation he had with university president Father Stephen Sundborg about reconciliation.

In his return season, the Redhawks lost another 13 matches; his second, they were 11-9-4, winning the WAC regular season and postseason tourney after a seven-game winless streak to start.

Progress was pleasant, but not unexpected.

“That was the plan,” Fewing said. “The plan was to turn it around. We’re not surprised that we’re ranked where we are (11th nationally). We’re thrilled to be hosting the second round game.

“Nothing’s come to us without a lot of work.”

A lot of the credit for the turnaround, according to Fewing, belongs to his assistant staff, several of whom he has worked with for almost two decades, and in defense of whose jobs he first resigned his position at SU.

Assistants Jeff Kock and Bill Colello go back nearly two decades with Fewing, while Nate Daligon, a former Sounder in the late 1990s, is in his third year. Vince Volpe is in his first season.

“Those guys all bring something really special to this group,” he said. “I think we sometimes just look at each other and (know what to do) without a word. We all have some fundamental principles that we stick to, but it’s not a bunch of yes-men.

Credit too, goes to player quality.

“I like the talent level,” said Fewing. “We have individual talent in every position and depth. We’ve got five forwards and eight midfielders.”

Senior forward Michael Roberts, whose freshman year coincided with Fewing’s return, said hosting UCLA was a personal vindication for his choice to join a program that was down as he was finishing high school.

“(Hosting UCLA) is like a dream come true,” said Roberts. “We’ve been talking about getting to the spot that we’re in since I was a freshman. This year, there’s a great friendship between the players.

“(My freshman year), everybody kind of bickered at each other when the losses came. You didn’t know who to blame it on. Coming from that experience, this is so much better. We’re getting along, we’re having fun, and we’re winning. That’s what this is all about.”

As part of a larger conference with a long tradition of success, UCLA is a stiff challenge. The Bruins (11-8-1) have a local touch, former Sounders Academy player Seyi Adekoya, a sophomore, led the Pac-12 in goal-scoring this year.

“(Adekoya’s) a handful; he reminds of Jordan Morris,” Fewing said. “He can beat you in a number of ways. I think he’ll be a pro someday.

“Seyi’s good; we couldn’t get him to return our (recruiting) phone calls. That’s not a knock —  when he was coming out (of high school), we weren’t that good.”

Now, for Fewing and the Redhawks, things are different. Regardless of Sunday’s result, the moment furthers long-term goals.

“It’s really valuable with the internet,” said Fewing. “Everybody looks and they go, ‘OK, a top-15 program.’ We get emails now from around the world daily.

“It’s helping a lot. We can’t quite keep up with the volume of interested recruits, and guys that we called in the past are now calling us back.”