Washington State dispatched Colorado 27-3 Saturday night to set up an anticipated Apple Cup clash with Washington, but QB Luke Falk left the game with a head injury; his status is unknown. 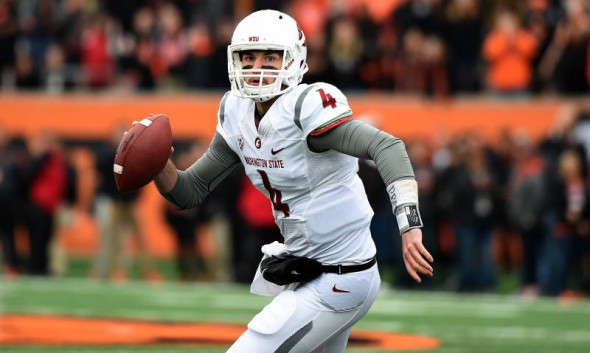 Luke Falk was taken off the Martin Stadium field with a head injury Saturday night in the 27-3 win over Colorado. / Washington State athletics

PULLMAN – Washington State’s extended stay in college football’s nether regions has taken some juice out of recent Apple Cups. The prospect of the nation’s leading passer coming to Husky Stadium with the revived Cougars would certainly heighten interest in the annual grudge match with Washington, but it remains to be seen if Luke Falk will be on hand for Friday’s game.

WSU’s workmanlike, 27-3 victory over Colorado was marred Saturday night when Falk was slammed to the artificial turf midway through the third quarter. Falk lay face down and motionless at midfield for some time. After several minutes, Falk was placed on a stretcher and taken off the field on a cart. He raised both thumbs to the cheering crowd at Martin Stadium.

Falk’s helmet hit the turf, so a concussion may have resulted when he was tackled around the waist on a sack by Samson Kafovalu. As usual, the Cougars refused to discuss injuries publicly.

In fact, coach Mike Leach threatened to walk out of his post-game press conference after brusquely saying,  “Next question,” each time when three reporters asked about Falk’s health. It might not be known until game time if Falk will face the Huskies (12:30 p.m., FOX).

“Luke’s an awesome player,” said Peyton Bender, the redshirt freshman who filled in for Falk the rest of the game. “He’s had a great year.

“I don’t know what happened (Falk’s injury). Hopefully, he’s all right and he can get back to playing for us.”

Bender has displayed a strong arm and equal measures of potential and inexperience during limited action this season. Saturday, in his most extensive action, Bender completed 13 of 22 passes for 133 yards, one touchdown and one interception.

“When we were in fall camp, we didn’t know who (Falk or Bender) was going to be the starting quarterback,” wide receiver Gabe Marks said. “It was tight all the way.”

“It came down to the wire,” Bender agreed. “I thought I was going to be the one, but I wasn’t, unfortunately.

“It’s all right. The season has been great.”

Marks added to the great season of the Cougars as a whole and himself as an individual when he caught his 14th touchdown pass, a single-season school record. It was Bender’s second TD pass, his first coming last week when Falk was shaken up and temporarily left the game for concussion tests that he passed.

Marks, one of the greatest receivers in WSU history, lightened the mood in the press room when he playfully responded to a reporter’s claim that he’s not all that well known in Seattle.

“They don’t know about me?” Marks responded, properly incredulous. Marks then went for the kill:

Marks also had some fun with his good friend Taylor Taliulu, WSU’s senior strong safety. After 44 games and 33 starts at WSU, Taliulu finally recorded his first interception in the fourth quarter. He returned the pick 42 yards.

“You got nervous (on the return),” Marks told Taliulu.

“Yeah, I did get nervous,” Taliulu admitted.

“I saw you, you tightened up,” Marks said.

“I did tighten up a little bit,” Taliulu said. “I was running down the sideline and I was like, ‘I don’t know if I can cut back.’”

“No burst,” Taliulu agreed. “But hey, it was really exciting.”

Taliulu joked that he was “just waiting for Senior Night” to make his first interception. Taliulu and WSU’s 15 other seniors – including star left offensive tackle Joe Dahl, who wore a protective boot on his left foot when the seniors were introduced prior to the game – helped the Cougars dominate the injury-riddled Buffaloes on both sides of the ball.

“We didn’t go out there with fight, like coach (Mike) MacIntyre told us,” Colorado running back Phillip Lindsay said. “It showed on the field.

As recently as last year, the Cougars experienced similar feelings when they were immersed in yet another rebuilding year. The rebuilding process continues at Colorado, but the work seems largely complete at Washington State.

Falk and Bender combined for 332 yards passing, and Gerard Wicks ran for a career-high 123 yards. The special teams were solid, and the defense yielded just 323 yards and the fewest points since a 42-0 win over Idaho in 2013. It was the fewest points WSU allowed in a conference game since a 24-3 win at Oregon State in 1996.

“I thought our defense played extremely well in the second half (in particular),” Leach said.

Leach was unusually gracious after the Cougars won a third consecutive conference game for the first time since 2003. He singled out several players for praise, even going so far as to label former walk-on nickel back Parker Henry “one of the greatest overachievers I’ve ever coached.”

It’s always nice to have overachievers like Henry, but Leach and his players take comfort in knowing they no longer have to overachieve to compete on a weekly basis. The Cougars are 8-3 and tied with Oregon for second in the Pac-12 North Division at 6-2. Fifteen points separate WSU from an undefeated season.

Win Friday at Washington and then in a bowl game, and the Cougars will tie the school record of 10 victories. The Huskies have won two straight Apple Cups, five of the past six and three in a row in Seattle, but the Cougars have proven they’re the real deal. They just hope they don’t have to try to prove it without Falk Friday at Husky Stadium.